Julie White’s performance in POTUS begins at High C—with the C-word—and continues in italics for the next 110 minutes. A considerate journalist might think twice before interrupting her vocal rest during her downtime, but White, in her folksy down-home fashion, refuses to be fussed over or coddled.

She will explain she’s just doin’ what comes natur’lly: “I’ve always had the voice of the mom who could stand outside the house and yell ‘SUPPER!’ We’re sort of a loud group back in Texas.

“When I took over for Sigourney Weaver in Vanya and Sonia and Masha and Spike, a friend of my grandmother’s came up to see the show. She was already in her 90s, and she was using one of those assisted hearing things for the first time. I asked her how it worked. She said ‘Pretty good.’ ‘Well, could you hear me?’ I asked. She said, ‘Oh, honey, you are a blessing to deaf people.’”

Strong lung power is a prerequisite when you’re White House Chief of Staff, the right-hand woman to a major male mess-up occupying the Oval Office. So too is a skill for affixing the President’s mark to important papers and mopping up after his manifold mistakes. Three or four times during the play, characters remark that White’s Harriet is more Presidential than the real McCoy. (POTUS comes with a subtitle: Behind Every Great Dumbass Are Seven Women Trying to Keep Him Alive.)

White’s opening war-whoop occurs when Press Secretary Suzy Nakamura informs her of a crude remark the POTUS has just made in a roomful of diplomats about the First Lady (Vanessa Williams). The trick then becomes how to keep the offending word away from a nosy news-hen (Lilli Cooper). Other dark clouds forming: the President’s pregnant girlfriend (Julianne Hough) and his Presidentially pardoned, drug-dealing sister (Lea DeLaria).

Playwright Selina Fillinger was 24 years old and barely out of Northwestern when she started writing POTUS four years ago. She didn’t know—or perhaps just didn’t care—that you don’t start a play with the C-word. Or that farce is a lost art on Broadway (save for the occasional and infrequent sightings of Noises Off). She just went ahead and wrote a dandy comedy.

“Isn’t it interesting that it took a very, very young person to bring farce back?” White points out. “We tend to slavishly follow the rules of playwriting. The brilliant thing about Selina is she broke the rules by letting the engine of the farce be a woman. Suzy Nakamura and I are getting to play the Nathan Lane/Matthew Broderick roles. It’s really fun to do these kinds of parts for a change.”

White did a reading of POTUS way back in the summer of 2019. “The idea was that we were going to start rehearsals in the summer of 2020 and have it up and running during the Presidential election of 2020,” she says. “The pandemic cancelled all that. I remember thinking, ‘That poor girl! To come so close to making her Broadway debut with this play and have this rotten thing happen!’”

Then, last winter, while White was in Los Angeles finishing up a show for CBS, her agent called. “Well, guess what’s back!” she said. “It’s POTUS, and it starts rehearsal, like, NOW!”

White soon found herself on the express track. “It came together again quickly. We were not even going to be in this season. We were scheduled to open after the Tony deadline, but, once we got into rehearsal, Susan Stroman, our fearless leader, said, ‘Nope. You guys are going to be ready. Let’s get in under the wire and be a part of this season. I think we’re all signed on till the middle of August. I hope people will find us because they are going to have a great time!

“I couldn’t ask for a better gang,” beams White, who, being the chief problem-solver of the play, pretty much leads them all in the comedy charge. She was even submitted for Best Actress Tony honors, but the Tony committee downsized her to Featured Actress (as they did Uzo Aduba and Phylicia Rashad who came across in what seemed to be star parts in Clyde’s and Skeleton Crew).

This new configuration puts our star in competition with POTUS’ mousy little secretary (Saturday Night Live’s Rachel Dratch, a major source of fun in her Broadway bow). “She’s the gatekeeper,” is how White describes that role. “You’re supposed to go through her to get to the President. You get the feeling that she is a relatively new hire. She has a lot of skills but not a lot of confidence.”

At one point, Dratch accidentally partakes of some of DeLaria’s hallucinatory drugs and spends the rest of the play beyond human repair, wearing a pink inner tube or draped in the American flag, muttering “Are my feet touching the ground?” or “I feel like the air is stabbing my face.”


“Once Rachel takes those drugs, it’s like being on stage with a little animal,” White confesses. “Very kindly, she will sometimes turn upstage so we can continue to do the play because, once she is doing anything, that’s all that people can look at. What ‘Stro’ does so beautifully is direct your focus. With so many scenes that have all seven of us on stage at once, how you’re tossing the ball around is important. A lot of people come back to see what they missed while laughing.”

Stroman, known as both a choreographer and director, was an inspired choice to direct POTUS. Her musical timing is ideal for farce—but old habits die hard: the cast break into musical numbers in the homestretch. For White, it’s sort of a musical comeback.

“My first part was Miss Adelaide, and then I did a production of The Baker’s Wife, the Stephen Schwartz-Joe Stein musical, in my hometown of Austin. I was, like, 18, and they came and saw it and were very encouraging. I did the backers’ audition for them. Whenever I see Stephen Schwartz, I say, ‘Hey, man, thanks for the career.’ I thought I could really sing. My first show in New York was Lynn Aherns and Stephen Flaherty’s Lucky Stiff, and—do you remember that mean critic, John Simon? He said—I’ll never forget it—‘She’s a nice enough Goldie Hawn clone, if you like that sort of thing, but she can’t sing.’ That did it. That scared me off. I took him to heart and decided I’m not going to do that anymore. Besides, Broadway singers are so good.”

The unmusical Julie White has done alright for herself just sticking to comedy. She won a Tony in 2006 for Douglas Carter Beane’s The Little Dog Laughed, playing a high-pressured Hollywood agent trying to talk her A-list male movie star back into the closet. There have been three more Tony nominations (for Airline Highway, Gary: A Sequel to Titus Andronicus and, now, POTUS).

“It takes a lot of energy to be an actress on stage, but I know that’s how Broadway is,” she says. “It just takes. Those two hours of the play are like 14 hours of regular time jammed into two.”

No doubt about: this lady has earned her vocal rest. 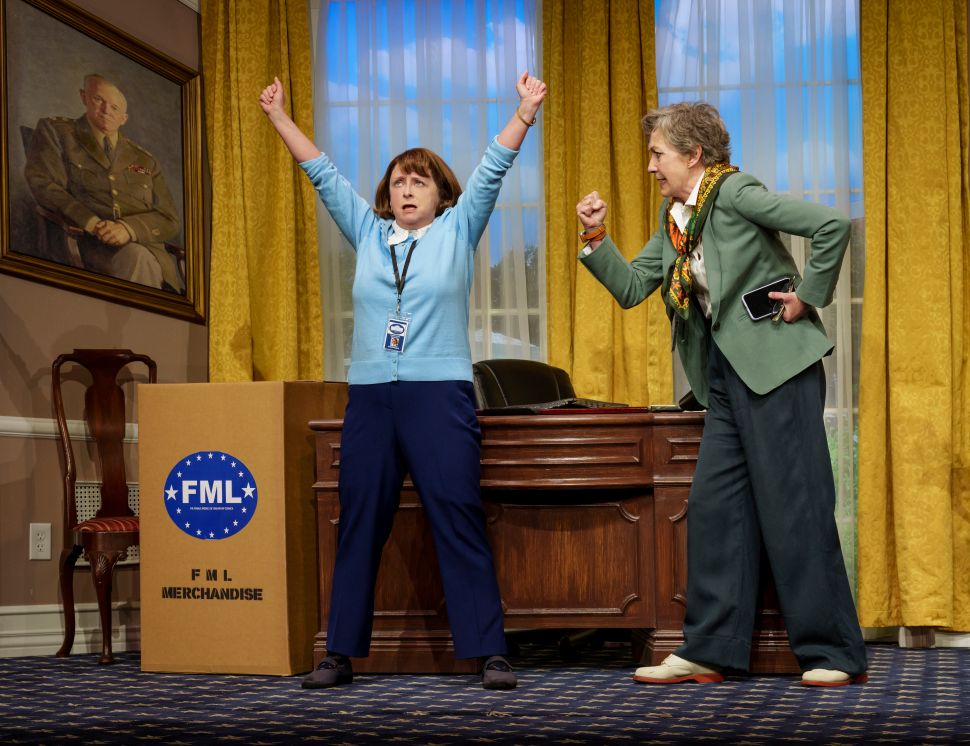