Tom Silver understands why New Yorkers don’t like the noisy helicopters that clog their skies. But that doesn’t stop him from taking them to the Hamptons 10 times a year. “For me, avoiding traffic is essential,” said Silver, a 59-year-old real estate agent.

“I hear helicopters every day,” said Shelah Leader, a retiree who has lived on the Upper East Side for 12 years. She not only hears them from her apartment, but during her daily outings in Central Park and strolls along the Hudson River. “Places that used to be refuges are simply overwhelmed by helicopter noise,” Leader said, before pausing abruptly. “I hear one right now! Outside my window.”

The increase in complaints helped drive the introduction of legislation prohibiting non-essential flights from operating at the city-owned heliports, which are overseen by New York’s Economic Development Council (EDC). A New York City Council bill introduced last week would ban helicopters used for tourism and short-distance travels from the lower Manhattan and East 34th Street heliports. A third heliport, located on West 30th Street, is operated by the state and wouldn’t be affected by the legislation.

New York residents have been pushing for this type of law for years, pointing to the noise pollution and environmental impacts generated by these flights.

The lower Manhattan heliport at East River Piers sees 30,000 helicopters take off each year, according to the EDC, while the East 34th heliport is capped at 28,000 flights annually.

“We have the most intrusive helicopter traffic of any North American city, and it’s been allowed to spiral out of control,” said Adrian Benepe, a former New York City parks commissioner and a member of Stop the Chop, an organization trying to restrict helicopter flights. “It’s wealthy people flying over regular people, dumping ridiculous amounts of noise pollution on them.”

While some helicopters are used by the police or news stations, non-essential helicopters are used for sightseeing and commutes, the latter of which has been spearheaded by Blade Air Mobility, which operates helicopters and small planes. Blade charges $1,025 for a one-way trip for a single passenger to the Hamptons from Manhattan.

Blade did not return calls and emails requesting an interview.

A large portion of helicopter noise in the city actually comes from flights originating from New Jersey, according to the EDC. In 2021, 51 percent of the calls to New York’s 311 complaint hotline about helicopters were about New Jersey aircraft. Tourist flights originating in New York are restricted to the lower Manhattan heliport and banned from flying over land, typically going over the New York Harbor and Hudson River. This is not the case for flights that start at New Jersey heliports, however, which hover over landmarks in Manhattan and loop around Central Park.

New York City and the state don’t control the airspace above Manhattan, according to Saker Aviation, which operates the lower Manhattan heliport. The area is federal airspace, and therefore regulations on the routes of New Jersey helicopters flying above the city must be made by the Federal Aviation Agency.

Advocates also believe the pandemic has significantly worsened the effects of helicopter noise pollution. “The issue has become substantially worse in recent years,” said Lara Birnback, executive director of the Brooklyn Heights Association, which has been fighting this issue for more than a decade. “More people are working from home and aren’t necessarily being sealed in an office building in Midtown, so they’re observing it more.”

Commuter flights, which primarily take off from the West 30th and East 34 heliports, often fly over the Brooklyn Botanical Gardens and central Brooklyn, increasingly so in the summer months. “There is definitely a direct relationship between the kinds of beautiful days that New Yorkers themselves would like to enjoy, and the imposition of the very few who are paying for flights that are really incessant and disturbing to those of us here on the ground,” Birnback added.

Convenient for the wealthy, disturbing for the rest of the city

Noise pollution is not the only disturbance caused by helicopters. Stop the Chop and other activists argue the aircraft bring down real estate values, are targets for terrorism, and have negative impacts on the environment. Certain models of tourist helicopters, for example, produce more than 40 times more emissions than a car. And the two city heliports burn through 50,000 gallons of fuel each month on non-essential helicopter travel, according to New York City Council member Lincoln Restler, who introduced last week’s legislation. Restler added that New York sees around 4,000 of these trips monthly. “All so that people can have a nice view or get from point A to point B faster than anyone else,” he said. “Our climate future depends on us getting out of our personal vehicles, and sure as hell getting out of our helicopters.”

Getting rid of non-essential choppers, however, could also have a major impact on essential helicopters used by police, news organizations and for medical purposes. “These types of things need to be discussed with compromise at a table and not through legislation,” said Jeffery Smith, vice president of operations for the Eastern Region Helicopter Council, which lobbies for the helicopter industry.

At the lower Manhattan heliport, 95 percent of flights are considered non-essential, while a very small number of essential helicopters operate from the other two heliports. Without non-essential flights, Smith estimated that there would only be two or three flights operating a day, not enough to sustain the operation of the heliports. Losing the significant revenue of tourist and commuter flights would dry up funding for the heliports and put the operation of these necessary helicopter flights at risk, according to Smith.

The heliports also provide jobs for around 150 pilots, 80 mechanics, and other employees of the tourist companies. “Banning non-essential helicopters out of the heliports would put the helicopters out of business and lose a lot of good-paying jobs,” Smith said. “I also think it’s a terrible signal to tell the business community of Manhattan that they will not be able to use that transportation mode.”

And helicopter riders are not quite willing to give up their means of transit. Frequent commuter Silver said that he’s “all for having a cleaner climate,” but is too busy to waste time driving to the Hamptons. Plus, he said the noise doesn’t bother him. He lives near the heliport in East Hampton and occasionally notices the helicopter noise on weekends. “It’s really not bad. Makes me feel like there’s people around.” 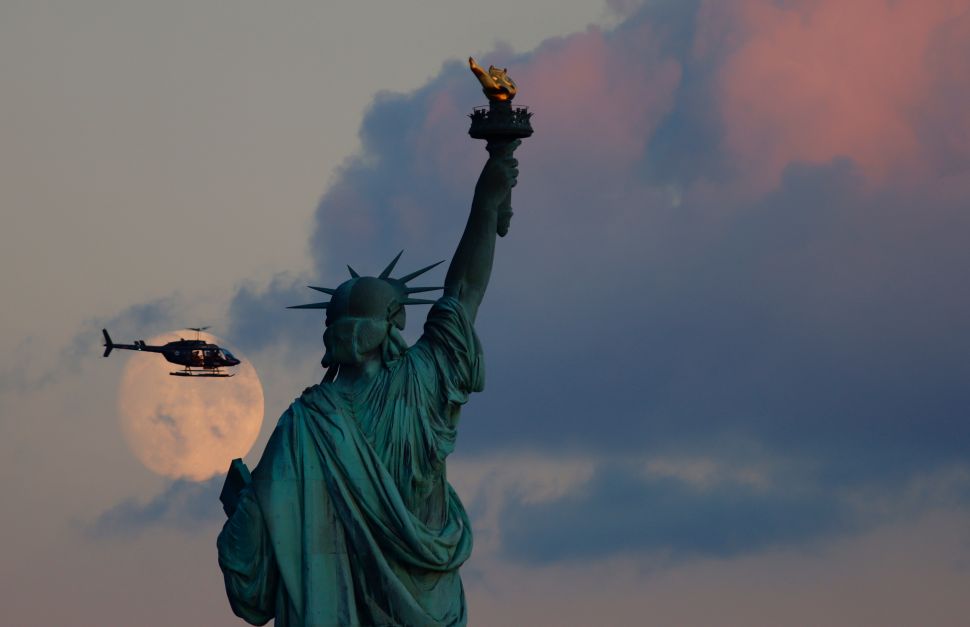