Last month on Twitter, Ashley Ray started imagining a post Roe v. Wade world. She envisioned sitting down with her future children, explaining to them that while abortion was illegal, they at least had “all of this ironic RBG- hip hop merch white women made” to keep them warm. In a set she performed in LA last year, Ashley remembers smoking weed and watching 90 Day Fiance while the 2020 election fell apart. She has long been skeptical of American exceptionalism, and she attributes that to her Blackness. “When you’re Black, you know our country is not ‘better than that,’” she tells Observer.

Our interview happens on the same Friday morning that Roe v. Wade is appealed, and the first part of it is dedicated to processing. We quickly agree that appealing to the sentimental side of those in power is not the way forward, albeit for different reasons. “When you grow up gay and you’re used to people dismissing your sexuality, your everything, you learn pretty quickly that you can’t play by their rules. Because their rules don’t even include you,” Ashley says. Her words evoke those of another legendary Black gay woman–Audre Lorde, who famously cautioned us against trying to dismantle the master’s house with his tools. Ashley’s very definition of queerness, also evocative of generations past, is grounded in resistance: “To me, to be queer is to be opposing to the mainstream and to the dominant culture.”

It is also grounded in being Black. “I think when it comes to blackness and queerness, there’s this frustrating idea people have that gay means white.” She cites Dave Chappelle as a comic who perpetuates this stereotype. Chappelle’s jokes often pit Black and queer people against each other, leaving no room for the Black queer populations who not only exist but also have historically led the forefront of queer movements. “They cannot conceive of the fact that really, queer culture is Blackness. The dominant gayness is Black people, is led by Black people. We were at Stonewall. A Black trans woman threw the first brick. It’s us.” She continues: “My blackness is my queerness.”

At this point in our conversation, something nascent stirs–if not hope, then something like it. Ashley feels the need to focus on what she can do, and to resist the urge to doom scroll. She looks forward to linking up with people that weekend, to protest or to celebrate. She knows that she will find power in her community, and of course, in comedy. “I’m a comedian and a writer so I also have this thing where I’m like ok, I have to find a way to laugh, what is the joke.”

Twitter jokes about the Supreme Court decision have already gone viral. A flock of instagram trolls, some of which Twitter has collected in the comments of this tweet, have popped up to advertise abortions in the same glitzy way that acryclic sets and eyebrow extensions are often promoted on the site. One Instagram story sells a “risky abortion” package plan that comes with a “roach blunt” and a “30% chance of dying.” The background of said story is a gleaming, cotton candy pink.

Ashley’s comedy has always been a form of resistance, employing a trademark mix of snide commentary, witty reflection on the mundane, and self-deprecating charm. In the same set performed in LA last year, she gauges privilege as the amount of time you can spend masturbating in a McDonald’s without being caught. She jokes about her roommate, who is the type of white woman who says things like, “I was not radicalized until Elizabeth Warren,” and leaves the front door ajar. Ashley’s politically conscious humor is what has earned her a reputation on Twitter, and what led to her suspension on the same platform in 2020–on that fateful day, replacing her screen name with Donald Trump’s, she announced that she won “the erection.”

One source for Ashley’s material is her polyamory, which she has become somewhat known for. She has spoken about her experience on multiple podcasts, and two years ago, she published an article in The Guardian about being polyamorous during the pandemic. She finds that of all her identities, being polyamorous is the one that gives people the most trouble. “Even my own mom can accept that I am queer and will date whoever but with the polyamory thing she’s just like, I don’t understand how you went on a date with someone yesterday and you’re going on another date with someone today. I don’t want to hear about it. That is where she draws the line.”

Ashley was never one to play by the rules, and her polyamory has been a full decade in the making. Far from a trend, it has become a veritable lifestyle. “I can’t pinpoint the exact moment I was like, monogamy is a lie, because I feel like I was always like that doesn’t make sense.” A combination of her natural rebelliousness and a campus visit by Tristan Taormino, the author of Opening Up, kick-started her adventures in polyamory. Soon after choosing polyamory in her senior year of college, she broke up with her then-boyfriend (who she had almost, in an uncharacteristic twist, married), and drove 13 hours from Massachusetts to Chicago to start a new life. The rest was history.

Over the course of our conversation, stereotypes about polyamory–some of which I have been guilty of believing–started to unravel. And so, for the record: no, Ashley is not just trying to fuck. She loves being in love, sometimes with multiple people at the same time. (Right now, she has four regular partners.) She is not entirely driven by her own needs, at the cost of society– as discussed in her piece for The Guardian, she did not date for almost two years during the pandemic. While she loves being alone, she has a long term vision of community, and of being loved well into her old age–but by a group of people instead of one. “There’s so many days when I think, God I’m so blessed to love all my partners in so many different ways and have love in my life in so many different ways, that looks like so many different things.”

While there are no hard and fast rules to Ashley’s polyamory–we joke about polyamorous people who have rejected the rules of monogamy to instead follow rules they put together in a google doc–there are some boundaries that Ashley employs as she navigates the dating world. Perhaps most obviously, she does not date people who are not at the very least open to polyamory. It would feel disingenuous to date individuals who have their hearts set on monogamy in the long term. She has learned to spot red flags like possessiveness and jealousy, or couples looking to use her for the benefits of their own relationship.

When I ask if she has advice for people considering polyamory, she says: “Figure out what you want. Sit down and ask yourself, what do I want my relationships to look like, what am I trying to get out of these relationships. And if it’s, oh I just want to fuck a bunch of people, maybe that’s not really polyamory, maybe you just wanna fuck around.” A lot of the stigma surrounding polyamory can be traced back to those who use polyamory as a way to dress up the concept of sleeping around, or to fulfill certain kinks or personal desires. In the worst case scenario, white people can use polyamory to perpetuate racism.

Ashley has learned the hard way that dating white people, as a Black polyamorous person, is often really harmful. She has been labeled as a couple’s “favorite sex toy” to her face, and being compared to an inanimate object was a turningpoint of sorts. In a separate instance, she found out that a white guy she was seeing was in an open relationship because of his fetish for Black women. He was allowed to date outside of his relationship–as long as it was Black women. “It was this weird thing for his partner where it was like, as long as I’m the only white woman he’s dating, I’m on a pedestal and I’m the one that matters.” After years of being fetishized or seen as a unicorn, Ashley made the conscious decision to stop dating white people–with a few exceptions, decided on at her own discretion–around 2018.

On the flip side of being fetishized by white polyamorous people is being dismissed by the Black community. When Ashley says that she is polyamorous in Black spaces, she is often met with skepticism. People assume that she is insecure, or just hasn’t found the right person yet. She also finds that in these spaces, polyamory is often considered “just another way to cheat.” Part of the difficulty here is the fact that polyamory, like queerness, is associated with whiteness, making a Black polyamorous person more easily dismissable. Another part involves deeply rooted fears in the Black community, some of which have evolved as protective mechanisms, although they can have negative effects in practice.

“Being poly goes against a lot of the stereotypes Black women are taught to kind of fear. We are supposed to fear being seen as the hyperzexualized Jezebel, and when you’re a Black poly woman, that stereotype is automatically thrown on you. People are immediately gonna be like, she’s a slut, she’s for the streets, she just likes to sleep around.” Ashley acknowledges that Black women often feel pressure, in an attempt to combat the Black Jezebel stereotype, to be proper with regards to their sexuality, and to play by respectability politics. In the same vein, Black men often feel pressure to assert their manhood in a way that may make it harder for them to be ok with sharing a partner.

For Ashley, the perks of polyamory continue to outweigh the negatives dramatically. Forging her own way as a Black solo polyamorous woman is intensely rewarding despite the complicated and sometimes painful realities of being fetishised, misunderstood or outright dismissed. Decentering love and romance lowers the emotional stakes when relationships end. Rejecting the notion of settling down with someone and having their kids makes irrelevant the notion of the “biological clock.” It strikes me during our conversation that being polyamorous might make it easier to say goodbye, and Ashley agrees. “I’ve learned a lot in just being able to appreciate a relationship for what it was, to let it go, to walk away. To not have regrets.”

There is also an element of reclaiming here. As bell hooks points out in her essay Black Women Intellectuals, Black women are too often robbed of the freedom to prioritize themselves and their work. Ashley finds that polyamory allows her more time to do what she wants, and, ironically, more time to simply be alone. One way to interpret her success–as a comic, a cultural critic, a podcast host (her podcast TV, I Say w/ Ashley Ray’s second season debuts on Earwolf July 27), a TV writer, etc–is within this framework. When I ask Ashley what her ideal polyamorous utopia looks like, she responds with a laugh: “Honestly I guess it looks like what I’m doing now.” 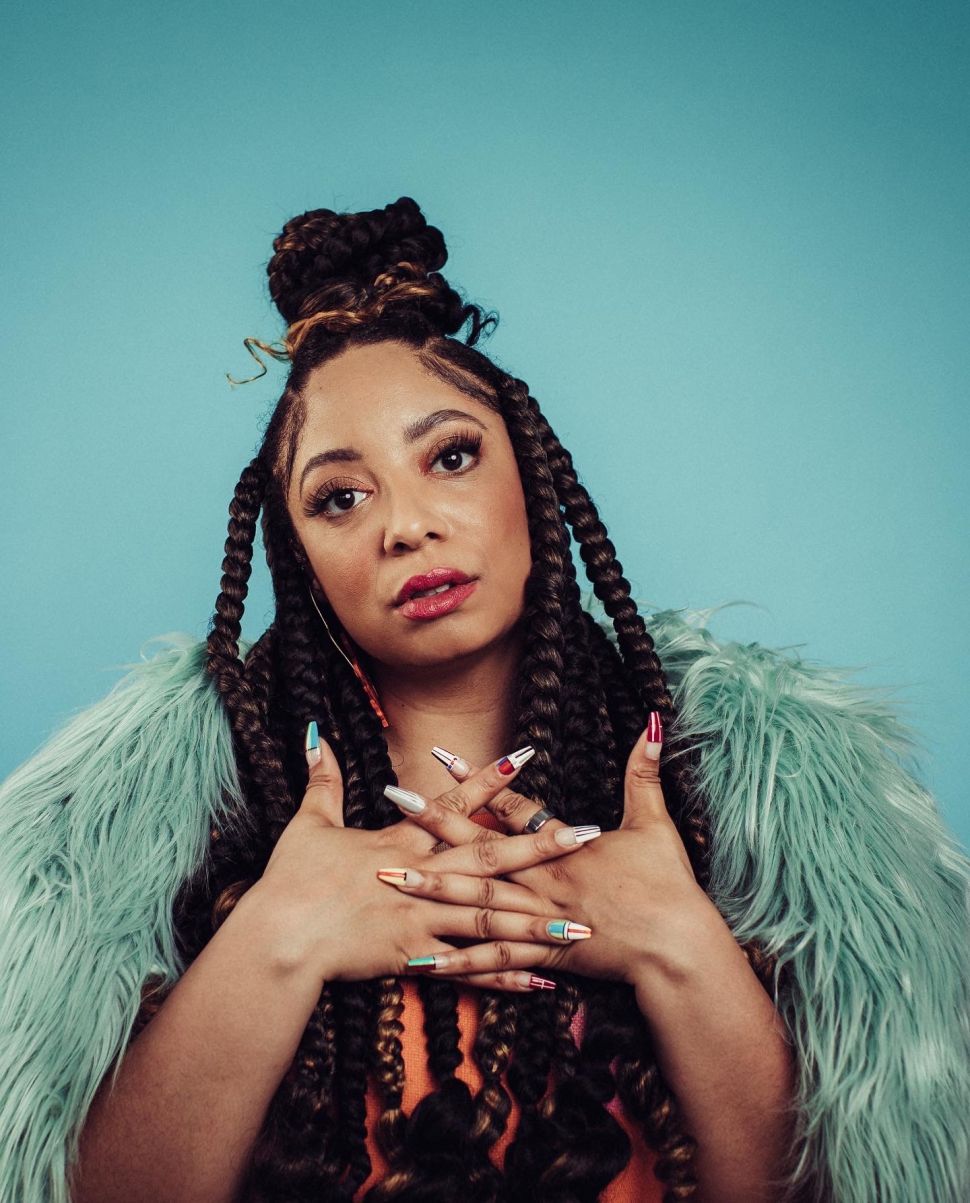