Guests at the upstate dinner party didn’t read the invitation, not fully. There was an email sent in advance by the elderly host, Morkan (Marylouise Burke), with an attachment that sounded comically lengthy and complicated, involving a keynote speech and group singalongs as well as research on the Feast of Epiphany. A nagging air of mystery hangs over the festive event that no amount of booze or smart conversation will dispel.

We, the audience at Brian Watkins’ Epiphany, also didn’t get the attachment which would have explained that his theatrical tone-poem is directly inspired by James Joyce’s novella “The Dead.” Borrowing a few Joyce character names and traits and following the story’s descent from lightly satiric holiday jubilation into morbid introspection, both the present drama and its source resolve as somber reflections on existence: how the dead inhabit the living, how the living rarely live.

Such grave matters come late in the piece, which takes up a lot (perhaps too much) of its intermission-free two-hour bulk with comic froth generated by an excellent ensemble. Guests ascend the stairs in a stately but declining manse outside the city, shaking the snow off their clothes but not the frost from their souls. There’s the boozy math teacher, Freddy (C.J. Wilson); high-strung pianist Kelly (Heather Burns) and her gregarious lawyer husband, Charlie (Francois Battiste); cerebral psychiatrist Sam (Omar Metwally) and his partner, a marketing flack named Taylor (David Ryan Smith); Morkan’s wise old friend called Ames (Jonathan Hadary); and the final guest, the mysterious partner (Carmen Zilles) of a more elusive absent guest, Morkan’s literary nephew Gabriel Conroy. Helping Morkan with cooking and table-setting is the young, strongly principled Loren (Colby Minifie).

This is such a dream cast of stage pros—a joy to watch separately and as a seamless ensemble in a comedy of manners—I forgot to be irritated that the play doesn’t hinge on any of them. Each rattles off reams of banter and cross-talk, enacting complicated blocking expertly orchestrated by director Tyne Rafaeli, but in the end, I’m not sure their presence affects the outcome that Watkins pre-ordained. They show up, interact awkwardly, get drunk, become confused and sad, and eventually leave. Late in the night, Morkan drops a bomb on the group, a revelation about her missing sister. The reveal only underscores the randomness of the gathering.

Playwrights write for all different reasons: some have concocted a plot that’s too good to waste; others fancy they have a new twist on an old social injustice; most simply want to punish their parents in public. A small minority, a brave few, do it to bat a big idea around for a couple of hours. Is death the end? What is true love? Is reality shared? In such cases, the stage serves not as a story and character generator, but as a philosophical obstacle course, a poetic zone where language, gesture and intellect power the drama. Call it symbolist theater, absurdist theater, the New Weird, but it’s the sort of world that Epiphany is coming from. It’s all there in the title: Watkins is prodding Morkan (primarily) to a startling personal realization.

But is it so startling? From the first glimpse of John Lee Beatty’s customarily lavish set, a pre-war parlor with snow falling on bare trees visible through transparent walls, there’s a heavy vibe of old-timey mortality in the air. The building itself seems on the verge of giving up the ghost. Marylouise Burke, an actor who always seems like a teenager trapped in the body of a senior citizen (she did star in the 2001 play version of Kimberly Akimbo), is just as youthful, but plays up her character’s frailty and fearfulness. If I were to tell you that Epiphany is basically about death, it wouldn’t qualify as a spoiler.

Even if it somewhat evaporates from the mind, I found the production to be transfixing at the moment. Montana Levi Blanco’s character-specific costumes are gorgeous and witty; Isabella Byrd conjures deep magic with abundant candles and restrained lights; Daniel Kluger’s spooky sound design makes hidden spaces resonate. The cast, as mentioned, is impeccable. And Watkins’ writing is technically impressive—the equivalent of juggling eight balls while keeping the beat on bass drum pedal and improvising on harmonica.

Once you accept that Epiphany is a mix of Joycean DNA, Buñuelian atmospherics, and a heap of New Yorker-level cocktail chatter, you can relax and enjoy it. There will be no grand, head-smacking revelation, just a small but piercing insight: “We’re not meant to be alone.” Something your sweet, dotty grandmother might forward you as an attachment you never bother to open. 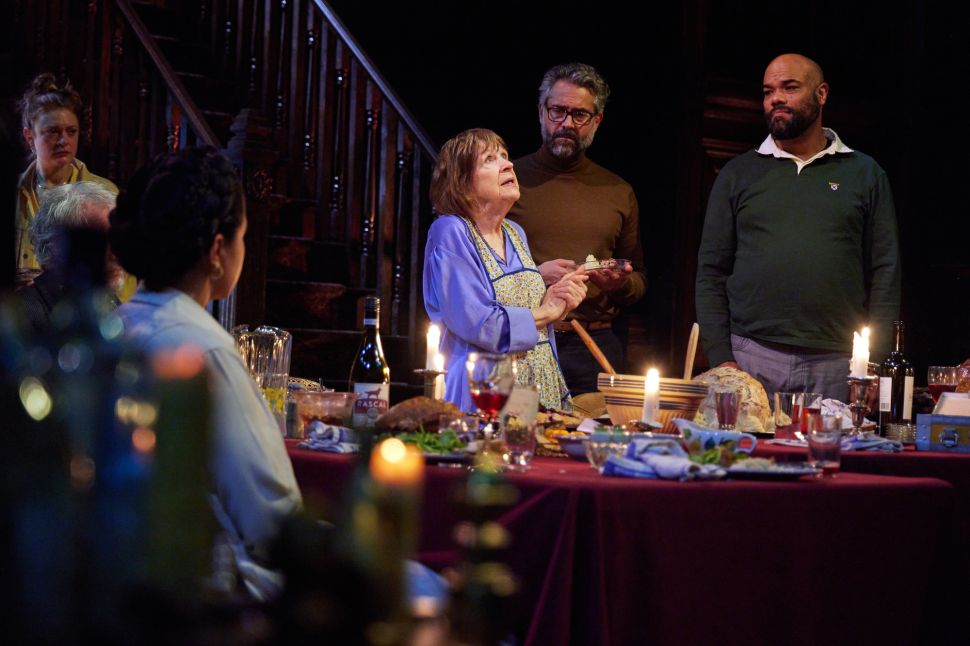