The New Yorker’s Hilton Als questions definitions of folk and outsider art in an exhibition of works by Antiguan artist and polymath, Frank Walter

There is something about landscape painting that lends itself to colonial kitsch. So tied are our systems of control to land ownership that even the most rugged representations of nature are sewn through with a rentier mentality. In Caspar David Friedrich’s 1818 painting, Wanderer Above the Sea of Fog, the male perspective dominates the misty mountain scene. 19th century landscape artists were plumbing the wilderness and planting their flags in the harshest terrains: environs soon to be strip mined, bulldozed, or transformed into commercial tourist destinations. So much for the Romantic sublime…

In the vast majority of western landscape paintings, the viewer looks at nature as an object to be consumed. Yet, there is another kind of landscape that has traveled alongside this dominant strain. One in which you look at nature but nature also looks at you.

In 2017, Hilton Als, theater critic for The New Yorker, visited the West Indian Pavilion at the Venice Biennale, and first saw works by the Antiguan artist, Frank Walter. The exhibition was in a basement. It was hot and the only worker in the gallery was Barbara Paca, an art historian who discovered Walter in Antigua, and authored the only existing book on the artist. Als found Walter’s work immediately arresting.

“He wasn’t imposing the human form on the landscape,” Als told Observer. “He was trying to find a way to not only show us what he had seen, but also, he was very interested in how does the human, how does the vision or visionary equal the landscape?”

Als, whose family comes from Barbados, was immediately struck by Walter’s multiplicity of vision. “I left the exhibition spiritually taken as much as I was visually,” he told Observer. At the exhibition’s opening, Als spoke on the lack of sentimentality and softness in Walter’s landscapes. Walter, he said, wants nature to be a part of us.

After the Biennale, Als met up with the English dealer from David Zwirner gallery and told him and everyone he knew about what he had seen in the West Indian Pavilion. This experience led to the Frank Walter exhibit currently on display at David Zwirner’s uptown gallery in New York, curated by Als.

The selections of Walter’s work chosen for this exhibit are mainly landscapes, often with huge, overwhelming skies and muted colors. Forest and rock formations are pressed claustrophobically against the foreground, obscuring watery horizons from view. In one work, untitled but known as View of Sea Through Trees, ominous foliage leans across an inlet streaming in from the sea. The ’s surface froths with movement. In another work, also untitled by the artist, known as Craggy Mountains with Meandering White Path, spindly green and gold trees are poised between black cliffs. The white path snaking around the trees is like a trailway of light, leading to the dawn sky that lifts up the horizon. Both landscapes are viewed from the point of view of a walker about to see something spectacular. But that Caribbean picture postcard view is covered over and dominated by parallel natural forms. Nature, the works declare, doesn’t care that you want to see the unobstructed panorama.  It has other work to do.

Walter’s landscapes are looming, weird, and off-kilter. They are nature viewed from the point of view of a bird or an insect or of a person who has lost their way. Walter, who received no acclaim for his work when alive, and who died in 2009, is typically shown among outsider artists when he is exhibited. Walter was solitary and lived in his own world. Like outsider artist Henry Darger—the hospital janitor whose 15,000-page novel, The Story of the Vivian Girls, is filled with astonishing watercolors of children being tortured and saved in an epic fantasy—Walter also struggled with mental health and was institutionalized. He experienced hallucinations throughout his life. Walter’s own literary work, an autobiography, runs to 8,000 (hand-typed) pages.

However, unlike Darger, Walter was highly educated and had some success in a professional career. He was the first Black man to work as a manager in the Antiguan Sugar Syndicate. He lived and traveled extensively in Europe. He cultivated farmland and ran for political office. Where Darger was an orphan, Walter had a loving family.

Als rejects the pigeonholing of Walter as an outsider or folk artist. “I wanted people to take his work as a painter to be the work of a painter, and not this odd figure who was living in isolation,” Als told Observer. He edited the exhibit at Zwirner to just be about Walter’s painting and visual life. He pushed aside the autobiographical and foregrounded Walter’s hand as an artist.

Als’ desire to have the art world see Walter as a great artist by stepping around his background and struggles with mental health is understandable. Walter being as tremendous an artist as he was, being as educated and cultivated as he was, and being a Black man from Antigua, raises questions about outsider art and why there is an inside and an outside to begin with.

One of the most striking works currently on display at Zwirner is Right Side of the Milky Way (artist’s own title)—a surreal horseshoe shaped cosmic landscape depicting the Milky Way bursting out of the sun. Painted on a gnawed slab of wood, its contours are reminiscent of ancient Anglo-Saxon metalwork. Having this work on display at Zwirner’s swank uptown gallery is gratifying, and at the same time a little bit sad. In the harsh glare of the gallery lights, on the blindingly white walls, Walter’s small, brilliant works are literally hard to see.

That one must strip an artist like Walter of his autobiography to have him taken seriously by the art world is heartbreaking. This notion also strikes me as coming from the standards of a different era. It bears the imprint of Formalism at midcentury: when art was encouraged to abstract itself from context, to remove itself from world affairs and political movements. That is clearly not Als’ intention here. Yet, I couldn’t help but think while walking the gallery, how much more impactful these works would be if shown alongside the fullness of who Walter was. Walter as a landscape artist refused to show nature naked on an examination table. Not for him the clean panoramic beachscape. Nature instead was a thing of many conflicting and contradictory patterns. Perhaps in exhibits to come, curators can mirror this richness in the way his work is displayed. 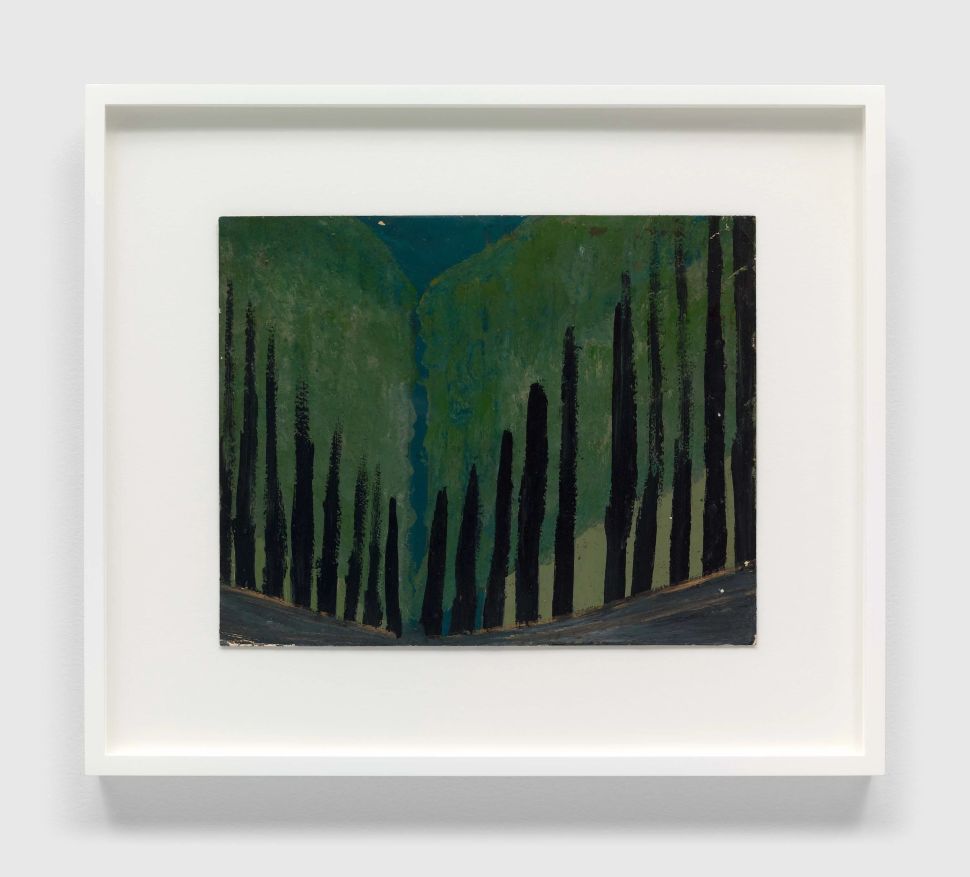