Critics should review the show they saw, not the one they wanted to see, but one’s eyes keep wandering to the large, Andrew Scott–shaped hole at the center of Robert Icke’s Hamlet. A slick and thoughtful, if indulgent, reading of Shakespeare’s tragedy (running a punitive 3 hours and 40 minutes), the surveillance-state staging offers little you haven’t seen across a lifetime viewing Hamlets—yet it withholds the one thing that might’ve made it special: a commanding turn by the irresistible Scott.

He headlined this cool, metallic account in 2019, first at London’s Almeida Theatre, then on the West End, where Scott’s yearning, raw, and inward take on the bipolar Dane was reportedly revelatory. Those who have admired Scott from afar as the charmingly raffish priest on Fleabag, or Garry Essendine in an NT Live broadcast of Present Laughter would have lapped him up for nigh four hours as the beleaguered, existential prince.

Instead we sit through a sensitive but finally underwhelming turn by young British TV star Alex Lawther (The End of the F***ing World, Black Mirror), a pouty waif swallowed up by Icke’s brutalist vision and the airplane-hangar dynamics of Park Avenue Armory. Lawther speaks the speech in dutiful, classically trained fashion. Grief weighs down his schoolboy limbs. He exudes the authority of the boss’s petulant son. He moves with a doe-like delicacy that suggests poet and scholar more than soldier—Little Lord Fauntleroy rather than father avenger and danger to the Danish court. When Hamlet contemplates an upcoming duel and brags, “since [Laertes] went to France, I have been in continual practice,” it ought not elicit a spontaneous laugh from the audience. This dewy nipper would lose at thumb wrestling with a determined hamster.

Absent a dynamic and aggressive center, Icke’s Hamlet must keep our attention with its various gimmicks and interpretations, which are admirable in their A-student aura of confidence, if none of them particularly fresh. Closed-circuit cameras to show the Ghost stalking Elsinore’s shadowy halls? Check. Bob Dylan tunes woven throughout to suggest… world-weary melancholy? Fine. King Hamlet’s funeral, the Hamlet-Laertes fight and other business captured on CNN-style broadcast to point out we live in a mediated world? Congrats. We are long past a time when sliding glass doors, sectional furniture and live video feeds will startle the seasoned ticket holder. (The sleek, chilly modern décor is by designer Hildegard Bechtler.)

For the past decade in London, 35-year-old Icke has been racking up superlatives as a wunderkind translator-director who sandblasts classic plays to a chic, modern sheen. He has essentially re-written Ibsen, Schiller and Schnitzler, not to mention condensed the Oresteia into a three-hour modern-dress version that reads like Harold Pinter having a go at the Greeks. (The Oresteia runs in rep with Hamlet next month.) There’s a briskness and immediacy to his stripping-down of canonical texts, if also a superficial contrarian approach that borders on glibness. Neither “What if Claudius…weren’t such a bad guy” or “what if Hamlet were really, really grieving” is much of a conceptual prompt.

Still, Icke’s insistence that his actors speak with an un-histrionic, conversational intimacy blows some dust off the overfamiliar lines and soliloquies. This is a Hamlet that rewards the ear, and patient clarity is part of what sustains engagement through an exhausting run time. I was touched by the portrayal of Polonius, Ophelia, and Laertes as a relatively happy family that Hamlet spies on sadly, enviously. But Icke’s attempt to muddy Claudius’ guilt goes nowhere and staging the fratricide’s “O my offense is rank” confession directly to a gun-waving Hamlet makes no sense given the key plot point: Hamlet doesn’t murder Claudius then and there because it would send his soul to Heaven. I did admire some dreamy business at the end, as Hamlet’s victims reunite at that big Bob Dylan dance party up in the sky.

As an agent of revenge, Hamlet has always been queasy-making. Paranoid, misogynist, puritanical, narcissistic, rage-prone, he’d make a terrible king, hurling plates of ketchup against the wall, no doubt. But when Lawther totes a handgun up and down the hallways, that’s when the imagery cuts a little too close to our current dystopia, where 18-year-old sociopaths buy firearms and cause unfathomable tragedies. The resonance comes across as incidental, Hamlet as incel edgelord only vaguely implied. (Absence of digital devices is one modern flourish we’re spared; no Polonius reading “Doubt thou the stars are fire” on his iPad.)

It’s a strong overcall cast, with Angus Wright’s Claudius in fine voice, a creamy rogue; Peter Wight’s old Polonius makes a surprisingly loveable figure; and the vibrant Jennifer Ehle brings nuance and passion to Gertrude, a sexual as well as political creature. Kirsty Rider’s pretty, insecure Ophelia does what it can with the perennially passive victim; if Icke can’t give the young woman agency, he finds vitality in her self-abuse—beating her chest and face and later sharing “herbs” with the court: a series of cuts on her arms and legs. Only in Lyndsey Turner’s 2015 Hamlet with Benedict Cumberbatch did I feel a director treated her like a full, dimensional character. To me, Ophelia’s is the true tragedy: exploited by father, bullied by lover-prince, driven mad by grief, drowned with no lifeguard about, her defenseless corpse yanked between brother and psychotic ex while fresh in the grave. In comparison, Hamlet just seems a whiny, entitled brat. Perhaps Andrew Scott would have changed my mind. 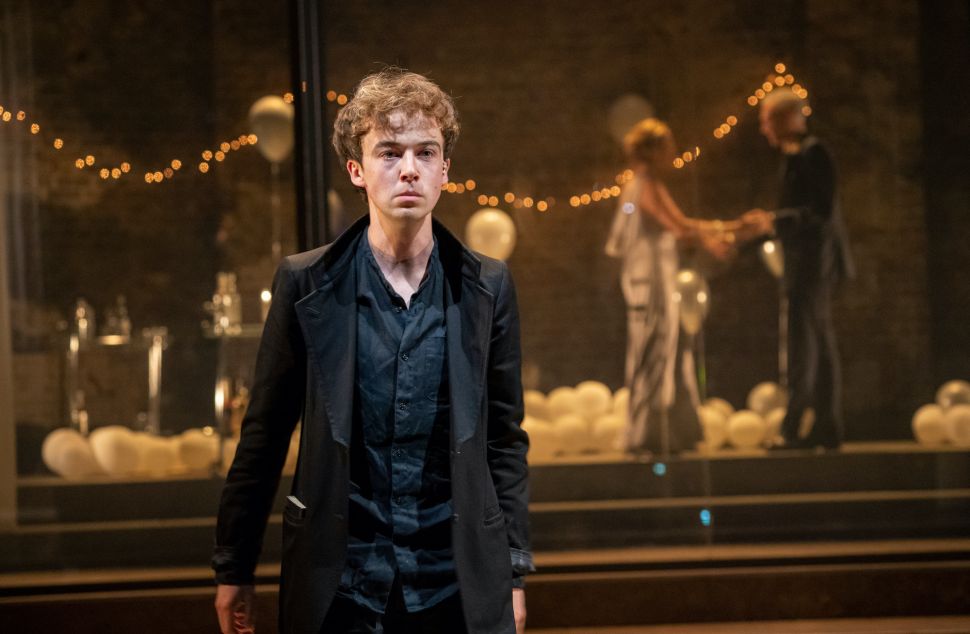