There’s a rich and illustrious tradition of American musicals set entirely in New Hampshire, the Granite State, New England’s flyover zone, where “Live Free or Die” means “choose Door #2.” You have The Shaggs: Philosophy of the World, about history’s crappiest girl band; also Atlantic Theater Company’s The Bedwetter, based on comedian Sarah Silverman’s 2010 memoir. And then there’s…I guess that’s it. Only two. Hey: It’s one more than friggin’ Oklahoma.

As a person who escaped—I mean, grew up in—New Hampshire (where humanitarians such as Ghislaine Maxwell and Bernard Goetz sought sanctuary and J.D. Salinger holed up to drink his own urine), I’m intrigued by its success stories. It baffles me that three major comedy talents emerged from the land of maple syrup and soul death: Adam Sandler, Seth Meyers, and Silverman. Maybe it’s a coping mechanism, being Jewish in a place where the rivers run white with mayonnaise. In The Bedwetter, we do get a sense of Silverman’s comic roots in this portrait of the artist as a tween with poor bladder control.

The show features a zippy book by Silverman and Joshua Harmon (Bad Jews, Prayer for the French Republic), and tunes by the late Adam Schlesinger (Cry-Baby, Fountains of Wayne), featuring lyrics by Schlesinger and Silverman. Due to the songwriter’s untimely death in 2020 from Covid, musical-theater wizard David Yazbek (Tootsie) came on board to tweak music, lyrics, and song order. The final score, which leans heavily on parody, period and pastiche, isn’t terribly original or memorable (and much less satisfying than the Atlantic’s previous musical, Kimberly Akimbo), but it serves as an enthusiastic delivery system for droll, witty lyrics. The book does a good job of balancing vulgar laughs with sentiment for the bittersweet family drama that drives the piece.

For young Sarah (Zoe Glick), youngest child of divorced parents in Bedford, NH circa 1980, life is a constant struggle between nature and nurture. On the biological side, she has a tendency for clinical depression inherited from her mother, Beth Ann (Caissie Levy), and she pees her bed at night, which her father, Donald (Darren Goldstein), also did as a kid. In terms of nurture, Sarah collects an endless supply of dirty jokes from earthy, wisecracking Donald which she repeats to horrified teachers and titillated classmates. Beth Ann, who spends all day in bed watching classic movies, contributes to Sarah’s growing interest in showbiz; finally, she volunteers for a school talent contest doing stand-up. A potty-mouthed star is born.

As played with zesty resilience and endless pluck by the talented 14-year-old Glick, Sarah is repressing a lot of feelings. The more conventionally feminine girls mock her Mork-from-Ork couture and pageboy haircut; her Jewishness and filthy jokes are a source of fascinated disgust to them. At first, it seems nothing can pierce Sarah’s jokey deflections and sunny optimism. But the night she is invited to a sleepover to watch Miss New Hampshire (Ashley Blanchet) compete in the Miss America Pageant, Sarah goes into panic mode: She’s terrified she’ll wet her sleeping bag. That night, indeed, golden streams flow.

When her friends catch Sarah’s grandma (Bebe Neuwirth) bringing in diapers from shopping, Sarah is exposed and humiliated. Depression follows, and therapy, then Xanax. The comic treasure Rick Crom plays a hypnotist and a pill-pushing psychiatrist in a couple of hilarious numbers about ham-fisted healing. Donald blames near-bedridden Beth Ann, while he himself commits adultery with multiple local wives. Sarah’s older sister, Laura (Emily Zimmerman), is exasperated with her weirdo younger sibling, but she worries, too. In the family’s past there’s trauma around an infant boy who died in a crib collapse.

In its story of family secrets and inherited dysfunction, The Bedwetter bears a surprising similarity (thematically, not musically) to Jeanine Tesori and Lisa Kron’s Fun Home—mainly as its inverse. In the older musical, a father’s hidden homosexuality and emotional manipulations created toxic barriers between him and his family. In a very touching hospital scene after Nana lands in the hospital, Donald and Sarah talk as the father and daughter never can in Fun Home, admitting that life is scary, and that growing older (whether its ten or 50) is painful stuff. In the song “When I Was Nine,” Donald muses, “But now I find / As a middle-aged divorcee / There’s nothing that I can do or say / That would give you peace of mind.”

While there’s still deep animosity and recrimination between Sarah’s parents, they come to some peace. The Bedwetter, for all its wallowing in childhood shame and selfish, bitter adults, is a coming-of-age comedy. Sarah takes pills for her clinical depression, she falls in love with stand-up, and presumably achieves some control over the yellow stuff. Happy ending.

All in all, The Bedwetter is an amiable summer diversion, adeptly directed by Anne Kauffman and performed in a loose, affable style with an unimpeachable message of acceptance for everyone, warts and all. The cast is terrific, with likable character actors like Goldstein blending nicely with world-class belters such as Levy (Neuwirth is underused as the cocktail-quaffing grannie). Who knows if this small and quirky show will get to Broadway? I’m just glad it got out of New Hampshire. 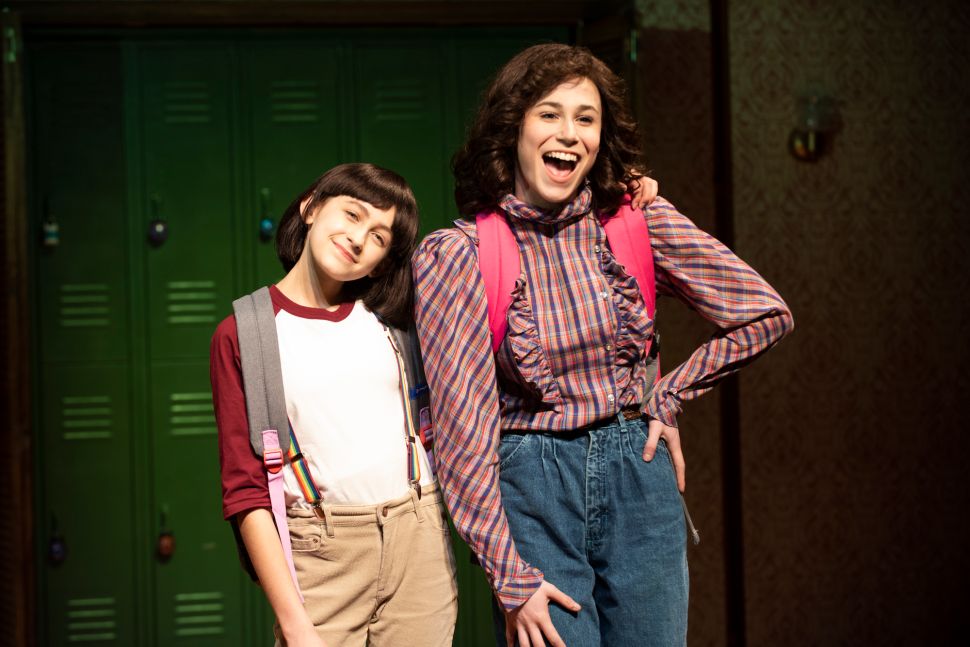