The owners of a collection of paintings by Jean-Michel Basquiat valued at $100 million are under investigation by the FBI, which suspects the works are forgeries. Court records and an affidavit filed by the FBI to procure a search warrant indicate the owners have previously been involved with forged works of Jackson Pollack.

On June 24, the 25-piece Basquiat collection was seized by the FBI from the Orlando Museum of Art, where they were in an exhibit called Heroes & Monsters: Jean-Michel Basquiat. On June 28, Aaron De Groft, director of the Orlando museum, was fired. “The Orlando Museum of Art’s Board of Trustees is extremely concerned about several issues with regard to the Heroes & Monsters exhibition,” said Cynthia Brumback,  chair of the museum’s board, in a statement to the Orlando Sentinel.

The FBI has been investigating this particular collection since 2013. In the affidavit, the owners are identified only by their initials, but the New York Times reported the co-owners are retired salesman Leo Mangan, art dealer William Force and lawyer Pierce O’Donnell. A fourth owner, whose identity has not been confirmed, is referred to in the affidavit as “T.B.”

One of the owners was interviewed by the FBI in 2014 over alleged works by Pollock, according to the affidavit. He purchased them from a seller who later spent five years in prison for wire fraud in connection to inauthentic Pollock paintings.

According to court records, Mangan and Force were also involved in a 2014 lawsuit, when gem dealer Anders Karlsson sued them after he allegedly purchased Pollock paintings that turned out to be fake. Meir Westreich, Karlsson’s lawyer, said the men are notorious. “It’s the same crew,” he said. “They’ve been doing this for years.”

Meanwhile, O’Donnell made headlines in 2016 when he represented himself regarding an unauthenticated Pollack painting he claimed to co-own.

Mangan’s attorney, Richard LiPuma, declined to comment while Force and O’Donnell have not responded to phone calls requesting comment.

Jean-Michel Basquiat was a graffiti-inspired painter who died in 1988 at the age of 27. In recent years, the value of his works have increased substantially. In May, a 1982 painting sold for $85 million, after it was sold for $57.3 million in 2016 and $4.5 million in 2004. Increased prices have led to a surge in forgeries, said Basquiat’s first art dealer Annina Nosei. “It’s because of the money. They heard the price.”

However, she added that it’s nearly impossible for Basquiat forgeries to succeed in today’s market. “All the paintings that he did are archived. So there are no new ones coming up.”

The internet has also made art fraud much more difficult, according to artist Alfredo Martinez, who served two years in prison for forging Basquiat paintings. “Because you can look things up easier and then follow the chain of custody,” he said. “Where was it all this time?”

The owners claim the Basquiat collection was originally created in 1982 and purchased by television screenwriter Thaddeus Mumford, who stored the works in a storage locker. The locker was supposedly sold in 2012 after Mumford failed to pay rental fees, and the 25 pieces ended up in the hands of Mangan, Force and O’Donnell.

However, in the affidavit Mumford, who died in 2018, said he never purchased any works by Basquiat or stored artwork in his locker. The document also stated that in 2012 Mumford refused to sign a notarized document stating that he bought the Basquiat paintings, and that one of the owners offered to make Mumford part owner of the collection if he signed an ownership declaration.

Another question involves a painting in the collection painted on FedEx cardboard. “Forensic information indicates that the cardboard on which one painting was made contains a typeface that was created in 1994, after Basquiat had passed, thereby calling into question the authenticity of at least one piece,” read the affidavit.

The document further discussed the unreliability of experts who authenticated the 25-piece collection. Jordana Moore Saggese, an art history professor at the University of Maryland, was confirmed by the New York Times as one of the experts mentioned in the affidavit. Saggese was paid around $60,000 to write an opinion about the collection’s authenticity and was told by O’Donnell that he would fund scholarships at her school after selling the artwork for millions.

Experts believe the collection is fake

When Saggese realized her report was being used for the Heroes & Monsters show, she requested museum director De Groft not use her name, writing “I am in no way authorized to authenticate unknown works by Jean-Michel Basquiat.”

“You want us to put out there you got $60 grand to write this? Ok then. Shut up. You took the money. Stop being holier than thou,” responded De Groft, according to the affidavit. “You are threatening the wrong people. Do your academic thing and stay in your lane.”

The FBI document also detailed conversations with Basquiat experts who believe “the works by Basquiat within the Mumford collection are not authentic.” One of the experts interviewed by the FBI was Nosei.

“It was very easy to see they were fake,” said Nosei. “They didn’t understand anything about art history. They only understand money.” 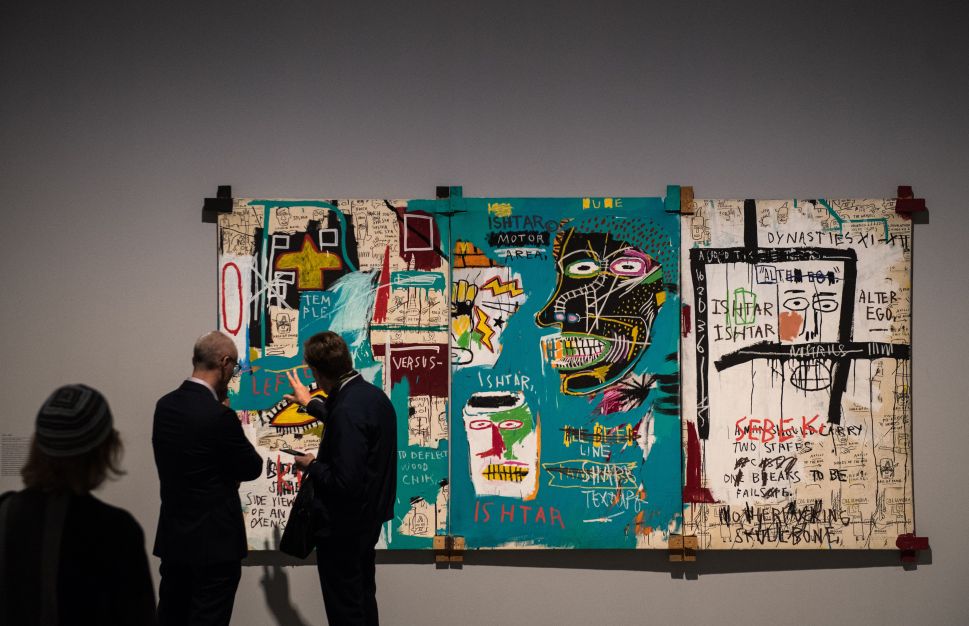