On July 27, Disney+ rolls out Light & Magic, a six-part docuseries detailing the groundbreaking special effects of Industrial Light & Magic. The idea is to celebrate the art of movie making — or special-effects blockbuster movie making — by telling the story of the troupe of scrappy tinkerers and visionaries who, starting in 1975, dreamed big and created bigger, netting some 40 Oscars and hundreds of other awards and nominations in the process. ILM was created by George Lucas for the the sole purpose of making the faraway galaxy of Star Wars look real and they came up host of visual effects and filmmaking tricks that were previously unthinkable. Gone were the wobbly sets and spaceships of the Flash Gordon days; a new era of sci-fi, fantasy, and action films that redefined the craft was upon us. Here are 10 classic examples of effects ILM has achieved over the decades.

Every studio had shuttered their effects departments when George Lucas bent the limits of visual imagination on his first entry in the Star Wars series. Working with future Oscar-winning effects artist John Dykstra, Lucas hired a team of young model makers and technicians who were literally making it up as they went. The nascent ILM bashed thousands of model kit pieces together to create the film’s unique spacecrafts, and built a computer-aided, motion-controlled camera system to simulate motion around still models instead of stringing them up on wobbly wires. The gamble paid off handsomely from the first shot of the film, where an Imperial Star Destroyer — all of 91 centimeters in real life — thunders past the camera for what seems like an eternity. The result was pure movie magic, and the birth of a new chapter of visual storytelling.

After getting Star Wars off the ground, Lucas turned his attention to a pulpy action hero he conceived named Indiana Jones, who’d come to life courtesy of star Harrison Ford and director Steven Spielberg in Raiders of the Lost Ark and three sequels (a fourth, not directed by Spielberg, hits theaters next year). The films were always trying to up the ante on wild visual gags, but none might be wilder than when the evil Nazis attempt to open the Ark of the Covenant and get their faces melted off by its power. At a 2022 screening of Raiders, Spielberg revealed that he superimposed the sheet of flame over the final exploding head to avoid an R rating. “I directed Saving Private Ryan; I love blood!” the director quipped.

Barry Levinson’s whimsical prequel film to the legendary detective stories is by no means a modern classic, but it’s very notable for the scene where a knight in a stained-glass window leaps from its frame and menaces a priest. This early landmark in computer effects became a coup for ILM’s “Graphics Group,” which would be spun off into its own company that year under a new name: Pixar.

ILM really did some of their best work in some of the least-regarded entries in their filmography. Willow, a Lucas-conceived, Ron Howard-directed fantasy epic that plays like if your stoned friend tried to retell Lord of the Rings from memory, nonetheless featured another innovation in digital technology: a detailed sequence that turns an enchantress into several different animals with the wave of a magic wand. (One of the project’s camera operators, John Knoll, had a productive 1988: he and his brother sold the license to Photoshop, a homebrew editing software they built in their free time, to Adobe that same year.)

Having innovated models and camera work for a solid decade, ILM offered their skills in the assistance of one of cinema’s most well-established effects: hand-drawn animation. The company was crucial in making Disney’s zany noir comedy about a cartoon hero working with a human detective to beat a murder rap look real — the ILM staff’s keen understanding of lighting, tricks to make toons interact with real objects and optical composites made this classic film look like nothing else before or since.

The beloved time-traveling trilogy crafted a unique blend of action, comedy, nostalgia and good ol’ science fiction, with plenty of model work in the sequels to make Doc Brown’s DeLorean fly. But ILM’s signature innovation for the series’ second film was a computer-aided camera system called VistaGlide, allowing multiple takes to be spliced together in perfect synchronization — and allowing three different Michael J. Foxes to have dinner with each other in 2015.

James Cameron didn’t need to go so hard for his sequel to the sci-fi/noir classic The Terminator. But a new decade, an even bigger star in Arnold Schwarzenegger and a positive experience working with ILM on 1989’s The Abyss (which featured a digital tentacle) convinced the director and the effects house to enhance Robert Patrick’s steely performance as the T-1000 with the most incredible digital effects to date. The liquid metal foe stretches its limbs, morphs into other identities and melts through prison bars like it’s nothing – and soon enough, those sort of eye-popping effects would be the norm.

Digital technology took an even greater leap forward when Steven Spielberg assembled a who’s who of effects icons to adapt Michael Crichton’s blockbuster novel about cloned prehistoric beasts wreaking havoc in a theme park. While Jurassic Park featured its share of full-size animatronic models, the plan was to use ILM’s “Go-Motion” models to show the dinosaurs when they moved. ILM supervisor Dennis Muren – who’d been with the company since they started – got a team of animators to test footage of moving dino skeletons and eventually full animals. Phil Tippett, who spearheaded the Go-Motion projects, quipped that he was “extinct” thanks to the Oscar-winning innovations – an exchange Spielberg included in the film.

In the post-Jurassic Park digital boom, filmmakers were looking for opportunities to incorporate entirely digital characters into their films. The problems were usually that they looked bad or that they were as ill-received as the Star Wars prequels’ Jar Jar Binks. ILM finally came close to nailing it with the second Pirates of the Caribbean film, in which Bill Nighy’s motion-capture performance transformed into the villainous seafarer Davy Jones, an effect that you’d be forgiven for thinking was impressive makeup.

For better or worse, ILM’s influence has made digital effects easier than ever to utilize, to the point where some creations just aren’t as impressive as they used to be (or, thanks to unreasonable deadlines, just don’t look good in the first place). On Disney’s Star Wars TV shows, ILM found a way to bring new life to productions with StageCraft, a new technology that projects ultra-high definition images onto huge LED monitors, immersing characters into fantastical locations better than a blue screen ever could. 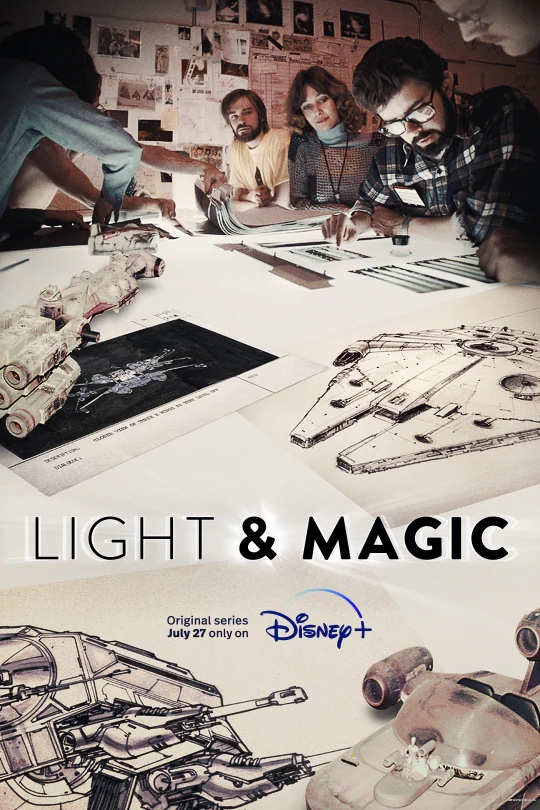