When Into the Woods premiered in 1987 on Broadway, a 42-foot vinyl boot and matching toe hung over the Martin Beck Theatre to greet theater-goers. The inflatable installation hasn’t been seen since 2002, but now Broadway producers are on a quest to get it back.

“The boots are legend on Broadway and certainly for New Yorkers who were here in the ’80s,” said Jordan Roth, producer of the iconic musical’s current revival at the St. James Theatre. “As soon as we knew we were doing this, the thought was ‘we gotta get the boots. Where are the boots?'”

Known as The Giant’s Leg, the vinyl boots were originally commissioned by Michael David, the producer for the play’s 1987 run. He thought the inflatable piece would help people visually locate the Martin Beck Theatre, now renamed the Al Hirschfeld Theatre, according to the New York Times.

“I remember a phone call from Michael David asking ‘can you produce this in an outrageously short time?'” Ann Slavit, the artist behind the boots told the Observer. Slavit and a team finished the work in six weeks at a studio in California, sometimes working through the night. She had previously created an inflatable pair of red shoes for the Brooklyn Academy of Music and some high-heeled legs for the Museum of Contemporary Crafts.

While The Giant’s Leg was her last leg piece, Slavit said memories of how women were shown in the media inspired her focus on the body part. “In the 1950s, the images I was surrounded by were essentially women portrayed as a great pair of legs,” said Slavit. And the Into the Woods boots felt logical to her, an ominous representation of the play’s giant who is never seen.

The mystery begins after the winter of 2002

The play closed in 1989 but the boots came out of storage for a 2002 revival, this time at the Broadhurst Theatre. After a company assigned to install them quit four weeks before opening night, Slavit called upon Chic Silber—a well-known stage hand and self-identified “circus show bum”—for help.

The task was no easy feat. The Broadhurst Theatre was shorter than the Martin Beck and scaffolding had to be built atop the roof in order for Silber and his crew to install the boots. And while the original installers of the boots had engineered a sophisticated base and attachment system on which to hang them, there was limited documentation on how to use it.

“I read it one way, Silber read it another. It became a bet,” said Aaron Waitz, Silber’s assistant of 30 years. The two wagered $100 on who read the document correctly, with the rest of the crew cheering them on. “Actually putting up the boot was secondary,” said Waitz.

After multiple 8-hour shifts the boots were finally mounted. Weighing over 500 pounds, the leg stuck out 18 feet in front of the building and was anchored to a window in order to stabilize the weight.

When it came time to take down the installation, the winter weather conditions made the process significantly more difficult. “The roof was wet, cold, slippery, icy. The whole boot was encased,” said Silber. “In order to get this frozen lump down we had to cut it apart.”

Silber recalls cutting the leg in half, either below the knee or from the back end of the thigh. After the piece deflated, the crew was finally able to remove it from the roof. “It was loaded into a trailer or a truck and that was the last I saw of it,” said Silber, who believes the boots were likely discarded.

Meanwhile, Waitz said the boots were cut into much smaller pieces, around a dozen in total. “We got orders, and I don’t know if it was the producers or somebody with the company, but somewhere the decision was made that it wasn’t going to be necessary to preserve this for future use.” He remembers placing the remains in a dumpster or something intended for trash pickup.

“I knew it would be a disaster,” said Slavit, who recalls being told the boots were thrown out. “I was upset that they took it down without consulting me.” While Silber and Waitz said it would likely be impossible to put the installation back together if found, Slavit is more optimistic that the boots could one day be reassembled.

After learning of the installation’s unfortunate removal, Roth’s search became even broader. If the work was deflated, it could be stored in a smaller unit than he’d initially been looking for. And if cut into multiple pieces, parts of the boots may have even been split up across multiple units.

But Roth remains hopeful, describing his search as an ongoing quest. “Some clues indicate they may have been discarded,” he said. “Other clues in more hopeful directions suggest they’re still out there, waiting for us to find them and return them to their rightful place of Broadway glory.”

Have you seen the boots? Do you know where they are? Email the reporter: atremayne-pengelly@observer.com 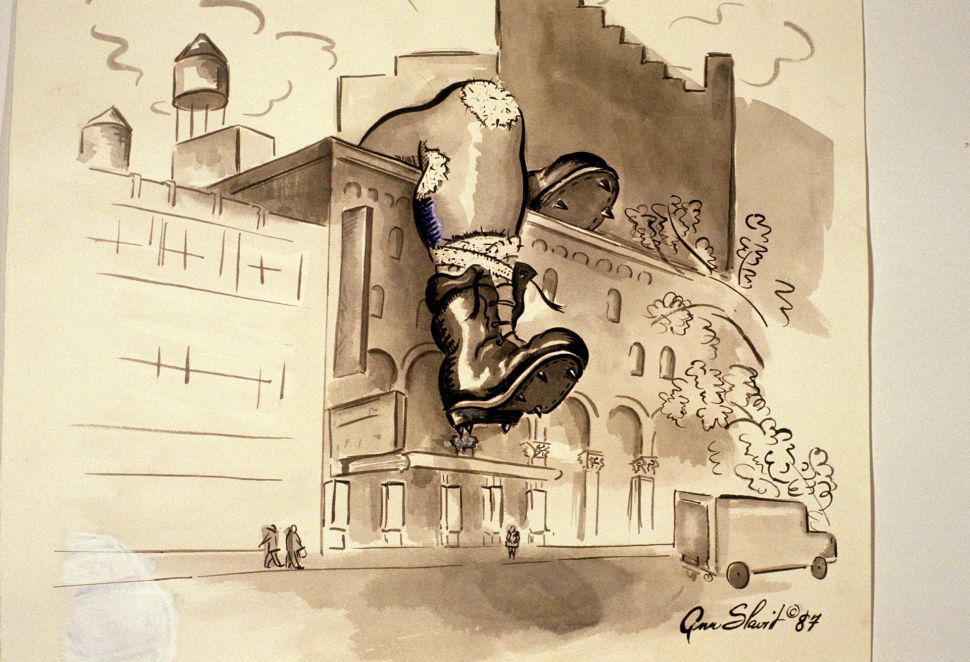 Filed Under: Arts, Broadway, public art, Boots, Into the Wild