East Hampton Town police arrested six people today (July 11) protesting higher taxes for the wealthy outside the East Hampton airport. The demonstration was organized by advocacy group New York Communities for Change, the latest in a series of Hamptons protests over the past few days.

New York Communities for Change is focused on climate emissions caused by wealthy Hampton residents. Around 25 people gathered outside the airport this morning, holding signs that read “tax the rich” and “make billionaires pay.” In addition to linking arms in front of the entrance, one demonstrator stood atop a wooden tripod blocking traffic into the airport. The protest lasted for approximately an hour and a half, said Alice Hu, a climate campaigner for New York Communities for Change, in a phone interview.

“We want to put pressure on the New York legislature and (NY. Gov.) Kathy Hochul to tax the rich and pay for climate action and affordable housing,” Hu said. “The Hamptons is a place where the super-rich hide away from the rest of the world, the world they are helping to kill with the rise of emissions and inequality.”

Climate protests have surged recently in the city and across the country. Last month, climate activists known as the Tyre Extinguishers deflated SUV tires on the Upper East Side, and newspaper distribution in the city was delayed in April after demonstrators blocked entry to the New York Times printing plant in order to protest the publication’s advertising deals with fossil fuel companies. Meanwhile, 14 protestors were arrested on the Fourth of July after blocking a highway in Washington, D.C.

Today’s protest is the fourth organized by New York Communities for Change in the past few days. Demonstrators over the weekend took part in road blockades in South and East Hampton, where 10 people were arrested for disorderly conduct, Hu said.

A petition for the group asks for donations to “help us transport hundreds of climate and housing activists to the Hamptons for four straight days of disruption and direct action.” Other advocates belonging to the New York Taxi Union, Long Island Activists organization, and Shinnecock nation also joined the demonstrations over the weekend.

The protests were organized in response to escalating climate emissions and inequality caused by the wealthy, according to Hu. “They’re heating up our planet and harming working-class people,” she said. “This is the perfect moment to confront two of these critical issues we’re facing, and what better way to do this than send a message to the richest of the rich?”

This is not the first time the East Hampton airport has been a source of outcry. For years, residents have complained about noise pollution and safety concerns stemming from private helicopters and jets landing at the airport. Meanwhile, a bill in New York City looking to ban unessential helicopters in the city, including commuter flights to the Hamptons, was proposed after a significant increase in helicopter noise complaints.

East Hampton Town police were notified of the protest shortly after it began, said Lieutenant Daniel Toia. “They disrupted pedestrian vehicular traffic from coming into the airport during the protest,” he said. However, an employee from the airport confirmed there were no flight delays due to the demonstration.

At least six people were arrested without resisting, likely for disorderly conduct, according to Toia. 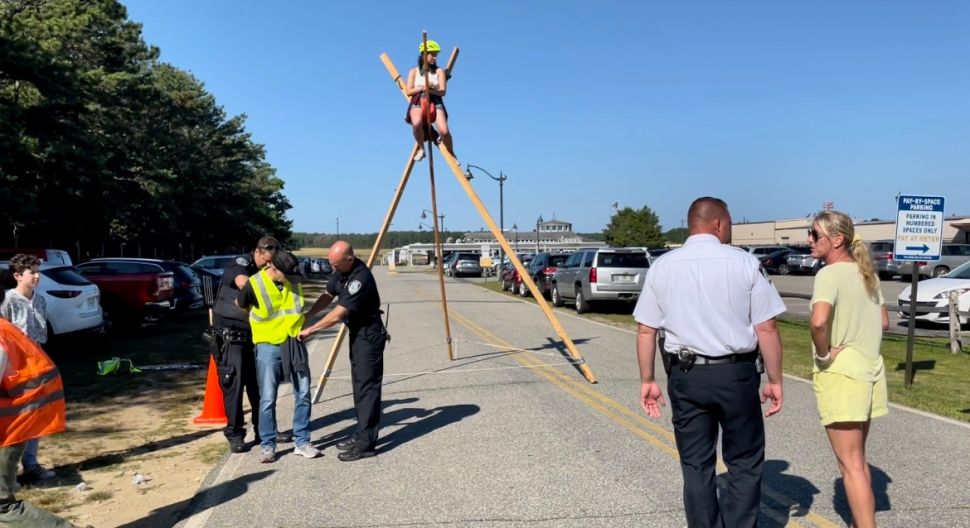