Well, here we are again, back in the land of “spastic colons” and “no-neck monsters” and “mendacity,” with all those rich, rowdy cotton-planting Pollitts from the Mississippi Delta.

We first encountered the Pollitts in 1955 on Broadway in Cat on a Hot Tin Roof, Tennessee Williams’ personal favorite play and his second Pulitzer Prize-winner. There have been five Broadway revivals since, and a Metrocolor-ed movie version with Elizabeth Taylor and Paul Newman. By now, audiences are so primed they can do a sing-a-long with the dialogue.

But the Pollitts are a lively lot, full of dramatic sparks, so they’re back for more, this time—for the first time—Off-Broadway. The Tennessee Williams Estate, which is notoriously picky about who they get to present his plays, is letting the Cat out of the bag and allowing Ruth Stage, a Toms River acting troupe, to bring it to New York and present it at The Theater at St. Clements (423 W. 46th Street) from July 25 to August 14. Directed by Joe Rosario and produced by Matt de Rogatis (who also doubles as Brick Pollitt, opposite Sonoya Mizuno’s Maggie the Cat), the show has had a rocky ride to opening because of Covid cancellations.

“I gave up a couple of shows because it was a project I really wanted to be involved in,” admits a new New York recruit, Alison Fraser. “Stuff came up, and I said, ‘I gotta keep open to these guys.’ They’re renegade theater. They do it their own way, and it’s very exciting.”

Fraser herself is one of their innovations. She has to be the most svelte Big Mama Pollitt on record—the first one you’d suspect of a stripper past (which Fraser does have, after a fashion: she was Tessie Tura in the Patti LuPone Gypsy). “I wanted Big Mama to be slim and attractive. I think Big Daddy calls her big and fat just to torture her,” she says. “Once Sonoya’s Maggie comes into the picture—so beautiful and tall and thin—he really starts needling Big Mama. I don’t know one thin woman who doesn’t think she couldn’t lose a couple of pounds. My mother weighed 100 pounds and was always ‘Oh, I gotta watch my weight.’ Same with Big Mama.”

Fraser’s desire to do Big Mama was not that different from her desire to play Tessie Tura. “I’d never seen myself as either, really,” she confesses, “but when Arthur Laurents pitched the part of Tessie to me, he said, ‘I want to make this one different. I want to make her very angry.’ That, I could see because Tessie is a woman with no education, and she is fast-aging out of the only job she’s had for years and years. What the hell is she going to do? In real life, Tessie went on the road with Gypsy and served as her companion/dresser.”

Similarly, Fraser found much more to mine in Big Mama. “I just don’t think that a pitiful Big Mama is right for this production. She’s not pathetic. She doesn’t cry a lot. I choose my crying moments very carefully. Big Daddy’s not going to make me cry and leave the room. I just say, ‘You’re just being an idiot. I know you don’t mean that.  I know you didn’t mean it in your heart. I know you didn’t.’ When somebody’s sick, you gotta give ‘em a break because they’re facing real horror. Their body is failing them. Their mind is filled with fear. ‘What’s going to happen to my wife? My kids? My grandkids?’ What’s going to happen to this business I’ve built?’ When someone’s sick, they often lash out at the person closest to them, their caretaker. That’s what’s happening here. The whole sex thing is really about impotence. It’s not that he finds his wife unattractive. It’s that he’s sick with colon cancer and has no libido now. That’s killing him because it was part of his driving force in life.”

There may be a voice-of-experience ring to that. In 2003, Fraser lost her husband, songwriter-cabaret artist Rusty Magee, to colon cancer.  “Again, that was one of the reasons I was drawn to this material. I do understand what a traumatic illness can do to the dynamics of a family household, especially with children involved. This Big Mama is a very capable woman. She has been taking care of a man with colon cancer now for five years—and taking care of his business for three years. It’s obvious they had sex until he got sick.”

Big Mama’s competence grows in Act III, once the mendacity of a spastic colon has been revealed to be full-on cancer. “I wanted it to be a very strong take on Big Mama because she’s in the catbird seat,” she says. “A Southern-gentleman friend, Hob Bryan, the senior state senator from Mississippi, explained it to me as statute. He said, ‘According to Mississippi law, the widow has the right to stay in the plantation the rest of her life.’ There is no way Big Mama will be disinherited. She will always have a major stake till she dies.”

The version of Cat on a Hot Tin Roof being presented at St. Clements is the one that Williams restored for the 1974 Broadway revival that starred Elizabeth Ashley and Keir Dullea. Profanity has been put back in, along with passages that director Elia Kazan had Williams remove from the original 1955 production. There is more good news: two of Gooper and Mae Pollitt’s “no-neck monsters” didn’t make the final cut. The result, Fraser feels, may shock patrons, especially those who remember the even more neutered movie.

Fraser, who hails from a Tony-nominated musical past (1988’s Romance/Romance and 1991’s The Secret Garden), has more than strippers and widows-in-the-making in her gallery. She’s been a deliciously twisted nun (Charles Busch’s The Divine Sister), two first ladies (Nancy Reagan and Betty Ford, both in Michael John LaChiusa’s First Daughters Suite), singers with Beehive ‘dos, an uppity old-school aristocrat (Shaw’s Heartbreak House), and Lizzie Borden.

An acting survivor, she is, in short, up for anything, with the following qualifications: “as long as it’s an interesting piece with devoted, passionate people involved who understand my process, which is, basically, ‘I want that show to be so good. You can listen to what I have to say about it or not. Maybe I’ll have ten bad ideas, but I will have one or two great ideas. You listen to them all, and you edit them out, okay?’ That’s really what Joe does.”

And that’s the little secret that keeps her chronically employed. 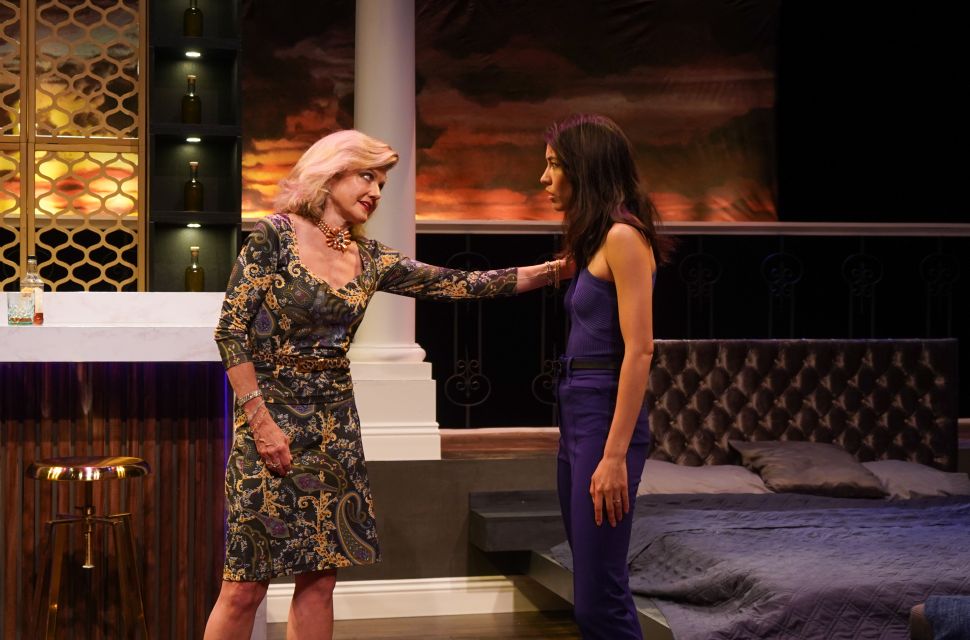