A union battle of David-and-Goliath proportions.AFP via Getty Images
By Courtney Vinopal • 07/21/22 11:02am

For more than 25 days in June and July the battle over organized labor at Amazon took place on Zoom, as the company presented its case to overturn an independent union’s victory at a Staten Island warehouse.

In April the Amazon Labor Union (ALU), which came together in under a year, clinched a historic victory by organizing the retailer’s JFK8 warehouse, which employs more than 8,000 workers. But rather than begin negotiating a contract with the union, Amazon took it to court, filing 25 objections with the National Labor Relations Board alleging the ALU and the board itself “suppressed and influenced” the outcome of the election.

This legal challenge set the stage for the second-largest employer in the U.S. to delay contract negotiations with the upstart union, a conflict between a company worth more than $1 trillion and an organization that’s been around for less than three years. Some ALU organizers fear Amazon will take the case all the way to the Supreme Court before they come to the bargaining table, a process that could take years. Amazon, however, says it’s simply ensuring the election was properly decided.

“The victory in Staten Island was a shock to (Amazon),” says Kate Bronfenbrenner, the director of labor education research at Cornell University’s School of Industrial and Labor Relations. “This could stall things indefinitely, that’s their idea.”

Though Amazon’s anti-union tactics aren’t new, the independence of the ALU makes the fight particularly lopsided. National unions have money and legal resources to help support unions when corporations take them to court, but the ALU is a grassroots movement relying on donations and pro bono legal support.

Union struggles to build momentum at other warehouses

For years Amazon successfully fended off labor unions by using a fairly standard corporate playbook, says Bronfenbrenner. By engaging in intimidation tactics such as surveilling workers likely to organize, or requiring employees to attend anti-union meetings, the retailer fought off unions from Middletown, Delaware to Chester, Virginia to Bessemer, Alabama.

But the playbook didn’t work in the case of JFK8, where workers voted 2,654 to 2,131 to join the ALU. Rather than recognize the union, Amazon is now arguing against its legitimacy.

In the meantime the ALU is seeking to notch a second union win. The ALU lost a vote at a second warehouse in Staten Island in May, and while it’s organizing other workers in Campbellsville, Kentucky and Albany, the ongoing legal battle with Amazon looms over these efforts.

“Unfortunately Amazon has millions of dollars to spend on lawyers, and we don’t,” said Angelika Maldonado, who is interim vice president of the ALU. “They’re trying to wear the committee out, wear the NLRB out, and wear the lawyers out, until we give up.” Maldonado is still working part-time as a packer in Amazon’s JFK8 warehouse, a role she now balances with childcare responsibilities and her leadership position with the union. She was one of the witnesses called to testify by Amazon during the month-long NLRB hearing, in addition to Chris Smalls, the union president.

Amazon, a $1.2 trillion company, spent roughly $4.3 million on anti-union consultants in 2021, according to Labor Department documents obtained by HuffPost. It hired the legal firm Hunton Andrews Kurth for the NLRB hearings, whose equity partners brought in an average profit of $1.6 million each for the company last year, according to survey data from the National Law Journal and American Lawyer.

Lawyers provided their services pro bono to the ALU during the NLRB objections, Maldonado said. The union has raised about $441,263 through its GoFundMe page and has been collecting donations through its website as well. The ALU plans to release a report on its finances once the union is recognized.

“At this point, even though the union won with a substantial margin, there’s no limit to how much money Amazon will keep spending rather than having to deal with the workers in Staten Island,” said Gene Bruskin, a veteran organizer who has advised the ALU and other Amazon organizers throughout the country.

For its part Amazon maintains that the election was rigged. Though 8,325 workers were eligible to vote, only 4,785 did, according to the NLRB. “Fewer than a third of the employees at the site voted for the union, and overall turnout was unusually low,” Amazon spokesperson Kelly Nantel said in a statement. She added Amazon believed the evidence presented by the company will demonstrate the NLRB and the ALU “improperly suppressed and influenced the vote.”

As Amazon fights for its business, workers lose momentum

There are plenty of business-related reasons Amazon would want to fight a union, says Gabriel Winant, a labor historian at the University of Chicago. He said it’s difficult to imagine how the business’s retail model—which runs on tight margins and relies on ultra-fast low cost logistics—could continue to deliver if workers were heavily organized.

“We can expect they’ll fight pretty fiercely,” Winant said of Amazon in an email. “Cheap labor with no other choices is the basis of that next-day delivery model.”

As Amazon fights to preserve its business, organizers are losing opportunities to unionize more warehouses. “Delay itself is a powerful tactic here, since workers have a hard time sticking together over the long haul if they get the sense that victory is far away or unachievable,” Winant said. “So even just slowing the process down with bureaucratic legal tactics is a powerful tool for the employer.”

Organizer Bruskin said the legal fight between Amazon and workers at JFK8 is giving employees in different parts of the country pause when it comes to pursuing a union election. Instead, workers are organizing for smaller concessions, such as Chicago warehouse workers who won a raise after walking out in December. Earlier this month Amazon was unable to reach a deal to build a cargo hub at Newark Liberty Airport following opposition from labor groups.

Amazon finished presenting its objections before the NLRB on July 18 and Seth Goldstein, a labor lawyer working with the ALU, is hoping the board will deliver a decision in the coming weeks. The longer it takes the board to certify the union, the longer it will take to secure a fair contract. The ALU has said it’s seeking longer breaks for warehouse employees, more time off, and a minimum wage of $30 an hour, up from the current starting hourly rate of $18, through collective bargaining.

Goldstein said he expects Amazon will refuse to bargain with the union. He noted Kurt Larkin, an attorney representing Amazon, has litigated numerous labor cases including one challenging rules allowing unions to display inflatable cartoon figures (such as the well-known “Scabby the Rat”) in businesses that don’t employ union workers.

Still, he has no intention to quit, and has recruited 30 law students to help defend the ALU—one sign of the historic public support for unions in the U.S. right now. “Money or not, we’re going to meet the challenge,” he said. 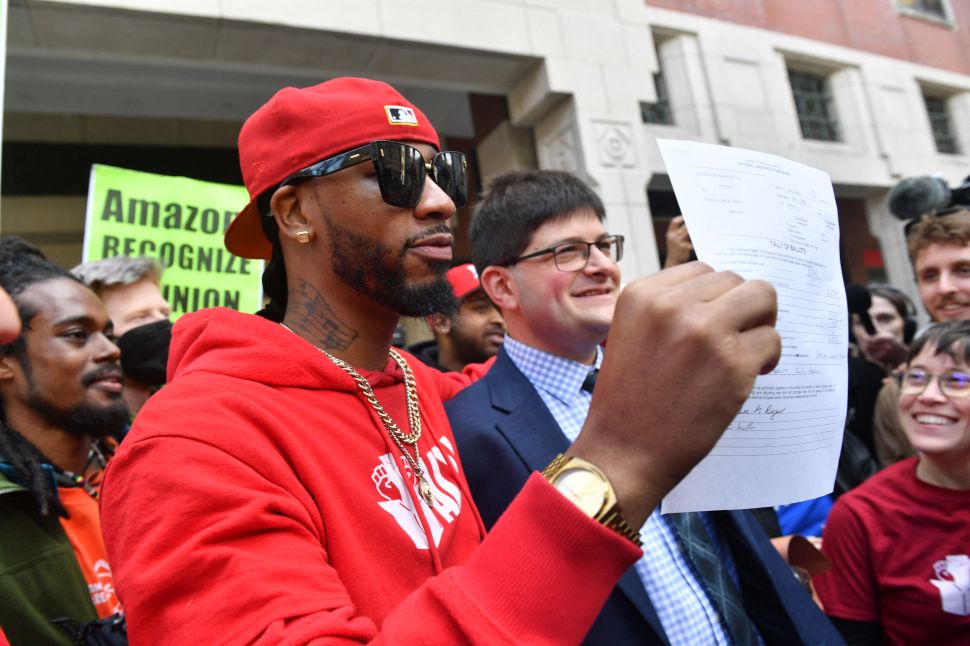