This past May, Better Call Saul left its audience on its most shocking cliffhanger yet, with the full weight of Jimmy McGill (Bob Odenkirk) and Kim Wexler’s (Rhea Seehorn) misdeeds falling on the head of their chief rival, Howard Hamlin (Patrick Fabian). Last night, the series returned with the first of its final seven episodes, delivering an absolutely nail-biting resolution to the show’s most urgent storylines. As ever, the creators of Better Call Saul prove themselves masters of suspense, character drama, and dramatic irony, as this prequel nears its inevitable impact with the acclaimed series from which it sprung. And, just as reliably, the triumph of this hour of television is owed to the taught direction of co-creator Vince Gilligan and an outstanding performance from co-star Rhea Seehorn.

Better Call Saul habitually opens on a teasing, close-up image of some seemingly innocuous object, the significance of which may not be clear until the end of the episode. This week, however, Gilligan selects an image that provides closure to one of the mid-season finale’s lingering questions, showing us the scene of Howard Hamlin’s staged suicide. We already know, of course, that Howard has been murdered, shot dead ever so casually by gangster Lalo Salamanca (Tony Dalton) simply for being in the wrong place at the wrong time. From the start, we’re shown that the resolution of Howard’s death will not be part of the suspense of this episode, that we’ll be asked to dismiss it as swiftly as Lalo does, but also that we’ll never be able to forget it. Like so many of Better Call Saul’s memorable cold opens, we’ll be reminded of it soon enough when we close on Howard’s true final resting place beneath the secret meth lab of Gustavo Fring (Giancarlo Esposito).

It’s teasers like these that amplify Better Call Saul’s sense of inevitable doom, the promise that this story can only end in a worse place than it started. This is a prequel, after all, meaning that some outcomes are inevitable and some are impossible. Vince Gilligan, Peter Gould and company thrive under these storytelling conditions, making careful use of what the audience does and doesn’t know for maximum suspense and emotional effect. This series is speeding towards a rendezvous with the timeline of Breaking Bad, but that foreknowledge brings more dread than excitement. Yes, fans are expecting appearances by Bryan Cranston and Aaron Paul as Walter White and Jesse Pinkman, but frankly, Better Call Saul doesn’t need them. Their approach raises our blood pressure because we’re all but certain that it means the departure of Kim Wexler, Saul’s sole remaining character whose fate is a mystery. We don’t know how she leaves Jimmy’s life, but we have a good idea when it happens. Just as in the case of Walter White’s unfortunate partner in crime, we can only hope that she makes it out alive.

The suspense that Gilligan, writer Gordon Smith, and actor Rhea Seehorn build around Kim in “Point and Shoot” is absolute agony, as she is sent on a deadly errand by Lalo Salamanca (Tony Dalton). Calling Seehorn’s performance here “gripping” would be a criminal understatement; during her scenes of panic in the episode’s first act, it is impossible to center your attention anywhere else. The juxtaposition of Kim’s fear and Lalo’s total calm is shocking, and her voyage of the damned to the home of Gustavo Fring is a sustained heart attack of a sequence. Seehorn brings exactly the right mixture of anxiety and mechanical focus to her performance, at once conveying Kim’s trauma, despair, and determination to keep her husband alive. Aided by piano-wire tense direction and cinematography, Seehorn asserts herself yet again as the cast’s most valuable player. We can only hope that Emmy voters finally take notice.

Giancarlo Esposito also makes the most of his opportunity to demonstrate both his own brilliance and that of his character during his final showdown with Lalo Salamanca. Better Call Saul has dedicated years to adding further dimension to the already complex Breaking Bad antagonist, portraying him as an endlessly diligent antihero on a decades-long quest for revenge against the cartel that murdered his partner, Max. Both Gus and his adversary are murderous monsters, but even if his survival were not a foregone conclusion, we’d be compelled to root for him against Lalo because Gus has worked so damn hard to get to this point. Better Call Saul has been about Gus building his empire as much as it’s been about Jimmy McGill creating Saul Goodman, and even if you believe that the world is a better place without Gus Fring, it would be unacceptable to see all of this effort go to waste, especially at the hands of a smiling jackal like Lalo Salamanca.

Considering that six episodes remain in the series, “Point and Shoot” puts a surprising number of subplots to bed. Lalo and Howard, the antagonists of Gus and Jimmy and Kim’s respective storylines from the first half of the season, now share a grave beneath Walter and Jesse’s future workplace. While the three of them and stonefaced fixer Mike Ehrmantraut (Jonathan Banks) will no doubt spend the weeks ahead coping with the practical aftermath of these murders, the immediate threat has passed. Now, the emotional fallout takes paramount importance, as Kim copes with her first encounter with the mortal stakes of this series. Kim has spent the past season and a half acclimatizing herself to moral compromise, proving to herself and to Howard that she’s nobody’s patsy. But, is she prepared to live with her participation in his death? What role will it play in her fate at the end of the series? Will she find a way to escape or to cope with the mess that she and Jimmy have made? Or will she, like Howard, become a loose end to be disposed of in an unmarked grave?

We’ll have our answers in six weeks’ time. 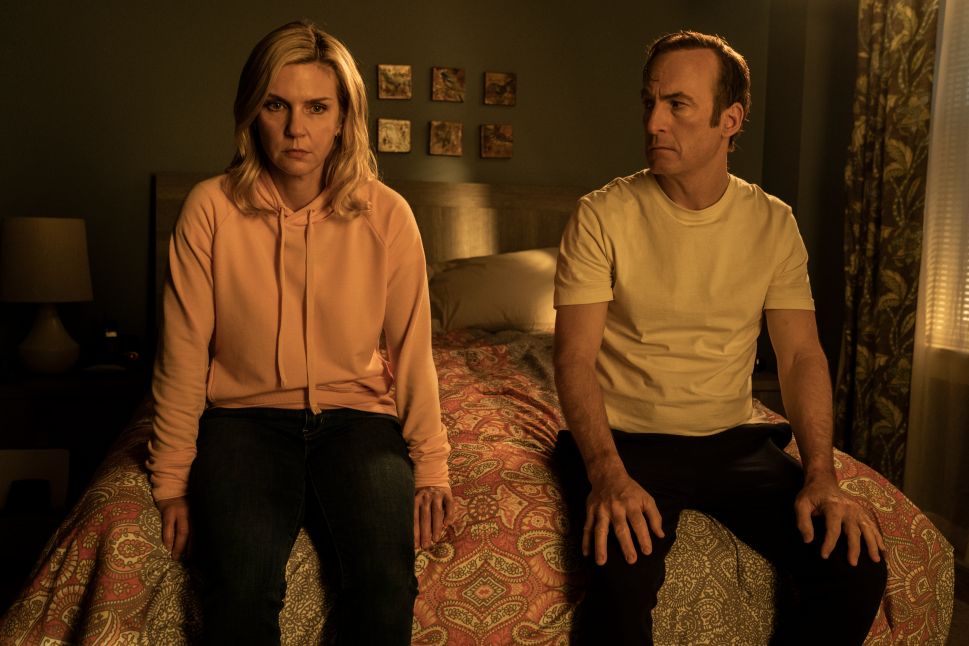