As scripted, documentary-style fact-based dramas go, it doesn’t get much better than this.  Thirteen Lives is the third film to document the harrowing events in the summer of 2018 surrounding the heroic rescue efforts of a team of the world’s most accomplished underwater divers to save 12 young members of a Thai soccer team and their coach, trapped in the flooded Tham Luang Cave, but it has special appeal because although it’s a long and arduous slog, it benefits enormously from the direction of Ron Howard with his usual polish and skill for making every minute count.

800 meters from the entrance, in the pitch-black darkness, the footballers were savaged by a premature rainy-season monsoon, oxygen levels plummeted, the cave walls collapsed, rendering the passageways in the underground tunnels  too narrow to crawl or swim through.  By midnight, the parents outside the cave in the pouring rain began to panic, and the area was crawling with everyone from friends and relatives to NAVY seals.  Currents shifted, first responders were up to their necks in , and rescuing the boys looked hopeless, but the movie is just beginning.  It really begins to perk when volunteer divers, called “spelunks”, arrive and devise a strategy to drag the boys underneath the murky to the exit hole without drowning, while the eyes of the world watched in horror. The  headline-making ordeal lasted three weeks, and attracted the help of 5,000 volunteers from 18 countries.  Howard’s film is not so much about the trapped athletes as it is about the physical and emotional dangers faced by the confused but gritty and determined middle-aged rescuers, led by England’s Richard Stanton (Viggo Mortensen, unrecognizable with a shaved head) John Volanthen (Colin Farrell), macho American Chris Jewell (Tom Bateman), and Australian anesthesiologist Dr. Harry Harris (Joel Edgerton), who put their heads together and concocted a dangerous, controversial plan to tranquilize the children, then knock them out with syringes of atropine and ketamine, and literally  float them horizontally, one by one, below the surface of the , encountering every unimaginable near-death experience along the way.  Unethical, illegal and never tried before, the plan was rejected by Thai government authorities, but with air running out and hypothermia setting in, it was a last resort with miraculous results.  Since we know the outcome already, the facts might seem like deja vu under someone else’s direction, but Howard artfully balances the tension inside the cave with the circus-like atmosphere that develops outside, similar to  Billy Wilder’s Ace in the Hole.

The harrowing events of this subterranean nightmare that were previously explored in the  documentaries The Rescue  and The Cave are greatly enhanced by William Nicholson’s meticulous screenplay, and thrillingly photographed by Thai cinematographer Sayombhu Mukdeeprom, who shot Call Me By Your Name.  The first-rate production values are matched by the galvanizing emotional force in Ron Howard’s craftsmanlike direction, which gives the journalistic saga a human dimension that makes you feel the terror and heroism even more.  Howard has proved, in recent years, a special interest  in realistic human dramas like Frost/Nixon and documentary portraits of real people as diverse as the Beatles and Luciano Pavarotti.   Combining all of his strengths in one dynamic thriller, Thirteen Lives is a great tribute to the resilience of the human spirit at a time when it takes a crisis to bring out the best in people. 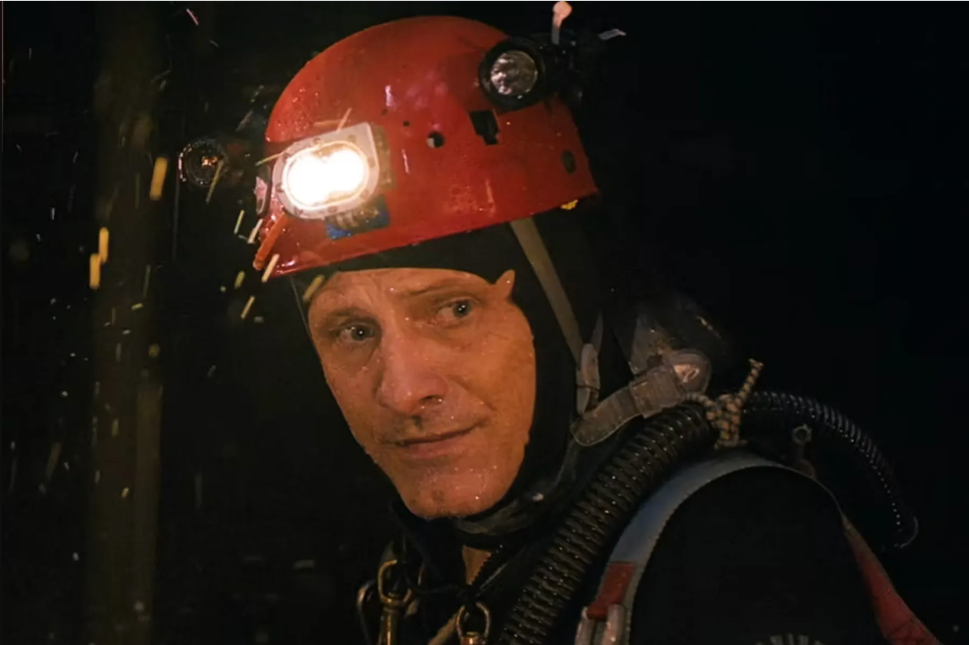