Head of Instagram Adam Mosseri said in an interview with Casey Newton that Instagram will pause the test that garnered the ire of influencers such as Kylie Jenner and Kim Kardashian.

“I’m glad we took a risk — if we’re not failing every once in a while, we’re not thinking big enough or bold enough,” Instagram chief Adam Mosseri told Newton. “But we definitely need to take a big step back and regroup. [When] we’ve learned a lot, then we come back with some sort of new idea or iteration. So we’re going to work through that.”

As expected, Mosseri cited internal data that showed users really did not like the changes and engagement wasn’t going up, despite the overall (and very real) trend toward video consumption.

The statement comes shortly after Mosseri posted a video response to a user backlash over Instagram (a photo-sharing app) becoming TikTok (a video entertainment app). The grassroots revolt on Instagram was started by photographer and influencer Tati Bruening over the weekend, reached the lofty heights of influencer royalty when Kylie Jenner added the plea to “make Instagram Instagram again” to her story.

Meanwhile, Meta CEO Mark Zuckerberg recently said that the company plans to double the amount of content from recommended accounts that appears in feeds by next year.

Kylie is notorious for causing significant pain to Snapchat with a single tweet, so it’s no surprise that the head of Instagram, Adam Mosseri was forced to respond.

In his original video, he began by reassuring everyone that the TikTok-knockoff version of Instagram was simply a test and describes it accurately as “not good.” Shortly after that he transitions into what we all knew was coming, a speech about how people are consuming, sharing, and posting video — not photos. Mosseri is correct about all of this, but that didn’t stop Bruening’s Change.org petition from gathering more than 100,000 signatures in only 48 hours, according to a statement from Change.org.

“We’re going to have to lean into this shift while continuing to support photos,” Mosseri said, before moving on to addressing “Recommendations” — Instagram-speak for Meta’s attempt at creating a For You Page, the discovery mechanism that has made TikTok by far the most engaging app in the marketplace. But while TikTok’s algorithm works as if by magic, Instagram’s random injections of strange content into your curated feed do not. And Mosseri knows it.

“Now if you’re seeing things in your feed that are recommendations that you are not interested in, that means we are doing a bad job ranking, and we need to improve. And you can X out a recommendation. You can even snooze all recommendations for up to a month.”

Which is probably what you should still do if you don’t like the overall direction of Instagram. With roughly one billion monthly active users and Meta’s notoriously slavish adherence to metrics above all else, it’s going to take a mountain of hard data showing users abandoning the app to get Mosseri to make a different video, and Meta to halt plans for its “discovery engine.”

I wanted to address a few things we’re working on to make Instagram a better experience.

Please let me know what you think 👇🏼 pic.twitter.com/x1If5qrCyS 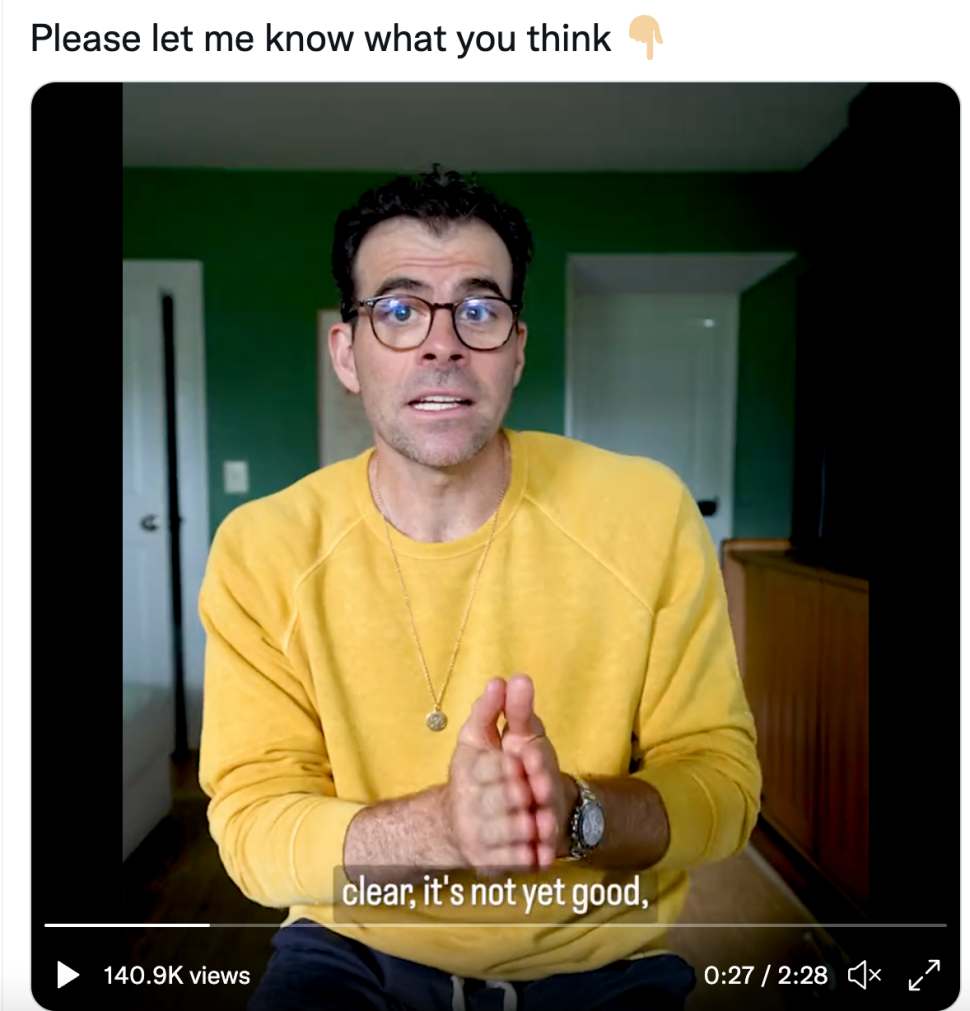