Sotheby’s will be auctioning off a 76 million-year-old dinosaur skeleton in New York City later this month. The recently discovered fossil of Gorgosaurus,  a close relative of the Tyrannosaurus Rex, is estimated to sell for $5 million to $8 million. Paleontologists worry these types of private sales deprive the public of viewing important fossils and scientists from studying them.

Other recent transactions include Christie’s sale of a dinosaur skeleton in May for $12.4 million and its 2020 auction of “Stan” the T-Rex for $31.8 million, the most expensive dinosaur ever sold.

“This is a concerning sale, like they all are,” said Lawrence Witmer, a paleontologist and professor at Ohio University. “When they go into private hands they may disappear, and we may never be able to study them as scientists.”

Sotheby’s skeleton is particularly rare because it was found in the U.S., said Witmer, whereas most Gorgosaurus’s have been excavated in Canada. The fossil was discovered in 2018 near Havre, Montana, according to an emailed press release from Sotheby’s. Witmer also described fossil auction sales as a largely American phenomenon, because the U.S. doesn’t have antiquity laws pertaining to specimens collected on private land.

Excavations on public land are heavily regulated, require permitting for researchers from public institutions and often are off-limits for private fossil hunters. However, museums and universities don’t have the resources to send field crews to private lands, where landowners frequently charge a fee. Fossils on these lands are therefore primarily found by private collection companies.

Important dinosaur fossils are going to wealthy buyers instead of scientists

“Private companies can go out there for months on end and fund crews,” Witmer said. “They basically live or die on the sales of these specimens.” But in order to pay for their business and the high cost of excavating, their discoveries often go up for auction at prices that museums can’t afford. “The only people who can get them are rich people who want to have trophies.”

Public institutions receive fossils from shorter field expeditions, in addition to purchasing them from private owners or receiving donations. Sometimes museum donors will even pool money in order to purchase skeletons at auction, according to Witmer.

“It used to be that an auction value for fossils was comparable to prices paid by museums,” said Peter Larson, president of private collection company Black Hills Institute of Geological Research in South Dakota. “In the past few years, auctions have brought money more in line with what they’re worth.”

While Black Hills Institute sells its most important finds to museums, it needs to make more lucrative sales to private owners in order to survive as a business, said Larson. “It’s important to make some profit on the fossils, so you can pay for the ones that don’t make you any money.” He estimated that 80 percent of its business comes from museum sales, and sometimes works are donated free of charge.

And although they often end up in the hands of private owners, fossils found on private lands by collection companies would never have been discovered otherwise, Larson said. Sotheby’s dinosaur skeleton, for example, will likely shed light on a new species of the Gorgosaurus. “I’m sure that eventually it’ll end up in a museum. Even if it takes decades, that’s okay. It’s saved.” 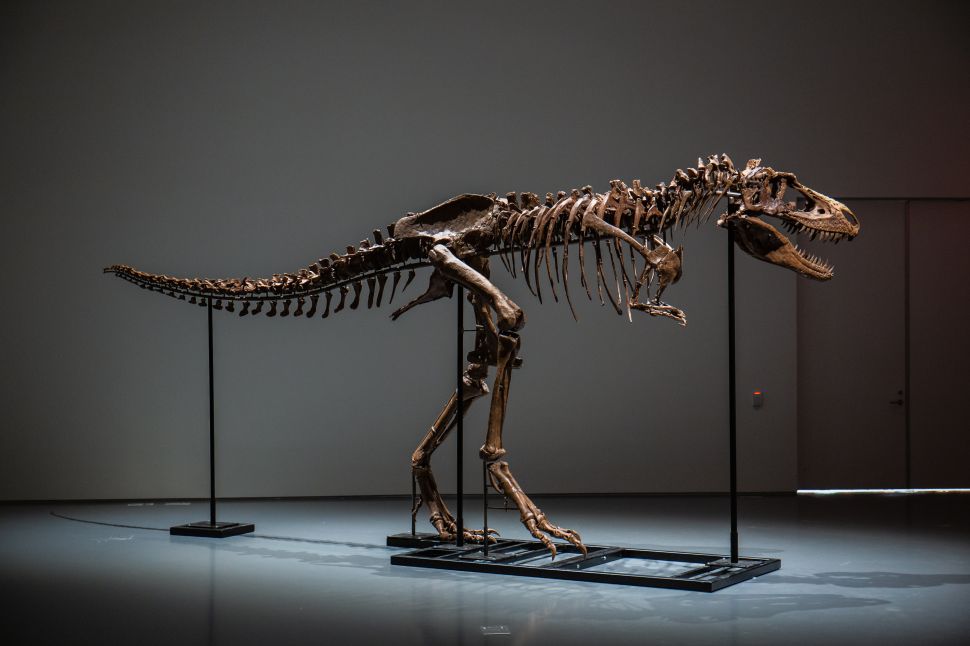