Mrs. Harris Goes to Paris is the newest version of Paul Gallico’s popular and enduring 1958 novel about Ada Harris, a poor, widowed British cleaning woman who scrubs the floors of London on her hands and knees to sock away enough money to fulfill her dream of owning a priceless, authentically original Christian Dior gown before she dies. Angela Lansbury was a memorable Mrs. Harris in the 1992 TV production, directed by her son Anthony Shaw and filmed in Budapest. In its new incarnation, directed by Anthony Fabian, the fable comes to life again with the renewed vigor, energy and craft of the great character actress Lesley Manville, who brings her own set of dynamics to the role and scores a huge personal triumph.

Versatile and fearless, I applauded her Oscar-nominated turn as the villainous sister of Daniel Day Lewis who poisoned him with mushrooms in The Phantom Thread, and loved her even more for her passionate portrayal of the venomous American matriarch of a violent clan of North Dakota gangsters in the underrated western Let Him Go. In a gorgeous change of pace as Mrs. Harris, she pours tea and sympathy to everyone in need and captivates them all. The result is a heart-warming, utterly happy-making entertainment with another bouquet of rave reviews to prove it.

Set in the late Fifties, the movie begins by showing the bland daily routine of a working-class domestic, leaving her modest flat every morning, joining her best friend on the bus on their way to underpaid and unappreciated jobs that offer few rewards and no future. But Mrs. Harris has a decency and a sense of humor that guarantee survival. Then one day, draped across a chair in the home of one of her most irritating and least favorite lady employers, she discovers a Dior gown so exquisite she has never seen anything more beautiful.

Determined to buy one of her own, Ada scrimps and saves every sixpence, putting away a few quid here and there—from gambling on the lottery and the dog races, an unexpected profit for back pay on her late husband’s pension, a small award for finding a lost ring—anything that will add up to the 500 pounds required for her goal. (I told you it’s a fairy tale; today a week in Paris would cost you that much in taxi fares.) Eventually, with her earnings in small bills rolled up in an old purse, it’s off to the City of Light where a larky adventure awaits and the real movie begins.

Arriving at 30 Avenue Montaigne with the aid of a motley crew of ragged vagrants who could easily rob her but instead guide her safely to the legendary House of Dior, Mrs. Harris is immediately threatened with ejection by the salon’s haughty manager and creative director, one Claudine Colbert (no relation to Claudette) who shows her hateful superiority by calling security. Next to Mrs. Harris, Madame Colbert is the film’s most mesmerizing character, played with icy panache by Isabelle Huppert, in one of her rare film appearances in English. With her pursed lips and forced, sardonic world-weary smile, she’s the perfect embodiment of French arrogance, and the tangible antithesis of Mrs. Harris’ down-to-earth pragmatism. But all of the other French snobs Mrs. Harris encounters are so impressed by her lack of pretense and her refreshing honesty that they accept her unconditionally.

Against all plausible odds, she is rescued by a dashing French marquis (Lambert Wilson) who invites her to join him in a front-row seat for the unveiling of the latest Dior fashion line. Andre Fauvel (Lucas Bravo), the handsome Dior account executive and business manager, offers her a place to stay in his private Paris apartment, and during the week when the gown she selects is meticulously custom designed, sewn and fitted, she repays him by orchestrating a romance between him and a lovely Dior model (Alba Baptista) that changes both of their lives forever, and eventually conquers the great Christian Dior himself, while saving the world of haute couture by preventing a strike that saves him millions in layoffs. Meanwhile, from the Eiffel Tower to the flower markets in the Seine, the viewer gets the most rapturous tour of Paris since Audrey Hepburn, Fred Astaire and Kay Thompson made movie history in Funny Face.

I can’t pretend I found Mrs. Harris’ captivating trip to France entirely convincing, especially the resolve of what she eventually does with the Dior dress, but the film is so delicious, the cinematography so lush and Anthony Fabian’s direction and screenplay (with assistance by other writers) so secure and neatly tied with ribbons of grosgrain satin that my advice is suspend all disbelief, throw logic to the wind, and just enjoy it for the entertainment value it provides. Nothing wrong with a movie in today’s troubled winter of discontent that exists solely for the purpose of creating joy and good will, and Mrs. Harris Goes to Paris spreads them around like butter. 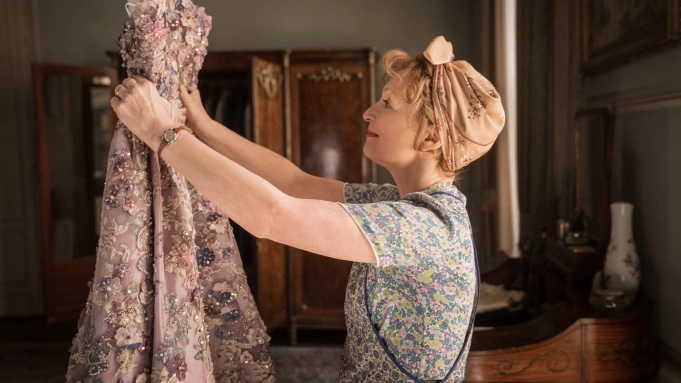