It’s been ages since we’ve had a good ghost story or a lurid return to the terrifying subject of witchcraft.  Interjecting aborted elements of both, a murky, pretentious bore called She Will is neither.  But it has its moments.

A train speeds through the night, carrying a corpse-like women pale as rice.  She’s accompanied by a creepy nurse who forces her to take a pill, suffering agonizing repercussions.  When she recovers and arrives at her destination, a remote mansion in the frozen mountains of Scotland, a strange group of unwelcome visitors await them.  A discarded newspaper identifies the woman as Veronica Ghent, the faded star of a 1969 horror film titled Navajo Frontier. Veronica, played by the reliable Alice Krige, is a patient recovering from a double mastectomy who needs a place that promises the kind of total quiet and rest only a cemetery can provide.  She’s come to the right place.  As she and her nurse companion, a faded zombie called Desi (Kota Eberhardt), travel through the woods to an even creepier cabin where blood drips from the faucets with the bath ,  it’s quite a spell before the alleged thrills begin.  Wandering outdoors in a white nightgown, a black ooze runs over Veronica’s bare foot and into the house.  Although nothing is ever fully or even marginally explained, it is revealed that years ago, women found therapeutic value in the black soul due to the high volume of human ashes from the females who were burned as witches there. While never remotely scary, I guess She Will is still ghoulish and unconventional enough to be embraced by a vast mass of witchcraft fans , but as the ghosts of the victims of male supremacy and dominance who torched them at the stake 100 years ago begin to take shape, I found the special effects intriguing.

Into the midst of all this weirdness comes none other than Malcolm McDowell, unrecognizable in white beard and wrinkles, and looking like Santa Claus.  Instead of Basil Rathbone, he plays Eric Hathbourne (who could make up these names?), an eccentric director planning a remake of Navajo Frontier, the film Veronica made when she was 13.  Much is made of the inference that something awful happened during the shoot that turned the direction of her life into a downward spiral, although, like just about everything in She Will,  it is never clear what that “something awful” was.  Anyway, Veronica goes bat-shit off her noodle and the movie collapses as she plots revenge by applying the rituals of the “Me Too” movement to the gruesome profanities of ancient sorcery.  The best thing you can say about writer-director Charlotte Colbert (no relation to Claudette) is she does remarkable things with mud. 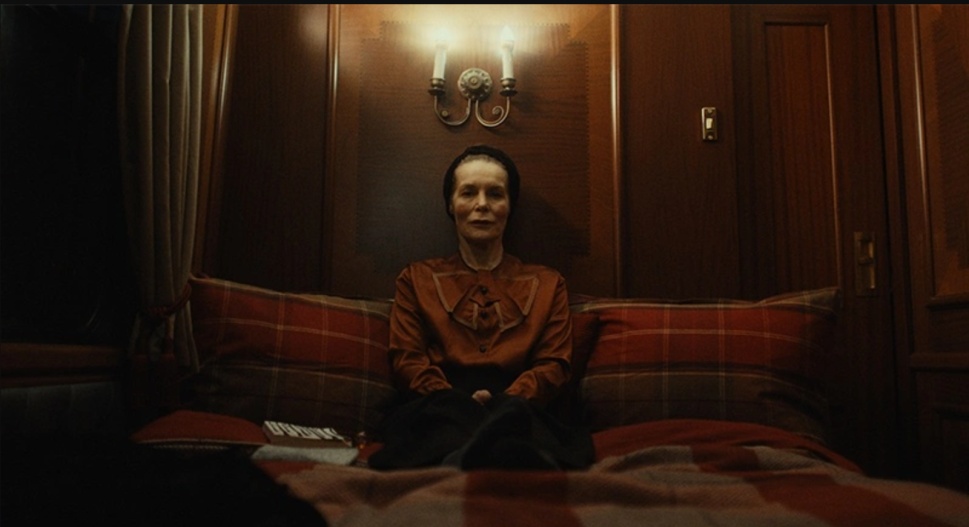