From Ireland, Mr. Malcolm’s List is a lavishly photographed romantic period piece with a cast of enchanting unknowns that attempts to be a colorblind Jane Austen social satire.  Its failure is nevertheless lovely to look at and worthy of attention.

In 1818, two graduates of Mrs. Finch’s Ladies Academy—who vowed as youngsters to remain loyal friends forever and find each other proper husbands—are faced with a sudden dilemma. When Julia Thistlewaite (lively, irresistible newcomer Zawe Ashton) sets her sights on titled nobleman and eligible bachelor Jeremy Malcolm (Ṣọpẹ́ Dìrísù), he rejects her flirtations and dumps her after one date at the opera. Humiliated and furious, Julia vows revenge and enlists the aid of her old friend Selina Dalton (Freida Pinto).

Mr. Malcolm is arrogant and rich, with a reputation for being a seeker of fortunes, a searcher for a suitable wife regardless of her feelings, and a destroyer of young girls’ dreams. To those ends, he keeps a callous, self-serving list of qualifications for a bride. Selina doesn’t even know him, but in her friend Julia’s defense she hates him already. So the girls form a list of their own, determined to give Mr. Malcolm a dose of his own arsenic. An elaborate deception is set into motion involving a makeover that includes exhaustive instructions in seductive fashions, elegant manners, extensive cultural education and naïve idealism.

The list backfires, however, when Selina gets to know Mr. Malcolm and he doesn’t seem to be the rogue Julia described, causing a rift between the two women. On a weekend excursion to Mr. Malcolm’s fabulous country estate in Kent, the complex relationships are revealed at a masquerade ball when the masks come off. Selina falls for Mr. Malcolm, Julia finds unexpected contentment at last with a revered captain in the military (another scene-stealing performance by Theo James, star of the new hit TV series The Time Traveler’s Wife), Julia’s brother discovers how much he enjoys wearing women’s clothes, and the attempt to emulate the ironies in Jane Austen’s Sense and Sensibility never achieves the spark it intends.

Under the first-time direction of Emma Holly Jones, working from a script adapted by first-time screenplay writer Suzanne Allain from her own novel, Mr. Malcolm’s List  awkwardly depicts an England of pure imagination where society is dominated by Black aristocrats who live in London’s Berkeley Square with white servants, hosting lavish balls, and everyone is color blind. There is no such thing as racism (or races) here, which is all quite admirable, if not historically preposterous. I’m happy to go with the flow, and the cast is so good they’re worth it. Best to go, enjoy, and forget about it. 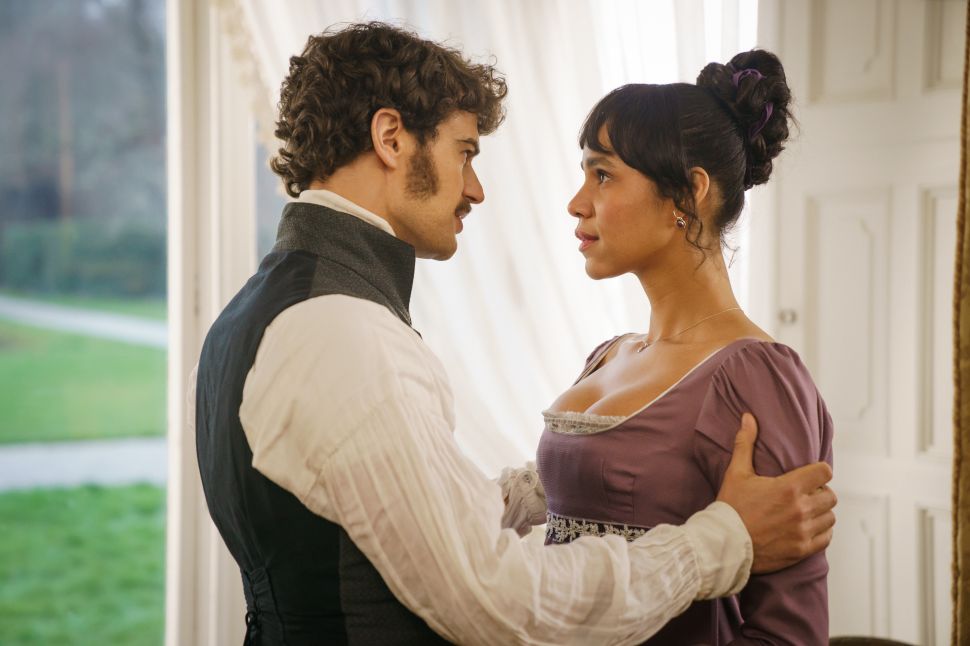