Jordan Peele is one of the few filmmakers in Hollywood who can attract the interest of a mass audience on name alone. His films are promoted via enigmatic marketing that attempts to obscure as much of the premise and plot as possible, challenging audiences to be the first to find out what the new Jordan Peele movie is even about. This allows him a freedom that few current directors enjoy: to be weird on a studio budget. Peele has used this license to create a 135-minute horror-comedy-sci-fi-western, something novel in itself. Unfortunately, I have to report that the result of this experiment are mixed. Nope contains all the chills, laughs, and lofty ideas that one would expect from the thriller auteur, but for all its ambition, it ends up feeling a bit scattered.

Daniel Kaluuya and Keke Palmer star as OJ (short for Otis Junior) and Em (short for Emerald) Haywood, siblings who have been left to run their family business as Hollywood horse trainers after the death of their father (Keith David). The Haywoods are descended from the Black jockey who starred in history’s first motion picture in 1880, a two-second loop of a horse and rider. Scholars remember the name of the white man who shot the film and even the name of the horse, but their great-great-great-grandfather’s name was excluded from the history books. Now, with Haywood’s Hollywood Horses falling on hard times, OJ worries that their family legacy might soon disappear altogether. Em, who was sidelined from the business by her father, would just as soon sell the ranch to finance a more glamorous career as an actor or director. OJ and Em have opposite temperaments, but they both want to leave a mark on the world, to have something that can’t be taken from them. Their golden opportunity arrives when they discover evidence that an unidentified flying object is hiding in the skies above their property, scooping up their horses one by one. Em and OJ make it their mission to capture the UFO on film, securing a place in history as the people who proved the existence of alien life.

With Nope, Peele aims to make viewers afraid of the sky the way Jaws made us scared of the ocean. Horror thrives when it twists the everyday into something ominous, and Nope may have you scanning the skies for suspiciously still clouds. Peele is terrific at building and paying off suspense, and when he aims to scare you, you will be scared. But, also like Jaws, the scares come surprisingly far apart, with long periods of relative calm during which the characters can chat, scheme, and generally goof off. In Nope, however, the action is even more backloaded, and the story drags its feet for the first hour.

This problem may actually be a side-effect of one of the film’s greatest strengths; Kaluuya and Palmer make such excellent first impressions as OJ and Em that the time spent with them before the UFO hunt kicks into gear almost feels unnecessary. Their sibling dynamic is established perfectly within the first ten minutes, and the rest is gravy. OJ is the eldest, the son entrusted with the exhausting labor of sustaining the family business. This burden has drained him physically and emotionally, and he does most of the work alone. Em has all of the charisma and people skills that OJ is missing and the two of them should make a perfect team, but she feels no obligation to the business because their father never chose to invest in her. She fends for herself because she’s always had to. The UFO video is a project in which they can share ownership and that will require both their skill sets, allowing them to learn a better appreciation for each other. Though both actors crush it individually and share terrific comedic chemistry, this character journey feels more scripted than interesting.

Brandon Perea (The OA) isn’t much help as the awkward and loquacious Angel, an electronics store employee who insinuates himself into the Haywoods’ plans after selling them some new security cameras. Angel is a nothing character, good for a laugh or two but mostly a distraction from Em, who has precious little to do in the film’s second act. The team is rounded out by mysterious cinematographer Antlers Holst, portrayed by the intense and gravelly-voiced Michael Wincott. Wincott is a scream as the filmmaking equivalent of a grizzled old gunslinger, and Holst embodies the dream of capturing “the impossible shot,” something that’s central to the film’s theme. But the character ends up feeling ancillary, and consequently so does the idea he represents.

Nope is very much about showbiz and the appeal of spectacle. What makes something novel to look at? Who gets to look, and who gets paid for the opportunity? What happens when what you want to see doesn’t want to be seen? These questions are baked into the entire film, but are best encapsulated in a subplot centered around the Haywood’s neighbor, former child star and current dude ranch owner Ricky (Steven Yuen). His corner of the movie also contains its most visceral and haunting images, and it’s where Peele finds the perfect blend of eerie and absurd. Ricky’s story is fascinating and deserves to be approached without warning or context, and I dare not spoil any of it here.

Nope is a spectacle in itself, of course, shot for IMAX by cinematographer and frequent Chris Nolan collaborator Hoyte Van Hoytema. Peele and Van Hoytema lend an epic scale to the film’s rural setting, lovingly framing Daniel Kaluuya as a heroic cowboy whose foe is the entire sky. But, it’s actually the sound, not the visuals, that benefit most from the theatrical experience. The film’s flying saucer antagonist is creepy in its smooth simplicity, but it sounds much scarier than it looks, partly through sheer force of loudness. On top of the sound design and mixing by Johnnie Burn, José Antonio García and company, Nope owes its aural atmosphere to composer Michael Abels, who provides chilling horror movie thumps and whirs as well as an epic Western hero theme.

Beneath the shock and awe of its sci-fi/horror/western spectacle, Nope is a pretty cerebral experience. Like Peele’s previous film, Us, Nope is a bit challenging — not in a superficial, “puzzle box” sort of way, but in the deeper way that an art house film can be. Peele may have courted the impression that he’s his generation’s Rod Serling, but he’s not going to step in front of the camera at the end of the film and drill home its message in a thirty-second soliloquy. On the whole, of course, I prefer when a storyteller treats me like a grown-up and lets me interpret their work for myself, but I have to admit that I’m only 90% confident that I get it. I look forward to discussing it, but I didn’t enjoy it enough to see it again, in part due to my determination to decode the entire product in real time. My advice for watching Nope is not to repeat my mistake and just to let yourself have fun. Enjoy the spectacle while it’s before you; You’ll have plenty of time to think about it after it’s over. 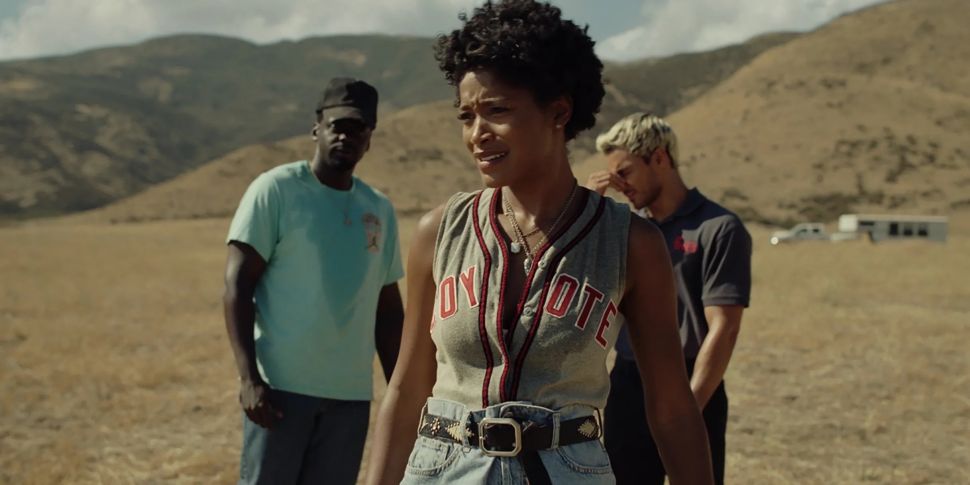