Adapting novels for the stage is a noble endeavor; a healthy culture should be eager to translate its new (or classic) narratives into other media. I’ve seen revelatory theatrical versions of Dostoyevsky’s Demons (twice), Fitzgerald’s The Great Gatsby (verbatim in the marathon masterpiece by Elevator Repair Service) and others—many at New YorkTheatre Workshop. While popular fiction generally gravitates to movies or streaming series, there is an argument to be made for transforming novels into live performance. The Kite Runner, long on talking and short on showing, does not make that argument very strongly.

Familiar to the public as a bestselling 2003 novel and a 2007 movie adaptation, Khaled Hosseini’s tearjerker fable begins in Afghanistan in the 1970s and ends sometime after in America circa September 11, 2001. It traces one boy’s tragic betrayal of his friend and the narrator’s redemption decades later. Amir (Amir Arison) is the son (I won’t say “only”) of a prosperous widower merchant Baba (Faran Tahir) in Kabul. Their longtime family servants are Ali (Evan Zes) and his obedient son, Hassan (Eric Sirakian). Amir and Hassan develop a close bond, playing together, climbing poplar trees and reading stories. Along the way we learn that more than class that separates the two. Amir is Pashtun, the historically dominant and Sunni Muslim ethnic group in Afghanistan, while Hassan is Hazara, of Islam’s Shi’a branch.

The innocent camaraderie between master and servant comes under the hateful scrutiny of Assef (Amir Malaklou), a Pashtun teen who taunts and bullies the boys and, eventually, sexually assaults Hassan—an act which Amir witnesses in hiding but does nothing to stop. That’s the story’s primal, central wound—which the rest of the narrative spins around as our guilt-ridden narrator fumbles toward forgiveness. History pushes the story along in the form of the 1979 Soviet invasion, which drives Amir and his father to immigrant status in San Francisco. Baba goes from wealth and privilege to working at a gas station. Amir follows his dream of being a writer, goes to college, falls in love with fellow immigrant Soraya (Azita Ghanizada) and, finally, returns to Afghanistan to face his past and atone for his betrayal of Hassan.

If that sounds like an insupportable mass of story for two and a half hours, it doesn’t have to be. Any play distilled from a 400-page book invites narrative fatigue. But the clever playwright knows how to condense, find the form dictated by content. A traditional dramaturgy of naturalistic scenes unfolding over decades, with a dusting of memory-play narration—à la The Glass Menagerie—would have been one viable option. The Inheritance of a couple of seasons ago had a far less compelling tale that it dragged out over two full-length plays. Film often does such epic storytelling better. Another tactic is severe but often potent: boiling the source down to multi-character solo performance, a virtuoso act of invocation, embodiment, and exorcism.

Instead, adapter Matthew Spangler settles for a hybrid, unsatisfying solution. His script is a lengthy monologue (skillfully navigated by Arison) nested inside a series of dramatic sketches performed, story-theater–style, by an ensemble that juggles roles around the protagonist on a minimal, modular stage. This approach has the advantage of seeming theatrical, and the disadvantage of underscoring the novel’s melodramatic, often heavy-handed prose. “It rarely rained in the summer in Kabul,” Amir tells us (lifted from the book). “But it rained the night Baba took Ali and Hassan to the bus station.” This hackneyed device often crops up in novels and movies: raindrops cue sadness. Are we surprised when Baba cries seconds later? Elsewhere Spangler’s narration for Amir underscores themes or emotional states obvious in context. “I could feel her emptiness, as if a living breathing thing had crept into our marriage,” Amir annotates Soraya’s inability to conceive a child (again copied from the source). Fiction readers may swallow such signposting, but on the stage, thematic hand holding grates, especially in the longer and overstuffed second act.

And then there’s the cartoonish gay panic that drives Hossein’s dramatic engine. Assef, the crypto-queer sadist who rapes Hassan and then, after he has joined the Taliban, buys Hassan’s orphaned son to be his plaything, is the novel’s principal villain, an Islamofascist perv who serves mainly to polish the narrator’s strained heroism by contrast. Neither Hassan nor his tormentor are developed into anything resembling a rich or complicated character; they are props for our hero’s agonized journey to self-forgiveness.

Director Giles Croft and a talented ensemble of Middle Eastern actors work valiantly to keep our attention even as the script sags in the second half. Amir Arison, tall, broad-shouldered, bursting with charm, anchors the action with grace and humor. Dariush Kashani is a wonderful vocal chameleon, shifting from Afghan to American accents with great elan. As Amir’s bullheaded father, Tahir crafts a dignified portrait of angry masculinity that evolves into wisdom and sweetness. Ghanizada provides a welcome woman’s voice as Amir’s level-headed wife, who has run from her own demons.

Theatergoers will learn a little, as I did, about kite fighting. As a kid I always viewed kites as something to enjoy, not enter into combat. But boys will be boys. The title refers to Hassan’s uncanny aptitude for guessing where a cut kite will fall, to be grabbed as a prize. I wish The Kite Runner were just such a precious trophy. Although it’s welcome on Broadway for giving actors of Middle Eastern descent jobs, and illuminating a non-Western milieu, I’m afraid in the end it’s too much wind and not enough string. 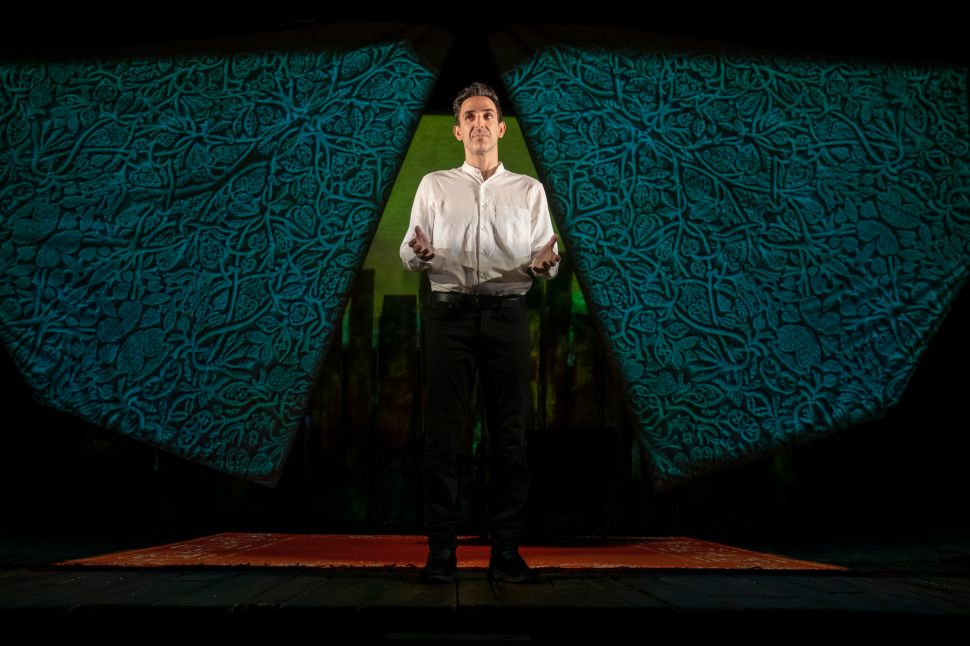