How many ways are there to describe a middle-aged woman? MILF, maiden, lady, perhaps muse. Cool aunt has become a stand-in for middle-aged women with taste. Older women have less kind names. Hag, witch, old maid, wench. At Hauser & Wirth, everyone’s cool aunt Cindy Sherman is currently displaying her hypnotic self-portraiture. “Cindy Sherman: 1977-1982,” is on view through July 29 before moving to Los Angeles in October. The Film Stills occupy one claustrophobic room. Elsewhere the large Centerfolds loom, asking us what we’re looking for. Are we looking for feminist praxis? Are we asking for the masochistic woman we subconsciously long for?

Well-behaved aunts rarely make history. Cindy Sherman has though. Nearly every review Cindy Sherman receives mentions her sweet nature, her appearance, and her ex-boyfriends. Let us count the ways. Calvin Tomkins in the New Yorker: “Sherman herself is slim, casual, and unaggressive. Her hair these days is short and blond… Her makeup is minimal.” Simon Hattenstone in the Guardian: “Here was a girl who sure liked to dress up.” Carol Vogel in the New York Times: “A girl’s girl.” Sherman is well-mannered they say, while probing her about her father and famous lovers like David Byrne and Richard Prince. Her anger, the myth goes, came out in her work. Daddy issues presented themselves in her lovers, their absence and power-lust turned the wheel of her creativity.

At some point in the 2010s good feminist artists stopped public affairs with men and turned to self-help and transformative anger. Once the new millennium hit, Cindy Sherman began replicating famous artworks and crafting fading Upper East Side women. Sherman was brief when she pivoted once again to Instagram, ever the karmic chameleon: “Cindy prefers not to comment on her Instagram posts.”

Sherman refuses to title her work. Instead informal names have been supplied by critics. Film Stills, Sex Scenes, Centerfolds, Fairy Tales, Clowns. Sherman’s portraiture draws on the blank nature of identity. It’s always the same jack of all trades, stealing new faces for the crowd. The Film Stills and Centerfolds offer laconic women waiting in stairwells, beds, and on highways. The implication is that men are waiting. Men are always waiting–in doorways, in cars, on the other side of the kitchen. In her later work, Sherman sparked violence, posing mannequins in delirious sexual positions, donning troll-like masks, and rolling down obscure dreamy backdrops. “I’m good at using my face as a canvas,” she says. Blank. The best actress is a boring woman, a woman who can be used up.

Of course, her acting career was not always so innovative. In an early series of photographs from 1976, Sherman wore blackface. Margo Jefferson, whose titanic Constructing a Nervous System came out this past May, covered Sherman in 2005 for the New York Times “…the blacks are all exactly the same color, the color of traditional blackface makeup. They all have nearly the same features, too, while Ms. Sherman is able to give the white characters she impersonates a real range of skin tones and facial features. This didn’t look like irony to me. It looked like a stale visual myth that was still in good working order.”

The delineation of feminist art, as opposed to art by women, bristles with the burden Cindy Sherman must carry. Her work was contemporaneous with Judy Chicago. (The Dinner Party dates 1974-1979.) The Film Stills are lauded both for bringing photography into the realm of fine art and for giving feminists a mainstream victory. Sherman is less convinced by feminism as a label for her work. She once joked, “See, I have breasts everywhere. I collect breasts… The work is what it is and hopefully it’s seen as feminist work, or feminist-advised work, but I’m not going to go around espousing theoretical bullshit about feminist stuff.”

In one of the Centerfold images, the subject draws black sheets close to her face. Many have inferred this image is a depiction of rape. Nearly all of the Centerfolds involve a bed. Meanwhile, the Film Stills have Sherman laid out but also include action shots. In one she’s scuba diving, in another she is hitchhiking on a pine-covered mountain. Poor thing. But at least she’s moving. In the Centerfolds, described by so many as unnerving, she is always looking at us or in apprehension of something off-camera. In one Centerfold she grasps a ticket while laying on the tile floor. She is wearing an orange carrot top sweater and orange checkered skirt with her arms twisted like a carnival pretzel. Lips quiver on a ruddy face with short cropped hair. We can see skin above her knee. This is not a girl who is doing well. This is not a good girl. This is a girl who’s daring us to lift her skirt just a little higher, to pose her arms behind her back. She’s asking how you like your women.

The Film Stills conjure Brigitte Bardot, Sophia Loren, Hitchcock, and Italian Neorealism. They are tiny, stark, black and white film stills featuring Sherman in varying degrees of distress. In her introduction to the Complete Untitled Film Stills, she writes “Everyone in the art world wore black then—absolutely everyone, especially since punk was so in. It was weird. I didn’t want to blend into the art world so I wore my vintage ski pants and little ‘50s fur-trimmed rubbers over my low heels.” This theatricality echoes the interviews in which she recalls dressing up as characters for openings and parties. The stills are never ordered the same. Her characters—fading film stars, blonds, escaped mental patients, and budding starlets–vie for their share of glamor. They are, to summon a banal word, iconic. They are imprints endlessly repeated, like Warhol, like soup cans, like women waiting for violence.

When people used to joke about Lana Del Rey being ironic, this is what they referred to—women portraying women waiting under the bridge of violence. Sherman is in on it. Lana Del Rey, who recently dated a cop, is not. When artists waver on feminism, older generations hear room for the ambiguity of power dynamics, younger artists hear a dog whistle for young women to behave without politics. Room for women to behave not just badly but without self-awareness, doomed to repeat the ancient relic of patriarchal puppetry. Lana Del Rey, younger generations say, does not know what she is really asking for. Cindy Sherman is playing with fire and asks men to linger with their guilt. Feminism, Sherman suggests, should be a given.

The question is do we believe that images of supine women somehow subvert men? Do they need to? These questions will outlive Cindy Sherman. I can lay on my back and tell you to whip me, wear heels for my top, toy with lovers, but who, at the end of the day, gets the pleasure of viewership? It depends. Men aren’t the only ones heading uptown to Hauser & Wirth. In fact, during my hours at the gallery I only saw other women, all of us wearing our little black dresses. The blank mythic woman suffering in her New York camouflage walks down Fifth Avenue. 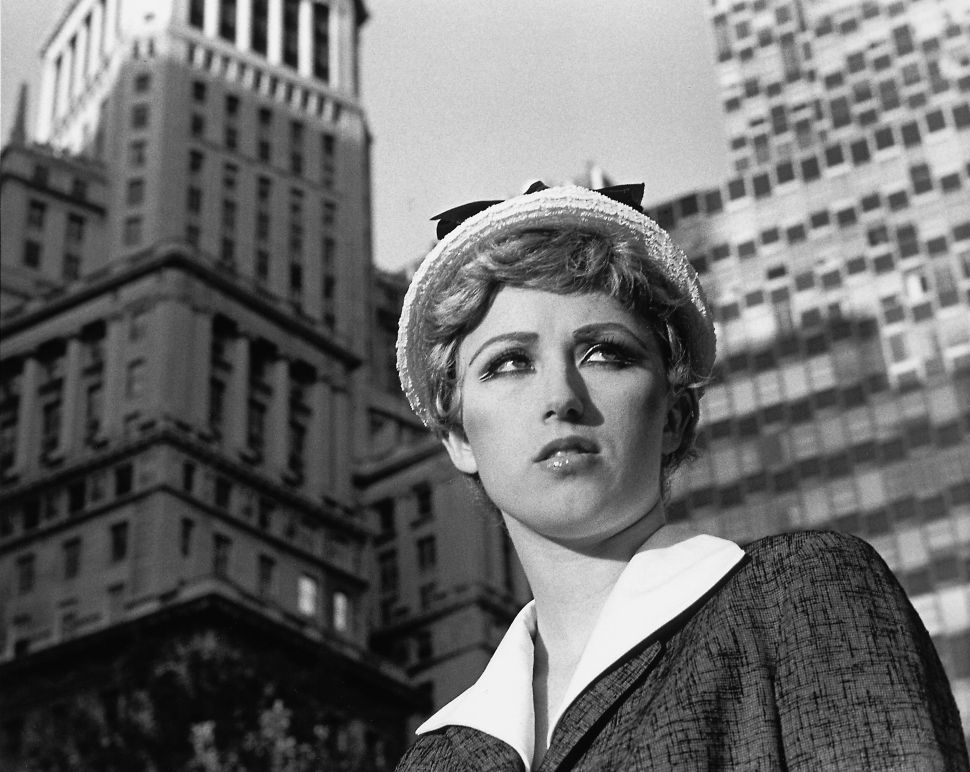