Decades of Tudor propaganda (by Sir Thomas More and official chroniclers such as Raphael Holinshed) furnished the ready-made image of a scheming “crookback” for Shakespeare’s fertile imagination a century after King Richard III’s death on Bosworth Field. Thanks to the drama that bears his name, the monarch is best known as “that bottled spider, that foul bunch-backed toad.”

Actress Danai Gurira makes a juicy meal of the title role—a gender-blurring, chaotic-evil goblin poured into black leather—but she’s surrounded by an uninspired ensemble in a production that lacks a strong concept or point of view—apart from addressing the ableism inherent in the material.

Infamously, the character of Richard rests on a simplistic connection between his silhouette and his villainy. “But I, that am not shaped for sportive tricks,” he tells us in his opening soliloquy, “Nor made to court an amorous looking glass; / I, that am rudely stamped and want love’s majesty / To strut before a wanton ambling nymph…” and so on, by way of explaining that since he cannot be a hunk, he’ll be a bad guy. Director Robert O’Hara flips the script: Gurira’s Richard has no outward deformity, just a twisted personality. If anything, she’s an action hero (as anyone who has seen her in The Walking Dead or Black Panther can attest).

To drive the point further, O’Hara casts several roles with an eye to diversity of physique, such as the vivacious Ali Stroker (Oklahoma!) as Lady Anne, whom Richard courts over her wheelchair and the body of her father-in-law, whom he murdered. Matthew August Jeffers, a little person, plays multiple roles with breezy élan, including a smug, prince-killing Tyrrell who prefers the emphasis on the second syllable (teh-RELL). Gregg Mozgala, who has cerebral palsy, lends inherent valor and a mellifluous voice to a pair of royal roles: the remorseful, dying King Edward IV and later, the usurping Richmond who will replace Richard on the English throne. Deaf cast members Maleni Chaitoo and Monique Holt incorporate ASL into the performance, most of which is translated for the audience.

Although these casting and textual choices are welcome in a classic that demonizes disability, there are problems with the production, namely slack pacing and tonal wobbliness between the formal rigor of the verse and O’Hara’s obvious desire to camp up aspects of the narrative. Sharon Washington (Lady Anne from Shakespeare in the Park’s last Richard III, in 1990) cuts a dignified, imperious figure, but you’d hardly know the hell she’s been through and the family she’s lost. As Elizabeth, a queenly arriviste whose fortunes turn, Heather Alicia Simms seems to have wandered in from a sitcom. A comically awkward presentation of Lord Hastings’ head on a platter provides grisly slapstick, hinting at the sort of satire that O’Hara might have added to leaven the long two hours and forty minutes. But too often he plays it safe, and scenes sag under a sense of dutifulness and caution.

It’s a pity, because although Richard III has plenty of luscious speeches (Clarence’s dream of drowning, Richard’s gleeful asides to the audience, Margaret’s curses) as a drama, it’s much more stilted and formulaic than Shakespeare’s later “Henriad.” I wouldn’t have minded seeing a Richard III that was boldly modernized, Americanized, or turned into a nihilistic political cartoon about the mendacity and violence of politics. Instead, scenic designer Myung Hee Cho presents a forest of steel-mesh Gothic arches, a nod to the story’s late-medieval period, matched by fairytale outfits courtesy of Dede Ayite (with neat touches such as golden sneakers for the young princes). Such retro choices are not unpleasant, but smack of an absence of vision.

At least Gurira grabs your attention every second she’s on stage. Rocking a close-cropped hairdo with a zig-zag fade, Gurira looks every inch a treacherous Dick who will hack his way to the throne, lying to a brother’s face one second and gleefully grinning at the audience the next. Adopting a transatlantic accent to grease the wheels of the rhetoric, Gurira delivers a commanding and musical performance of the verse (exploiting her higher register), showing Richard’s descent from cocky plotter to frothing paranoiac. Her agonized rendition of his post-dream soliloquy the night before the battle of Bosworth Field is exceptionally touching, a glimpse of the scared, traumatized child under the beetle’s shell. I only wish the production around Gurira rose to the heights of her lusty, mercurial heat. To be honest, nine times out of ten the principal reason to see Richard III is the Richard. That’s why I waited with a friend one afternoon in Central Park in 1990: to watch the stone-cold Denzel Washington in a staging I can’t recall. You always remember the villain. The rest fades into history. 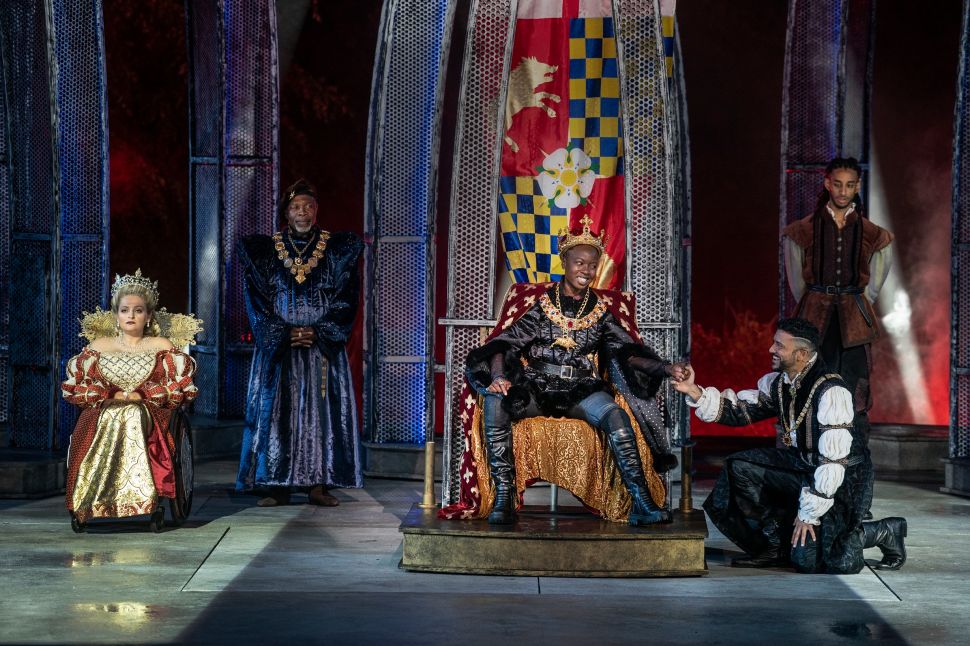