Covid fiction has arrived. Similar to apocalypse narratives, it’s quickly becoming a trope employed by contemporary authors to raise the stakes. It’s a difficult thing to pull off and I’m not always convinced people can do it well–it can make for lazy writing about connection. How well will these pieces of writing hold up in the years to come?

Dog Biscuits (Fantagraphics, June 21) is Alex Graham’s biggest graphic novel to date. Originally released on Instagram in six panel segments, “episodes” she calls them in the introduction from June 2020 to January 2021. Alex Graham has been steadily rising online in part thanks to her work alongside comics legend Simon Hanselmann. Hanselmann released a pandemic comic of his own–Crisis Zone, which was serialized and released on almost the same timeline. Alex Graham’s comic is less of a stoner sitcom and more of a coming of age tale.

Graham’s been steadily increasing her internet presence, painting rabbit vaginas and demons with equal joy. Based in Seattle, Dog Biscuits is a take on summer 2020– masks, the Discourse, protests, and sex. Rosie is an employee at a dog biscuit boutique struggling to stay afloat amid economic precarity, police brutality, and a desperate love triangle. She’s in love with her boss, a dog named Gussy, but also with her frog roommate Hissy–whose mother is Jeniffer Love-Hewitt. Miley Cyrus and Grimace also make their own roaring celebrity cameos.

Rosie falters when it comes to instant gratification. She wants to feel desired every second of every day. Relatable. She stalks one of Gussy’s exes online only to feel that: “Social media is poison. Truly one of the worst things to ever happen to civilization.” The isolation the characters face due to the pandemic only heightens their eviscerating attachments to each other. Characters are constantly negotiating Covid bubbles, Covid dating, and Covid mental health crises. One character tries to convince the others to have a party despite CDC guidelines. When the characters interrogate their interiority, the narrative feels animated. “How many people are you seeing?” they ask each other.

I thought about all the walking dates I went on. For a time, it seemed everyone I met was a newly arrived transplant to New York. It was impossible to tell them how incredibly traumatizing it was to live next to a highway and hear sirens all day and all night. How people were leaving the City without notice left and right. How we thought, for a time, it was the end.

Gussy and Hissy are constantly discussing their male privilege without fully considering the implications of their words. They are constantly asking Rosie what she wants while also failing to reckon with how larger social structures are playing out around them. In the afterword, Graham notes how much hate was heaped on her two male leads. It’s true that they are the archetypal “good guys” who still perpetuate patriarchy, but they’re also men trying to understand how their feelings are spilling out around them. Gussy in particular has a sweet redemptive arch. There’s something endearing about watching people who royally mess up try to rebuild their lives. Gussy receives the sweetest sending off. After turning to prescription drugs and road rage, he starts painting again after a long hiatus. The novel’s ending frames him as the protagonist, even if Rosie feels like the emotional center of the work. Rosie, for her own part, is wondering when “girlbossing” is just an excuse for bad behavior. Her friend encourages her to not care about the men in her life–but Rosie knows it’s a bit more complicated than that. Just because she is empowered doesn’t mean she can’t also cause harm. This dynamic is one of the more interesting threads Graham follows.

Graham’s take on police brutality is a little more ambiguous. Certainly, Graham condemns the cops, painting them as sadistic crazed meth-heads raiding CHOP/CHAZ, the autonomous zone that sprouted during the Black Lives Matter protests in Seattle. Graham has said in interviews it would’ve felt disingenuous not to include discussion of police corruption. One of the characters, a frog, is brutalized after a police raid. Another character, after having his gaming station destroyed by cops, asks if it would be in poor taste to start a GoFundMe for a new one. The ethical dilemmas that many white people flirted with in summer 2020 are on full display here. These characters, presumably all of whom are white, reckon with their privilege, guilt, and evasive tendencies. What is the narrative value of white guilt? How much one can stomach this hand-wringing will greatly affect one’s enjoyment of the work.

The book contains a variety of metatextual references, the name of the work came from a Charles Bukowski book Graham was reading during the pandemic. The book eventually finds its way into the Dog Biscuits universe. One character is a painter whose work is in fact a work by Graham, as evidenced by a Brechtian photo at the end of the book. Graham is an exquisite painter whose work hinges on the weird and unruly bleeding into a quasi-Disney aesthetic. If Minnie Mouse had a pussy, she would be a less hot version of Rosie. The visual vocabulary established by Graham for the comic is rough but incredibly tender and well built. It will be familiar to many who enjoy webcomics on Instagram, the quick drawings paired with complex emotional dilemmas and drug use. It’s endearing to see sex scenes drawn so lewdly with such feeling. The cover painting for the Fantagraphics hardback is stunning, Graham’s cotton-candy color palette drawing us in as it shows a lone mask dangling from Rosie’s ear.

This is ultimately a pandemic story about love, guilt, and forgiveness in zany technicolor glory. These are characters who have antics, they’re up to something. I still wonder about the value of writing pandemic narratives, but I enjoyed living in Graham’s world. She sticks the landing with a moving, thought-provoking ending. As cartoonists question the point of making art in a postmodern world, Graham shows that personal narrative still holds as a way to chart the complex emotional geography of being alive. 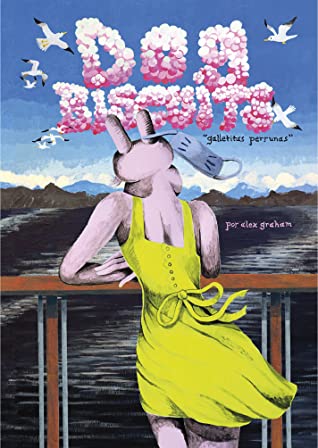