Fairy tales can be dangerous. People cling desperately to hoary myths about the golden age, rampant monsters, and magically enhanced princes who alone will save the realm. When children are spoon-fed superstitious lies generation after generation, a whole country can run amok, stockpiling pitchforks and torches. But hey: enough about the evening news.

Let’s turn instead to the enthralling and glorious revival of Stephen Sondheim and James Lapine’s Into the Woods, a bewitching elixir of musical lushness and sophisticated wit that has lost none of its beauty or charm in the 35 years since it opened on Broadway. Children will listen, Sondheim tells us (yes, they have to be carefully taught). And yet, forget the tots; it’s adults who should lean in and learn to reconsider wishes. Into the Woods is a blissful contradiction: musical fantasy that puts us back in touch with reality.

Recent revivals of Sondheim’s Assassins (1990) and Company (1970) have reminded us that conspiracy-fueled political violence and monogamous misery remain all-too relevant, while also proving that the late, great composer-lyricist (who died last November) is not about to fade away. Into the Woods, one of his most commercial and playful works, returns to Broadway at a time when audiences are sorely in need of joy, in a country whose foundational fairy tales are being weaponized against the most vulnerable segments of the population. (Embryos are sacred! Immigrants are evil!) If there’s a moral to Woods—and Sondheim and Lapine avoid a tidy one—it’s that we need to forgive, accept our imperfections, and live together without blame. In other words, we need to grow up—without forgetting the child we were.

In the best of productions, the show coaxes you into a dual adult and child mindset. Sondheim’s sprightly musical hooks (variations on children’s nursery rhymes) and gorgeous swooping melodies (his most operetta-ish since Sweeney Todd) enchant young and old; the iconic tales of Little Red Ridinghood (Julia Lester), Jack the Giant Killer (Cole Thompson), Cinderella (Phillipa Soo) and Rapunzel (Alysia Velez) spark kindergarten nostalgia, while the modern filter spins them into laughs. “It’s the Witch from next door,” sighs a put-upon Baker (Brian D’Arcy James) to his wife (Sara Bareilles), sounding like a Park Slope couple dealing with the nosy president of the co-op. This childless, working-class couple and the sadistic Witch (Patina Miller) are innovations by Sondheim and Lapine. Goaded by the Witch, the Baker and his wife set out on a quest to lift their curse of barrenness, a journey that strings together the fairy tales in a deliciously convoluted plot. The beleaguered couple also provides the emotional ballast that carries the story from the first act’s satirical whimsy into the tragedy and ethical murk of the second half—after everyone gets their wishes, but not happiness.

Director Lear DeBessonet’s spare, semi-concert production began life in May in the Encores! series at New York City Center. I was sad to miss that two-week run but, given the casting changes that occurred for Broadway, count myself lucky.

Even if this isn’t a $25-million dollar Into the Woods with a revolving stage, a flying Witch, a 30-piece band, and a Giantess on loan from Global Creatures (one dreams), it has something infinitely richer: a stupendous cast. Unlike 2002’s underwhelming first Broadway revival (directed by Lapine), which felt like the bus-and-truck tour, this one could only happen in New York. It comes closest to capturing the glamor and assurance of the indelible original cast, which included Bernadette Peters, Chip Zien, Joanna Gleason, and Robert Westenberg.

Two original cast members from Hamilton add heft to the current dream ensemble: D’Arcy James brings his burnished tenor and everyman charm to the timorous but big-hearted Baker, and Soo’s Cinderella couldn’t be a more appealing mix of gorgeous singing and neurotic, single-lady humor. Joshua Henry, the saturnine dynamo of Carousel and The Scottsboro Boys, reveals big comic chops as a sweetly doltish Prince infatuated with Rapunzel. As the Witch, Miller transforms from bullying troll into muscular goddess, outsourcing the ingredients of a potion that restores her youth but drains her magic. Miller’s glittery, velvety soprano wrings every drop of sorrow and anger from the maternal lament “Stay with Me” and the splenetic, waltz-timed “Last Midnight.” Two holdovers from the City Center cast—Gavin Creel as Cinderella’s smug himbo Prince, and Cole Thompson as a man-child Jack—add invaluable luster and laughs. Gnomishly droll, David Patrick Kelly does double duty as the Narrator and Mysterious Man.

Even in an ensemble so crammed with MVPs, let’s make a clearing in the forest for our shrine to Sara Bareilles. The beauteous pop star and immensely gifted composer-lyricist (Waitress) makes the Baker’s Wife her own with silky grace and sly wit. A practical, spunky, good-humored woman whose ebullience can lapse into rue over life’s limitations, she (give her a name, guys!) fits Bareilles perfectly, and lord, does she hit those honeyed notes and tricky, cogitating lyrics. From the punning patter of “Maybe They’re Magic,” to the cozy duet “It Takes Two” and the anti-romantic heartbreaker “Moments in the Woods,” Bareilles sails through Sondheim’s score like it was written for her. When the Baker’s Wife (SPOILER) is senselessly crushed by the Giant (Annie Golden, bless her), your shock at losing the wisest, most sympathetic character is matched by awe at the creators’ bravery in putting life’s tragedy center stage.

Since the (relatively generous) 15-piece orchestra led by Rob Berman is situated on the stage, DeBessonet maximizes the downstage and areas around the band to conjure up a whirling storybook world that cuts cinematically between stories. She succeeds admirably through economy of movement and concentrating our attention on the things that matter most: character and song. There’s a hip, winking spin on the book that suits a modern audience. Little Red has a seen-it-all Gen Z irreverence; Creel’s Wolf camps it up with manic abandon; and there are inspired meta-puppetry gags around Jack’s moribund cow, Milky White (designed by James Ortiz and deftly operated by Cameron Johnson). Scenic designer David Rockwell furnishes elegant birch trees descending from the flies; and choreographer Lorin Latarro gets the group crouching, skipping, twirling and tiptoeing through those shadowy, twisty woods.

This gigantic gift of a revival is scheduled through the end of August, but something tells me it will, magic beanstalk–like, extend. It ought to run for years, the better to serve as a gateway musical for a generation of younger viewers. Judging by the waves of screaming and applause that greeted every character entrance, and which followed every number, people who encountered Into the Woods as young adults are already flocking to the St. James Theatre to unite their inner child with their outer show queen. I’m right there with them. A Sondheim revival with vocally superior, perfectly cast performers, intelligent direction and design, and a sizable orchestra? Sometimes wishes do come true. 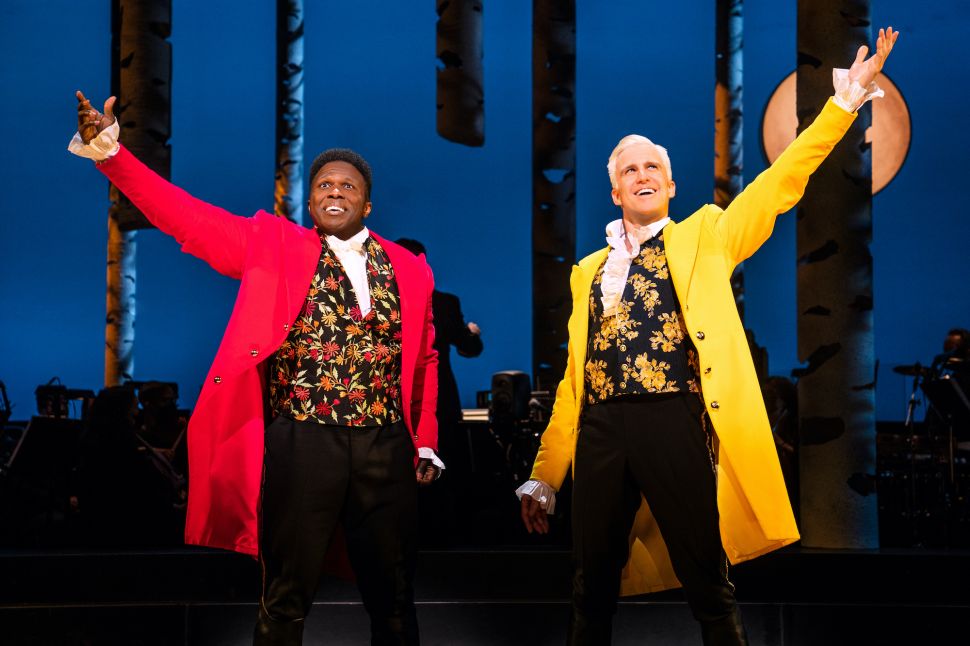