When the nation’s most powerful judges clutch the Bible in one hand and a crumbling Constitution in another, theater folk reach for the Greeks. Aeschylus’ harrowing trilogy Oresteia may not discuss abortion rights, gun ownership, or climate change, but it has plenty to say about child sacrifice, honor killing, and the fickle gods’ control of nature. Above all, it contemplates justice—the agony of it, the arbitrariness of it. In times of civic crisis, we don’t re-stage the Greeks looking for moral excuses to exercise power. We do it, as British writer-director Robert Icke boldly does at Park Avenue Armory, to pose the tragic query: “What should I do?”

Here’s where I answer, Go see it! or, Run far from it! In truth, I feel tragically torn about this supersized serving of Event Theater, which comes to New York trailing banners of praise from its 2015 runs at the Almeida Theatre and the West End. At three and a half hours (which fairly fly by), Icke’s chilly, modern Oresteia is not without self-regarding passages of overwritten prose or callow pop gestures (repeated snatches of the Beach Boys’ “God Only Knows”). Some forensic touches, such as projecting the real time of each character’s demise (“Iphigenia. Time of Death: 20:05:12”) are borrowed from Continental art-stars such as Ivo van Hove. And I’m not even sure the Armory is the right venue: it dwarfs the intimate domestic horrors of the material while foregrounding Icke’s design-heavy auteur pretensions.

And yet, there’s an insistent, intelligent thrum of showmanship throughout the affair, which is acted supremely well, and builds to a cumulatively powerful excavation of the tragedy: socially, psychologically, and theatrically. First, it is important to acknowledge this as a “translation” only in the loosest sense of the word. It’s a top-to-bottom rewrite of the original; comparing Aeschylus and Icke side by side would be an exercise in futility. Icke cranks out punchy, cutting prose with a zest for ethical dilemma, like a hungry student milk-fed on Pinter and Brenton. Clytemnestra (Anastasia Hille), revels in the animal thrill of murdering Agamemnon (Angus Wright), who sacrificed their child, Iphigenia (Alexis Rae Forlenza), so his ships could sail to Troy. We may find ourselves swayed by the bloodless ratiocination Agamemnon uses to justify the sacrifice: the girl will suffer infamy and worse if they lose the war. Icke transforms Clytemnestra’s famous speech about the string of fire beacons which announce the fall of Troy into a description of the internet. The courtroom drama that wraps up the House of Atreus’ monstrous cycle of murder and retribution blurs the line between psychodrama and bureaucratic brutality.

Unlike his bland and brooding Hamlet (running in rep at the Armory through August 13), Icke is free to make big interpretative changes. He chops out the chorus, adds multimedia effects (live video interviews to emphasize the public and mediated nature of Agamemnon’s household) and underscores murders with a barrage of industrial sound and light (by Natasha Chivers and Tom Gibbons, respectively). Staged mostly on and around a long dinner table before sliding glass doors (designed by Hildegard Bechtler), the physical production is relatively minimal, even if the dramaturgical aims are wildly maximal. Is Cassandra (Hara Yannas), brought home as a spoil of war, Agamemnon’s attempt to replace Iphigenia? Is Electra (Tia Bannon) actually a delusional projection created by Orestes (Luke Treadaway), whose psychotic break is prompted by his mom killing his dad? Did Orestes’ psychoanalyst (Kirsty Rider) really just turn into a lawyer? No human institution goes undissected: the solidity of language, the fairness of law, the sanctity of family.

So, which is it? Visionary reassessment of Western culture’s foundational drama, or Eurochic refurbishing that’s more flash than substance? Both. I believe Icke is engaged in an honest struggle with theatrical heritage (he has also aggressively revised Chekhov, Ibsen, and Schiller), but as a director, his method is to throw everything against the wall—deconstructed text, overwhelming design, metatheatrical devices—to see what sticks. There’s a synthetic impersonality to the whole affair.

Despite it all, the bones of Aeschylus’ primal tragedy remain strong and searing to the end. This production fills a yawning gap. New York theater artists don’t tackle Greek tragedy often enough; it’s viewed as too academic, too rigid, too distant. Oresteia, which won Aeschylus first prize at the City Dionysia festival in 458 BCE, was always meant to be viewed in a single day. The length and density of the original three dramas—Agamemnon, The Libation Bearers, and The Eumenides—deters most producers. Icke, heroically, restores wholeness to the cycle, but to stitch the victim back together, he has to blow her up first. Sometimes the killing hand is the one that loves most. 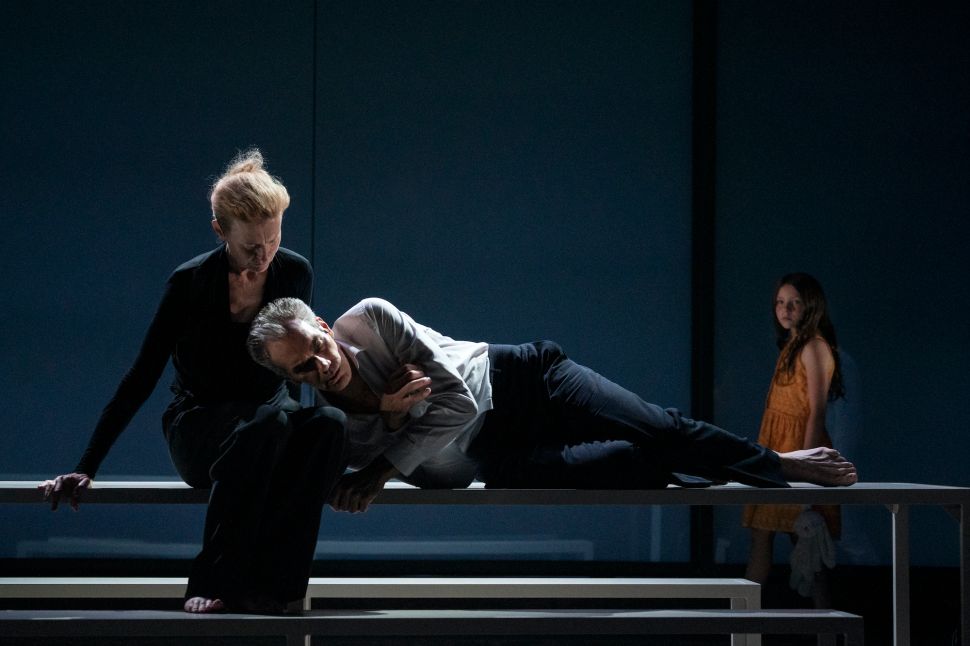