There’s a perverse pleasure in reading another person’s diary. It might be the violation against this writing act itself—diaries are not meant to be read by anyone but the author. Whenever readers do get access to a person’s private diaries, like those of Sylvia Plath or Virginia Woolf, there’s naturally an intoxicating pleasure in pouring over entries that give unguarded, seemingly authentic access to these mythologized people and their inner thoughts. Now a new book, Unmask Alice, explores how so many of us were tricked by a false promise of true tragedy and trauma when reading teen “diary” Go Ask Alice (1971).

For many of us fed as teens Go Ask Alice—marketed as a true and anonymous journal of a wayward 15-year-old girl—the feeling may be the complete opposite. I read Go Ask Alice as an angst-fuelled, acne-ridden teen, revelling in the weird intimacy and clunky prose capturing one girl’s complete capitulation from drug use. I never doubted if it was real or not—the dog-eared library copy adorned with “Anonymous” was all the confirmation I needed—and instead just savored the girl’s wild self-destruction and hidden life neatly kept between her notebook’s fine lines.

Now a decade or so later, I, along with many other former self-hating teens, have since learned the diary was a complete fraud. It’s a fictional work written by a then-idle 53-year-old Mormon housewife, Beatrice Sparks, whose aspirations for greater literary heights saw her exploit teen tragedy and plug a lucrative gap in the publishing market. And it worked spectacularly. Since 1971, Go Ask Alice has been variously cataloged in libraries, bookstores, and across pop culture as a work of nonfiction (since it was sold for years as “A Real Diary”) while remaining in print and on school reading lists too.

Unmask Alice provides a propulsive reckoning on Go Ask Alice and its author’s lifelong obsession with self-mythologizing her own involvement with it. While there’s more widespread knowledge today about Go Ask Alice’s fiction, what makes Emerson’s efforts so compelling is how he neatly peels back the many complex deceptions by Sparks made across her lifetime. These includes fabricating “real” teen depression and suicide across many best-selling books, exploiting various cultural panics about drugs and witchcraft for monetary gain, and even elevating her own stature to that of “leading psychologist” in youth mental health.

For those uninitiated with Go Ask Alice, the book claims to be the “original diary” of a nameless 15-year-old teenage girl who becomes completely undone by drug addiction, which first begins after taking LSD at a party. Alice isn’t her name but rather a nod to Alice in Wonderland and her chaotic adventures. The girl soon abandons her quiet suburban life for a reckless sojourn in San Francisco. There, she experiments with hard drugs, performs sex work, and couch-surfs to feed her habits and simply stay alive. After multiple attempts at rehabilitation, we learn in an epilogue she has died and left these journals as a kind of final warning to other teens.

Go Ask Alice throughout its early history was portrayed as a true diary. Emerson explains how Sparks was the first to create the myth by telling her publisher that she had “assembled” this real (dead) girl’s story from loose sheets that arrived to her “in a paper bag.” Sparks even proposed a title: Buried Alive: The Diary of an Anonymous Teenager, edited by Beatrice Sparks. The original publisher advised against including Sparks’ name for marketing purposes, so she was scrubbed and instead appeared quietly in the copyright information.

Beyond exposing the many signs of the book’s fraud—like factual inconsistencies or believability issues like the girl taking heroin before marijuana—Emerson also maps out a real-life teen tragedy that likely inspired it all. In particular, the high-profile death of young actress, Diane Linkletter, who apparently threw herself off a Los Angeles balcony in an LSD-fuelled craze in 1969. The story made national headlines since her father was TV personality Art Linkletter and soon helped feed into a wider a public conversation on drugs in America, all against the backdrop of the Charles Manson murders. Emerson shows credibly how Sparks likely capitalized on this death and the ensuing cultural paranoia about the dangers of LSD to her own strategic advantage: “Beatrice Sparks had found her moment and she pitched … a simple story with a shocking twist.” It’s soon not hard to see the parallels between the Alice story and this death once Emerson begins to square up the pieces.

This exposé isn’t simply satisfied with bearing Go Ask Alice’s fiction and takes on Sparks and her entire bibliography too. We learn how Sparks made a regular habit of lying about herself as she vied for the public spotlight and “decided to be something else” than a Mormon housewife. Claims include that she graduated in psychology at UCLA (there are no records showing this); she was licensed as a psychologist and regularly treated teen patients (her accreditation is non-existent); she interviewed “thousands” of runaway teens for a book (simply an impossible feat within the timeframe). Throughout her life, the lies kept piling up but Sparks found simply ways to help enshrine them in the public record, such as providing pre-written biographies to journalists or asking her publisher to quietly add “Dr.” to her back jackets.

Beyond her own biography, there are the countless lies underpinning her other “real diary” books, namely the follow-up to Alice, Jay’s Journal (1978). The story behind Jay’s Journal is equally exploitative and alarming, we learn. A grieving mother gave Sparks scraps of a slim journal kept by her recently deceased son so Sparks could similarly consider publishing his writings as a warning on teen mental illness. After she had been scrubbed out of Alice, Sparks capitalized on this new and unexpected opportunity, concocting an outrageous series of journal entries for book sales.

The final product captures the writings of a troubled 16-year-old boy who is pulled into the dark, cultish world of Satanic worship (yes), drug and alcohol abuse, and animal mutilation (yes again). It’s a ridiculous premise today but for late-1970s America on the verge of a decade of “Satanic panic,” it was just right for the zeitgeist. In the book, Sparks bastardized the original (and benign) journal entries of the real troubled boy to score her own sensational sequel covering satanism and self-harm in suburbia. And Jay’s Journal sold very well, thanks in part to Sparks “adding 190 new entries, including all of the violent and occult material” to the original entries. Emerson’s exposé on Jay’s Journal’s anchors much of Unmask Alice, with detailed research and background material validating the con.

Unmask Alice is a noble project that singularly synthesizes the many strange, contradictory, and mostly scattered fictions that surround both Go Ask Alice and Beatrice Sparks herself. Emerson’s writing is smart throughout, with various tricks—including clipped, staccato chapters that come to mirror slim diary entries—keeping readers engaged across an otherwise complex web of deceit, exploitation, and even sad folly that form this wider backstory. While there are times the book sometimes gives too much background (including on 1970s drug culture), it still nevertheless delivers a comprehensive and credible portrait on the rich frauds of “Alice’s creator.” Whether she was making up fake Jewish doctors for book endorsements, or saying she had met the real “Alice at a youth conference” in 1970, Sparks ultimately remained an unseen imposter exploiting young people for opportunistic gain via her books.

As someone who had once connected to Go Ask Alice and its cooked tale of teen self-destruction, reading Unmask Alice proved a comforting, if sobering, adult experience. It might be in the quiet irony of it all: Sparks’ many personal lies finally exposed through fake teenage diaries she authored over her career. For those of us who have ever kept a private diary, we all still know that there may just be a captive audience eager to read your innermost thoughts beyond you. The trick is just not to lie between the covers. 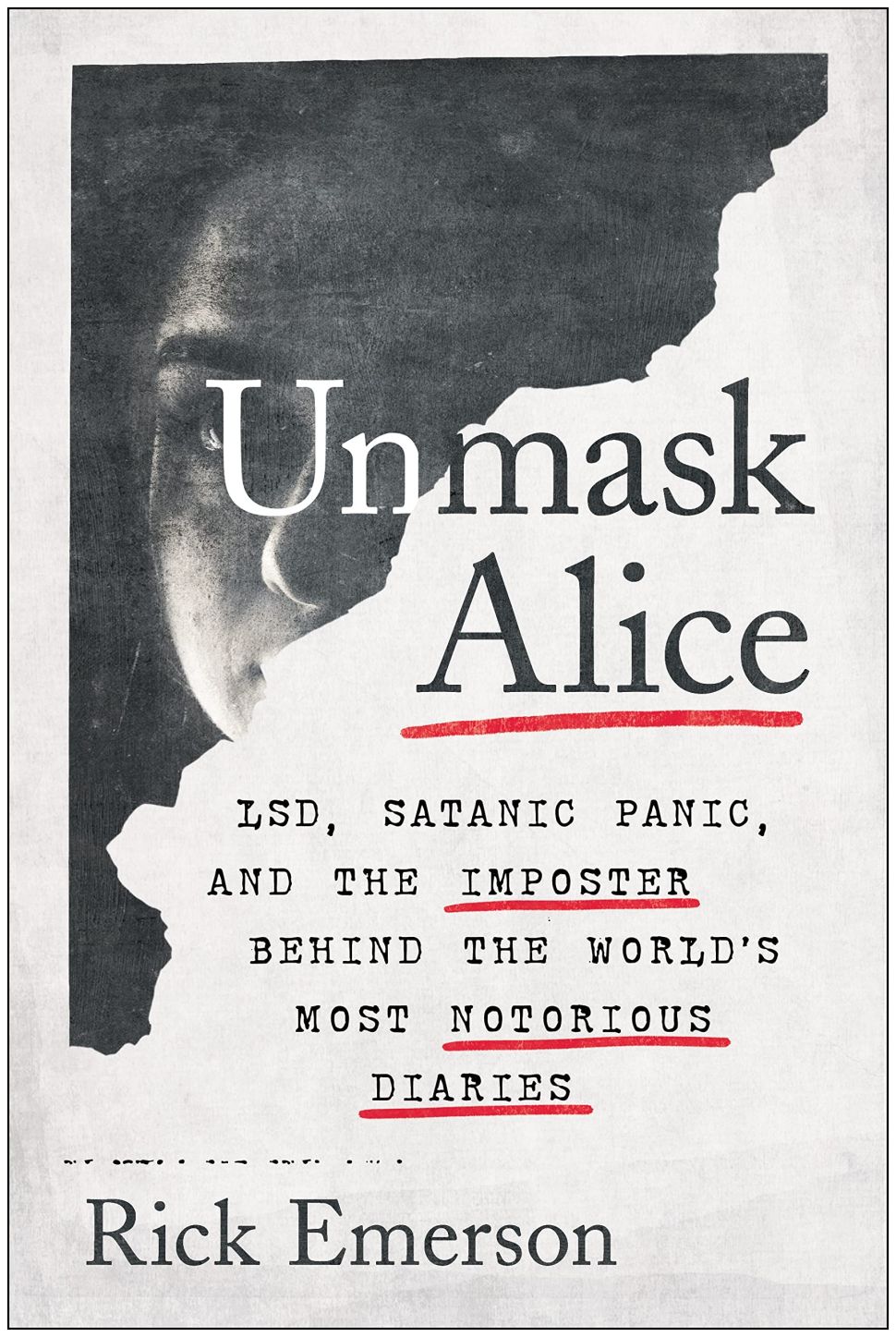