Tesla recently began laying off thousands of employees as part of a company-wide cost cutting ordered by CEO Elon Musk. Many affected by the downsizing are now working for Tesla’s smaller competitors, according to an analysis of employment information of more than 450 former Tesla workers on LinkedIn.

More than 50 people joined Rivian Automotive after leaving Tesla and 34 were snapped up by Lucid Motors, according to the analysis, shared on Reddit on July 11. In addition, more than 100 ex-Tesla employees went on to work for Big Tech companies including Apple, Amazon, Google and Meta. There were also about a dozen who joined autonomous vehicle companies Zoox and Aurora.

Tesla has been losing talent, both voluntarily and involuntarily, in recent weeks. Even before Musk ordered layoffs, there were reports about Tesla workers wanting to quit after Musk ordered all employees to return to office full-time. On social media, experienced tech workers were discouraging job seekers who had multiple offers from working for Musk-run companies.

Tesla recently lost the rank of the world’s largest EV maker by sales volume to Chinese automaker BYD, which is partially owned by Warren Buffett’s Berkshire Hathaway. Covid lockdowns at Tesla’s China factory in April and May, parts shortages and rising competition dented Tesla’s output for the first half of 2022. It will have to make 50 percent more vehicles in the second half of the year to meet its production goal.

Some of these companies are founded by Tesla alumni. Lucid CEO Peter Rawlinson was the chief engineer of Tesla’s Model S sedan early in the vehicle’s development. Sterling Anderson, a cofounder of Aurora, led Tesla’s Autopilot driver-assistant system before starting his own company.

“Lots of fantastic people I worked with were snatched up quickly by competitors,” commented a Reddit user who claims to be an intern at Tesla. “From what I’ve heard it seems automotive is a small world, especially EVs and a lot of the same people get shuffled around.” The Observer wasn’t able to verify the user’s employment information.

Tesla isn’t the only EV maker faced with the pressure to downsize. But its competitors are still investing in core functions, such as manufacturing, and in need of talent in the areas that Tesla deem bloated.

A report surfaced on July 11 that Rivian is planning to cut 5 percent of its 14,000-person workforce. Rivian declined to comment on the report or its recent hiring of former Tesla employees. CEO RJ Scaringe said the company is pausing hiring only for non-manufacturing departments and will prioritize EV development and production departments, according to an internal email sent on July 11 seen by the Observer. Scaringe is expected to hold an all-hands meeting on July 15 to discuss restructuring and potential layoffs. 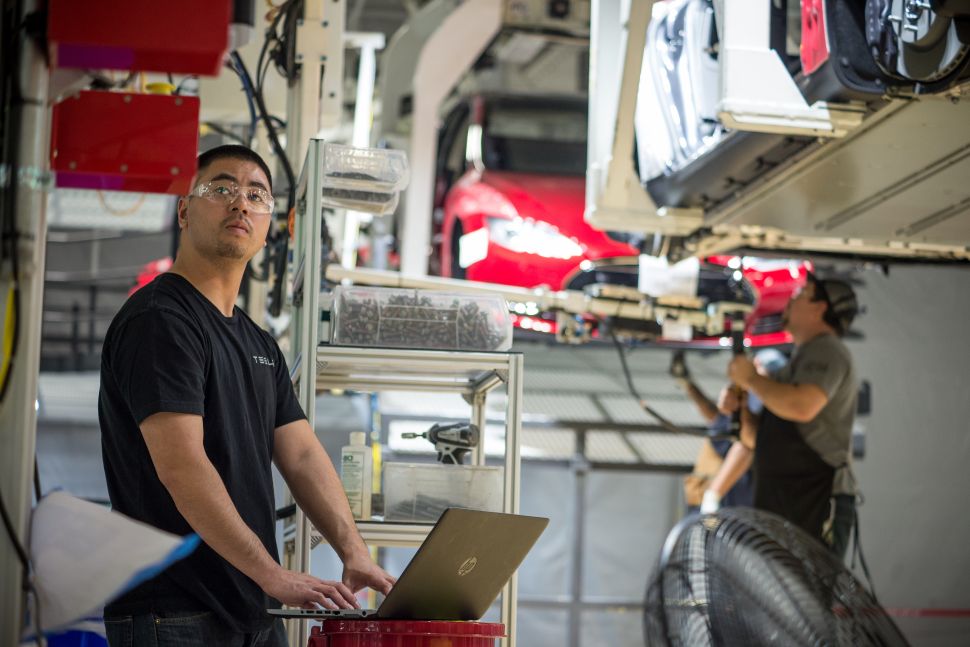