In an attempt to deter rising catalytic converters thefts, New York City police have launched a program to label and track the expensive auto parts.

Catalytic converters are attached to vehicle mufflers and contain the metals rhodium, platinum and palladium, which work to convert engine exhaust into less harmful emissions. All vehicles produced in the U.S. have been required to include catalytic converters since 1975, according to a report from the New York Police Department (NYPD).

However, in recent years, converters have drawn attention from thieves for the increasingly valuable metals they contain. Rhodium is the most expensive, selling for $13,000 an ounce, according to Detective Thomas Burke from the NYPD Auto Crime unit, while platinum and palladium go for a couple thousand dollars per ounce.

As the prices of these rare metals have increased in the past few years, so has catalytic converter theft. Some areas in New York State have seen a 200 percent increase in thefts each year, according to a May press release from the New York State Department of Motor Vehicles (DMV). And in New York City, thefts in 2022 have already quadrupled. There have been 4,551 catalytic converter thefts in the city as of July 10, in comparison to 1,124 thefts during the same period in 2021.

A stolen converter typically costs victims $5,000 to $10,000 worth of damages, according to the DMV, and vehicles parked for long periods of time—such as those in car dealership lots—are often the targets.

The vehicles most sought by thieves include Honda CR-Vs and Mitsubishi Outlanders, as well as hybrids that carry multiple catalytic converters, said Burke. “Cars with less emissions are more likely to be targeted,” he said. Other cars in high demand include large SUVs or pick-ups, as cars higher from the ground provide easier access for thieves to crawl underneath. Once stolen, converters are typically sold to salvage yards or smelters who melt them down for the metals inside, according to Burke.

While Burke describes catalytic converter theft as a “city-wide, state-wide, national problem,” he said that Staten Island has seen a higher increase than other city boroughs. On July 15, the NYPD held an event in Staten Island where it labeled 150 cars with anti-theft etchings, and the following day labeled over 50 vehicles in Queens, Burke said.

This weekend over 100 cars had their catalytic converters marked with serial numbers to prevent theft at the @NYPD121Pct pic.twitter.com/0T15mOCVr3

These markings, called ‘CatEtch’ or ‘CatGuard’, etch a serial number into the catalytic converter in order to link stolen converters to victims and deter thieves from selling them to auto part shops, where Burke said the NYPD conducts drop-by inspections to look for stolen goods.

The NYPD, DMV and various state entities have joined forces to label vehicles. “Everybody is handling it a little bit differently,” said Burke, who added that the DMV usually labels cars at car dealerships, while law enforcement has focused on local residents. Auto manufacturers have also begun labelling converters and are developing a database to link thefts, he said.

The Staten Island event wasn’t the first etching event, but the largest one yet. While the NYPD is also attempting to deter thefts with auto shop inspections and undercover investigations, it plans to continue its labelling program across New York City and eventually the state, said Burke. 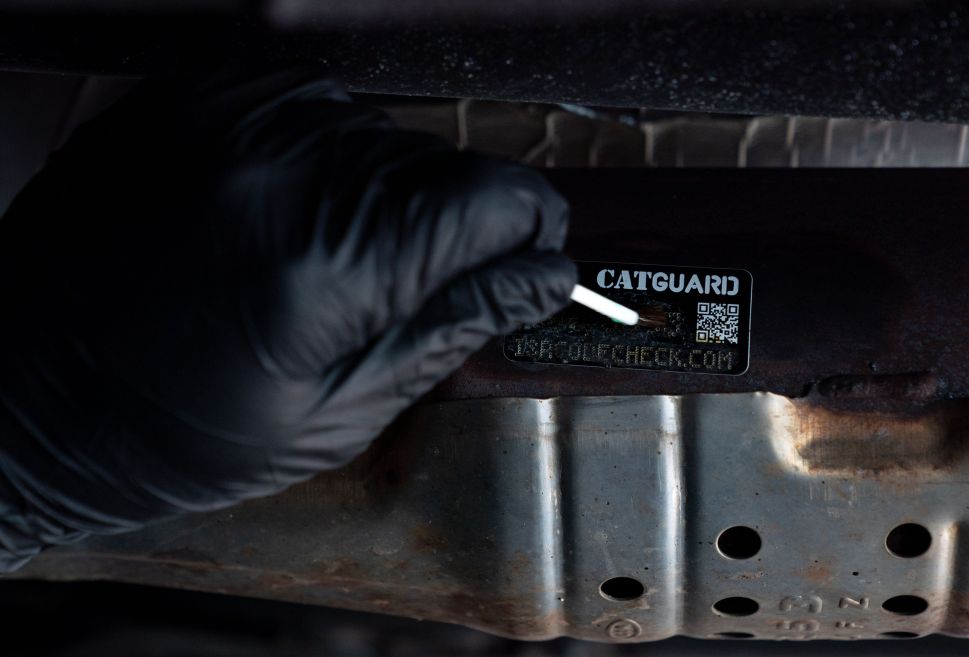