Breaking up with politicians may be hard for companies to do.Getty Images
By Courtney Vinopal • 07/07/22 5:30am

In the wake of the Supreme Court decision overturning Roe v. Wade, companies are facing pressure to pull their donations from anti-abortion politicians.

An internal petition signed by hundreds of Amazon workers on June 27 asked the company to take “immediate and decisive action against the threat to our basic human rights with the overturning of Roe v. Wade,” and to stop donating to anti-abortion politicians. The retail giant has donated $974,718 to political committees that oppose abortion since 2016, including the Republican Attorneys General and the Republican State Leadership Committee, according to the newsletter Popular Information. The union representing Google workers called out the tech company for making similar donations.

Google must stop all donations to anti-abortion political committees & electeds.https://t.co/9gKHFIMy7H

While companies such as Disney and AT&T have pledged to expand healthcare to ensure employees can still access abortion in the wake of Roe v. Wade, these firms “are still giving to the very politicians that led us to this moment,” said Sonja Spoo, the director of reproductive rights campaigns at UltraViolet, an organization that tracks corporate donations to anti-abortion politicians.

But experts who study corporate political spending say these companies are unlikely to halt these donations entirely. If anything, the public outcry may prompt them to adopt more surreptitious tactics for political donations, making it harder for employees and shareholders to follow the money.

Why companies are so tied to politicians

Corporations typically donate to politicians for reasons unrelated to their stance on issues such as abortion, said Jane Sumner, a political science professor at the University of Minnesota and the author of The Cost of Doing Politics.

“Governments at all levels do lots of things that have consequences for companies,” and can pass policies that affect the way they do business, said Sumner. If a lawmaker is considering new labor regulations, for example, or taxation policies, companies want to have a relationship with policy makers who have a hand in these decisions. “It’s almost like an insurance policy for the company,” Sumner said.

This helps explain why Amazon donated nearly $1.5 million to business-friendly politicians ahead of Seattle’s city council elections in 2019, for example, or why AT&T gave thousands of dollars to a conservative political fund with Republican members who voted to overturn the results of the 2020 election, even after it pledged to halt such donations.

Brad Smith, the president of Microsoft, offered a candid explanation last year of how companies use donations made through Political Action Committees, or PACs, to maintain relationships with politicians who can help them somewhere down the road.

“I’m sometimes calling members (of Congress) and asking for their help on green cards, or on visa issues, or help to get an employee or family member who is outside the United States during Covid back into the country because of an immigration restriction,” Smith told employees. He went on to say that lawmakers who have a good relationship with Microsoft might take the interests of the company into account when it comes to issues surrounding national security, privacy, procurement reform, or taxation.

If companies don’t donate to politicians, they might sacrifice that line of communication. Mick Mulvaney, former director of the Office of Management and Budget under President Donald Trump, described a “hierarchy” in his office when he served as a congressman for South Carolina. “If you were a lobbyist who never gave us money, I didn’t talk to you. If you were a lobbyist who gave us money, I might talk to you,” he told the American Bankers Association in 2018.

The U.S. political system perpetuates such behavior. Corporations can spend freely on elections thanks to Citizens United, a 2010 Supreme Court decision that removed political spending caps for companies and other outside groups. Though it’s typical for businesses to donate to politicians on both sides of the aisle, research indicates Republicans tend to benefit more from corporate political spending than Democrats. Between 2010 and 2020, corporations gave $282 million to Republican candidates, compared to $38 million for Democratic candidates, according to a study by the progressive consumer advocacy organization Public Citizen. CEOs of S&P 1500 companies tend to favor donations to Republicans as well, according to a 2019 study by professors at Harvard Law School and Tel-Aviv University.

Jan. 6 was a test case for corporate action on political spending

Many companies faced heightened scrutiny over their donations to Republican politicians who voted against certifying the election of President Joe Biden following the Jan. 6 insurrection in the U.S. Capitol last year.  A number of companies did halt these donations—at least temporarily. But by July, the political action committees for many of these companies resumed those donations, with American Airlines, General Motors, the United Parcel Service (UPS), and Comcast all reversing pledges to halt such spending. A number of these companies told the Wall Street Journal that giving to lawmakers from both political parties was an important way to advocate for policies that benefitted their businesses.

Their reversal show how deeply corporations have come to rely on maintaining political ties, and suggests the overturning of Roe won’t dramatically change their spending patterns. If anything, said Sumner, public pressure may prompt companies to obscure their donations to anti-abortion politicians.

“They can hide things they’re doing” by having their CEO make a donation, or going through an interest group whose membership isn’t publicly available, Sumner said. A company might donate to a philanthropic organization that’s favored by a certain politician in a way that doesn’t generate an easily accessible record, or capitalize on less stringent reporting requirements at the state and local levels. It’s possible these companies have already been thinking about finding back-channel routes to anti-abortion politicians, she added. “Any time the companies think they’re going to generate public scrutiny, there’s a really strong incentive to think ahead.”

Though it’s rare for big companies to sever ties publicly with politicians, Disney did recently face consequences after it pledged to stop Florida campaign donations over the state’s “Don’t Say Gay” bill prohibiting teachings about gender identity and sexual orientation in the classroom. A month later governor Ron DeSantis moved to revoke the special self-governing status the company has enjoyed for more than 50 years.

Thus far few, if any, companies facing pressure to halt donations to anti-abortion politicians have announced they’re doing so. “I think there will be a public backlash against companies that choose sides in this debate and spend on pro- or anti-abortion campaigns,” said Wendy Hansen, a political science professor at the University of New Mexico.

UltraViolet’s Spoo said she believes there is a business case for halting donations to anti-abortion politicians, and she hopes companies will consider it. “The Republicans are already indicating where they’re heading,” with the possibility of making companies liable for aiding and abetting abortion, or meddling in corporate benefits, she said. “Do you really want to fund the person who’s adamantly going to hinder your ability to do what’s best for your workers, and attract the best talent?” 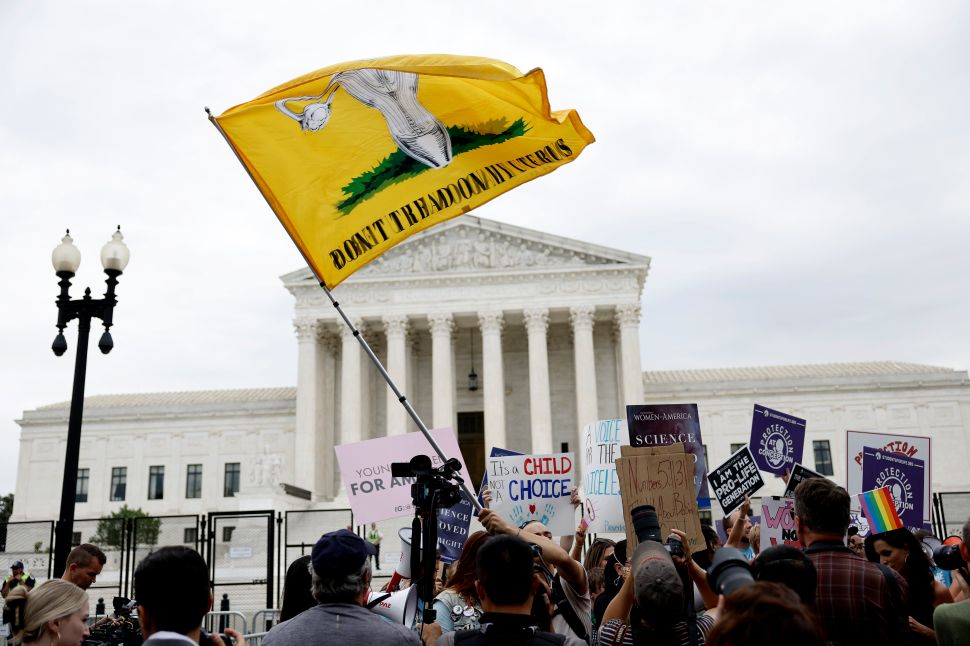