Beast, a routine man vs. animal programmer that is making an appearance in theaters on its way to TV, opens in South Africa, where the criminal poachers who have already driven tigers and elephants to the brink of extinction are now reducing the lion population to the same fate. In a gory slaughter, they kill an entire pride except one. From his footprint, the poachers know “he’s a big one —we better get him or he’ll come after us.” He is. He does. Big time. But this is no relative of MGM’s Leo. He’s mean, hungry, computer generated (of course), and the size of a hairy humvee.

The rest of the movie is about a recently widowed New York doctor and his two distraught daughters, all mourning the death of their mother from cancer. Their long suffering and guilt ridden Dad is played by Idris Elba, who brings them to Africa on a pilgrimage to see their mother’s birthplace and visit the game reserve where their parents spent their happiest years. With the rugged game warden and the doctor’s best friend acting as their guide, this rag-tag assembly of naive city dwellers sets out to see the sights, including the usual assortment of zebras and giraffes and other creatures more wisely viewed from a safe distance at the Bronx Zoo. They also enter a village where the natives have all had their throats chewed open like pulled pork and left in fountains of blood, prompting the guide to say “We better get out of here!” (The dialogue by Ryan Engle is borderline nincompoop.) Before you can ask “Where is Johnny Weismuller when we need him?” here comes that humongous computerized rogue lion, noisy as a locomotive and twice as dangerous.

Half-dead from heat exhaustion, Dad with a broken leg, their vehicle hanging off the side of a cliff with its engine dead, its windows smashed, their radio batteries and cell phone signals disabled, and their guide stranded in a tree surrounded in the middle of a swamp crawling with crocodiles, they waste valuable survival time arguing about how long it will be before they run out of bottled . And this is just their first morning in the savannah —before lunch. Meanwhile the lion is indestructible.

OK, it’s an action thriller with a maximum of preposterous set-ups, fraught with a minimum of actual thrills. Lamely directed by Baltasar Kormakur, every scene is built on cinder blocks of tension, but the riotous screenplay is so silly and one-dimensional you find yourself laughing in spite of yourself. Which leaves me to ask, “What is Idris Elba doing frittering away his time and talent in a bomb like this?” He couldn’t need the money. I’ve had bigger scares watching The Lion King. 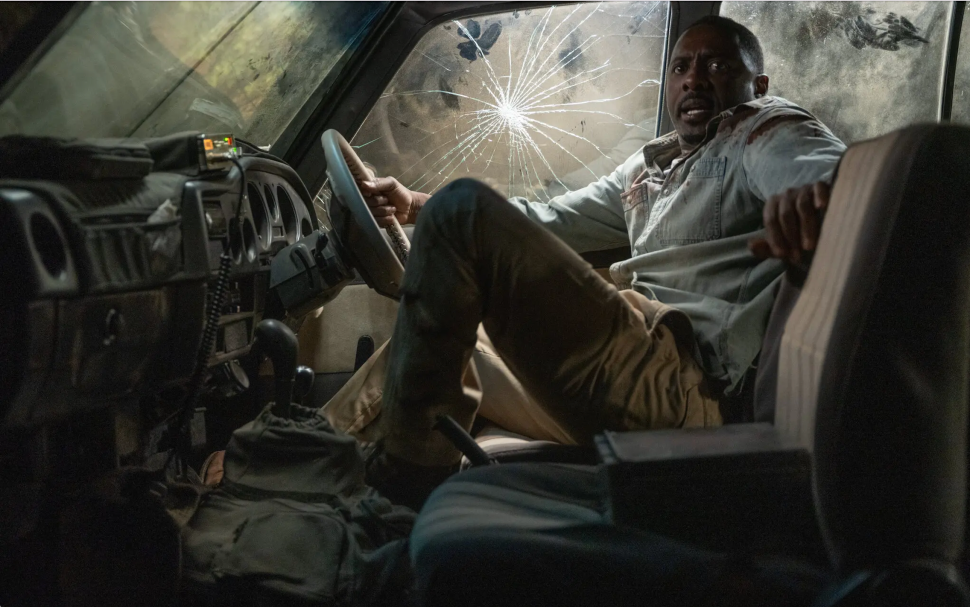