Your affinity for Bodies Bodies Bodies, a dark horror-comedy from director Halina Reijn, will depend largely on whether you find quippy, socially woke Gen Z speak entertaining or incomprehensible. The film, which is like Agatha Christie’s And Then There Were None told through an Instagram filter, is hilariously and cleverly of the moment, embracing the digital age and the types of people it has generated, although it may alienate an older audience. But to those it does speak to, it’s a genuinely fun watch that plays on our expectations of the murder mystery genre.

Sarah DeLappe’s script, based on a story by Kristen Roupenian, is relatively simple: Sophie (Amandla Stenberg) brings her new girlfriend Bee (Maria Bakalova) to a house party at a remote mansion where a group of her childhood friends have gathered for the weekend. It’s hosted by coked up rich kid David (Pete Davidson) and his girlfriend Emma (Chase Sui Wonders). The guests partake in the requisite drugs and alcohol, of which there are plenty, and are glued to their phones. There’s some apparent tension between Sophie and the group, particularly Jordan (Myha’la Herrold), but that’s shoved aside as they agree to play a round of “bodies bodies bodies.” In the game, one person is the “murderer” and the rest have to hide in the dark until they’re discovered and “killed,” or tapped on the back. As they’re playing, a hurricane outside shuts off the power and the WiFi, and one of them is found with their throat cut. The game suddenly becomes a terrifyingly meta experience.

To say much more about the plot would ruin the enjoyment of how the story plays out—the completely insane ending, in particular, is worth keeping a surprise—but it’s not the story itself that makes Bodies Bodies Bodies so compelling. Rather, it’s the way the story is told, with much of the narrative unfolding within the twists and turns of the mansion in the dark with only cell phone lights and glow sticks to light the way. Reijn, along with cinematographer Jasper Wolf, keeps the chaotic, frenzied action contained to the mansion’s rooms and grounds as the hurricane beats down outside, which allows the staging of the scenes to feel wrought with tension and a palpable sense of foreboding. It’s less of a slasher film than a mystery as the suspicious group attempts to figure who the murderer is and who will be the next to die. And, of course, there’s always someone next to die.

The actors, which also include Lee Pace as the older Tinder boyfriend of Alice (Rachel Sennott), are fully invested in the characters, who are compelling because of, rather than in spite of, their entitled unlikability. Sennott is on point as a vapid young twentysomething whose only achievement is her self-indulgent podcast, and Bakalova, our entry-point into the world, balances wide-eyed shock with a sharp edge that leaves you wondering about her motives. They’re all pretty toxic people, although you don’t necessarily wish the inevitable deaths on them. Reijn uses the conceit of the whodunit to uncover the relationships between the characters, often satirizing the way we engage in the modern era (Alice’s claim that she’s an “ally” when accused of racism feels perfectly in keeping with present-day interactions).

There’s a delightful whimsy to the film, even though it’s ostensibly about people being killed. It’s hilarious to imagine that rich kids would resort to actual murder when their access to social media is taken away by bad weather. In many ways, Bodies Bodies Bodies is distinctly of its era. The dialogue, some of which was improvised by the cast, is meme-ready. The skewering of TikTok culture and what it has yielded is pointed. The characters are purposefully, and sometimes obnoxiously, woke. The soundtrack, with a memorable cue of Curtis Roach and Tyga’s “Bored in the House,” reflects the times we live in now. Despite its heightened circumstances, Bodies Bodies Bodies feels like a casual snapshot of 2022. Whether that snapshot ages well remains to be seen, but in this moment it’s delightfully horrifying, with a gasp-inducing conclusion that will encourage a second viewing. 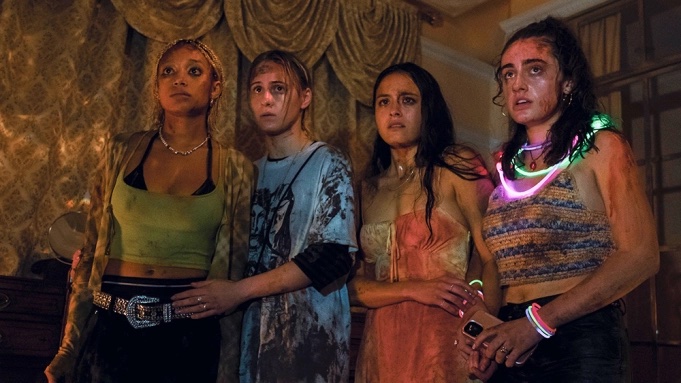