Gleaming like a fake Rolex purchased off Columbus Square sometime during the Clinton administration, Bullet Train unspools like a knockoff from an entirely different era. It is a relic from a time of bankable stars, when movies were pitched over car phones by coked-up producers who’d say things like, “It’s Die Hard on a [fill in the blank],” then promise that a hot young screenwriter would pour reference-rich Tarantino-esque patois over the proceedings like so much glaze on a Honey Baked Ham.

Bombastic, over-the-top, and laden with a shallow irony that calcifies into an empty-headed cynicism, Bullet Train is the latest film from director David Leitch, one of the masterminds behind the John Wick phenomenon. Leitch is also a former stunt performer who has doubled for his Bullet Train star Brad Pitt on five films, so it’s worth remembering that Pitt won an Oscar for Once Upon a Time in . . . Hollywood, a film partially inspired by the relationship between renowned star Burt Reynolds and former-stunt-double-turned-director Hal Needham. It feels like Pitt might be chasing a bit of that magic here.

As a long in the tooth contractor (codename Ladybug) trying to heist a briefcase on behalf of a criminal syndicate, Pitt is still in the laid back, too-cool-for-school mode that made his Hollywood performance so effective. But divorced from that film’s incisive intelligence and creative ambitions, it feels like he’s phoning it in— gently cresting on the first turn of the last leg in his glorious nearly 35-year-career as a film idol. One of Pitt’s most reliable attributes, his comedy, is particularly off point; he accentuates punchlines, mugs for the camera, and at one point has to flail about with a highly venomous snake on his hand in a weak approximation of Jerry Lewis.

The snake is one of a half dozen or so deadly assets on board a speeding train from Tokyo to Kyoto. The others include the pouty Prince (The Kissing Booth’s Joey King), a British assassin who disarms her opponents in a schoolgirl getup, and Tangerine and Lemon (Aaron Taylor-Johnson and Brian Tyree Henry), hitman brothers—also British—who bicker back and forth in repartee that is often lively, yet never witty.

Particularly noisome is Lemon’s obsession with the Thomas the Tank Engine series—he identifies someone’s personality by connecting them to characters in the books. It’s a schtick that must have seemed more clever on page than it comes across on screen. (Kudos, however, to the North Carolina-born Tyree Henry for not only his solid British accent, but also his excellent impersonation of Thomas & Friends narrator Ringo Star.)

When the film works, the uninspired dialogue’s quick delivery serves as a rhythm track propelling the action forward—more the snare drum of Bullet Train’s frenzied song than its lyrics. By far the movie’s most impressive technical aspect is the editing of Icelandic-born Elisabet Ronaldsdottir, who worked with Leitch on 2017’s Atomic Blonde and 2018’s Deadpool 2 and was one of the editors on Shang-Chi and the Legend of the Ten Rings; she ably stitches together narrative clarity within the film’s nonsensically overblown showpieces.

Bullet Train is the latest example of the current chummy school of Hollywood moviemaking, where big stars show up for a scene or two and the audience briefly giggles before marveling at how cool the star’s friends are. I won’t spoil the so-called fun, but the choices speak to the film’s overall lack of confidence in the story it’s telling.

Things really have to be precisely calibrated for comedy to work amidst all of this vicious violence—blood pours from eye sockets, gushes from neck arteries, and spouts from nearly decapitated heads—but no such luck. Instead, a talented ensemble of actors must stumble their way through chaotic tone shifts and declarations of irony that feel both uninspired and cruel.

“Am I in hell?” asks Tyree Henry’s character when he wakes up in a train car bathroom surrounded by bloody bodies.

No, Tangerine. This is just another pale imitation. 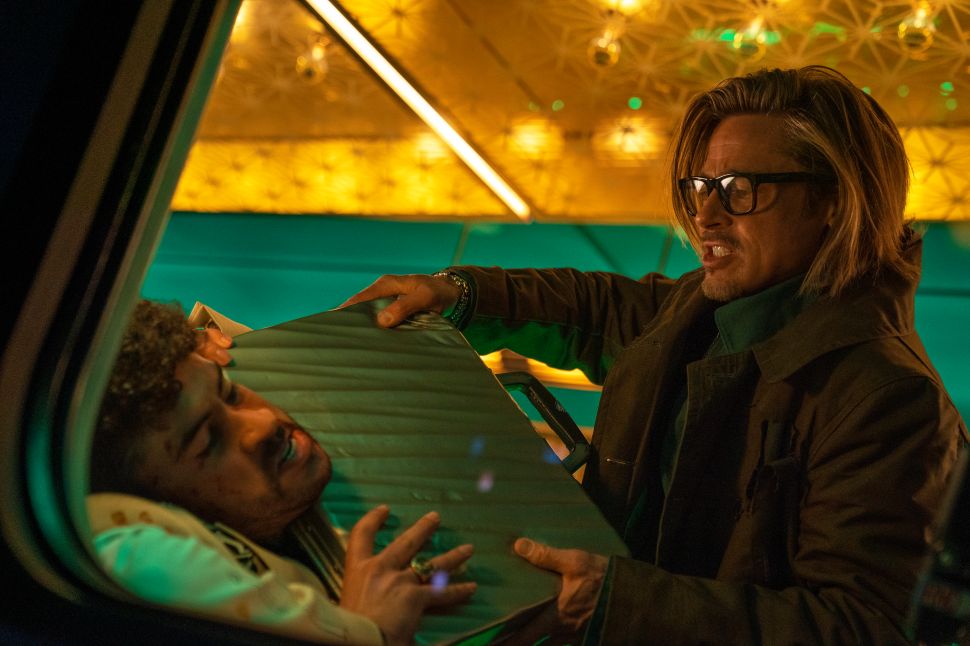