Broadway’s smash hit Come From Away is scheduled to close on October 2, after more than 1500 performances.

I never wanted to see it. In fact, I had decided I would refuse to watch it.

Because back in 2017 when I heard a new show on Broadway was opening about Americans stranded in Canada on September 11, I was horrified. How could someone make such a nightmare into a singing and dancing buffoonery? Who would go to this show—especially in New York? It seemed sacrilegious to me.

Thankfully, a lot of people did go see “Come From Away.” Thousands around the globe, from Dublin to Sydney to Shanghai, and, yes, spots in Canada too.

I put off going despite the rave reviews, until four years later when a friend’s daughter working in the box office discovered I was one of them: the “plane people” or “come from aways” as Newfoundlanders call outsiders. She insisted on gifting me and my 13-year-old son tickets to see the five days that changed my life put to music. How could I say no?

I stuffed every snack bar napkin and tuft of toilet paper I could find into my skirt’s pockets before the curtain rose. I must have known what I had been running from.

“Are you all right, Mom?” my son Max whispered in between scenes. I nodded and half-smiled, pressing a gnarly gob of tissue to my cheek.

“Welcome to the rock!” the cast bellowed as passengers on 38 jumbo jets from around the world arrived in Gander, Newfoundland after the U.S. closed its skies. When actors recreated those terrifying moments in our airplane seats on stage, I was crammed in right next to them. Suddenly, I heard the captain on my Lufthansa flight announcing simply, “America is under attack.” En route home to New York from a holiday in Germany, my mind immediately leapt to nuclear war and the panic that we’d never return to our homeland again.

Canadian Mounties had to inspect every piece of luggage on our flights when we finally disembarked after 13 long, sweaty hours. So, we had nothing, not even a toothbrush. For the first time in most of our lives, we were refugees. If it had not been for the Red Cross greeting us with toiletries and food when we stumbled out, we would have been absolutely lost.

“I’m just freaking out, I wish I was home,” one of the plane people in the show said on the phone with family.

“We barely know where we are!” another exclaimed, and he was right. We Americans have many strengths, but geography doesn’t tend to be one of them. Our inherent egoism leads us to learn less about other places and, sadly, other people. Later they would post a map in the school turned shelter where I stayed with a big arrow announcing, “You are here.” Americans flocked to it like kids to free candy.

So when the Ganderites appeared like angels to welcome us that portentous night we deplaned, their accents and folksy sayings seemed like a foreign language. And their natural inclination to wrap their arms around us, metaphorically and literally, shocked us too. We watched the images of the towers falling for the first time half a day after most in our home country. Our new friends consoled us as we stared, mouths agape and eyes flooded, at the horror on the high school shelter’s TVs.

At first, their unbridled kindness seemed weird. “Would you like to come back to my house for a shower?” a Walmart worker asked a man in the musical. That really happened. And yes, I did shower in a stranger’s house, despite what our parents tell us about not even conversing with them. Then again, Gander was a place where we unlearned what we had learned, in so many ways.

I don’t mean experiencing new-fangled cuisine like cod au gratin, toutons and figgy duff, though the endless supply of food our hosts served was tasty. I mean this time we didn’t just read about an international crisis or watch it on TV. We were in it. We didn’t just donate to the Red Cross or sympathize for a minute from half a world away. We stood in their shoes, with no clothes beyond the day’s outfit watching helplessly while our people were attacked. This forced us to consider: would we be as compassionate as Ganderites if refugees showed up in our town?

Can we learn from history?

No need to ask Gov. Greg Abbott of Texas that question. Twenty-one years later, some of us seem to have forgotten 9/11’s stark lesson. Not only was it a time that united us in grief and resolve, but reaffirmed our common humanity. The current alarming hatred and fear of others, history shows, will only come back to haunt us.

“Come From Away” teaches us how to change that – but if you don’t make it before the curtain falls, read the book The Day the World Came to Town by Jim DeFede or the one my son picked out for a summer book report. “I can’t believe what these people go through just to survive,” he said while devouring Refugee by Alan Gratz, the parallel stories of three children fleeing persecution in a concentration camp, Fidel Castro’s Cuba and Syria in 2015. These types of stories should be required reading (or viewing) for all Americans.

We plane people may have been fleeting refugees but trust me, we got a taste of it we will never forget. In a matter of minutes—on your way to visit family, friends or a new spot overseas—you could become a “come from away” somewhere too.

As we see in Ukraine, on top of displacement, evacuees often grapple with crushing personal loss. In Gander, I did too, learning that my college boyfriend died at Cantor Fitzgerald in the North Tower. A local couple that befriended us comforted me with the kind of embrace Ben Brantley referenced when reviewing the show. Their empathy lives with me still.

Back in 2017, Brantley, chief theater critic for The New York Times wrote, “Try, if you must to resist the gale of good will that blows out of ‘Come From Away’ the big bearhug of a musical that opened on Sunday night at the Gerald Schoenfeld Theater. But even the most stalwart cynics may have trouble staying dry-eyed during this portrait of heroic hospitality under extraordinary pressure.”

I had been one of those skeptics. Now I’m convinced that while this unforgettable show may end, what it taught us must go on. 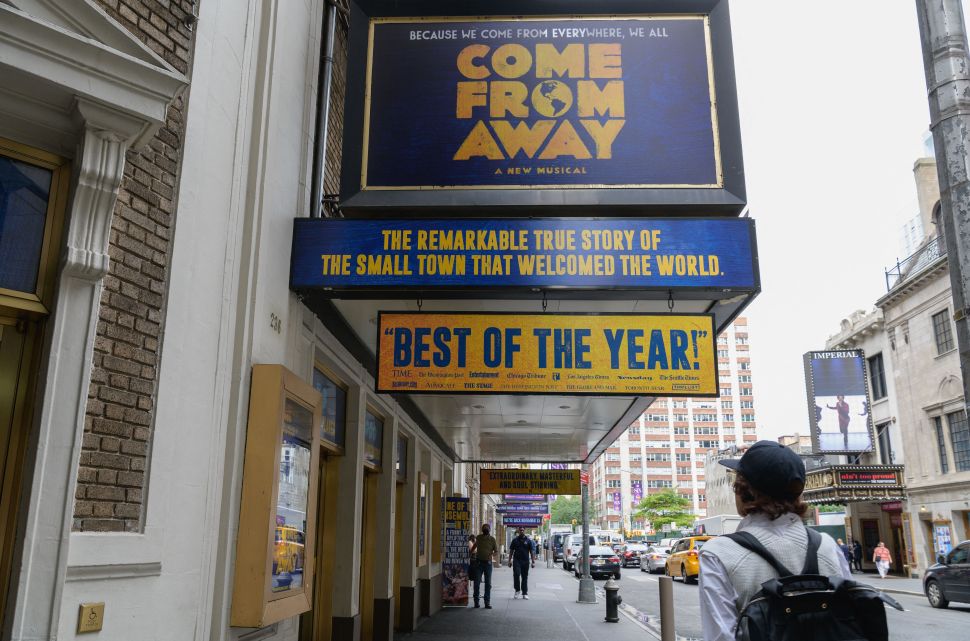 Filed Under: Theater, Entertainment, Broadway, Canada, 9/11, come from away