Immortality is a game for movie fans. Those who are enticed by the process of filmmaking — the ups and downs chronicled in Mank or Black Bear — will likely experience this mystery game as a work of staggering genius as they spend long hours trying to put together pieces of three films using a Moviola. Others might see those same scenes as an intriguing but confounding mish mash.

Sam Barlow’s Immortality: An Interactive Trilogy is actually both, and there’s a beauty to that. Beginning with 2015’s Her Story — a mystery in which you viewed digitized VHS police tapes using keywords such as “murder” — Barlow has been a master of the narrative-oriented game genre using full motion video (FMV) rather than coded graphics, hack-and-slash fight scenes, and eye-popping distant vistas. Immortality centers on the life and work of a missing actress named Marissa Marcel (played by actor Manon Gage). Early on you’re confronted with over 200 thumbnails on your screen, each of which lead to movie scenes. Click on a face in one scene and it leads you to another that may not even be part of those first 200. There is footage of table readings, wrap parties, rehearsals, press interviews, location scoutings.

As you explore, questions emerge: Why were three of Marissa Marcel’s movies Ambrosio, Minksy and Two of Everything never screened in theaters? What happened to her? Did she go into hiding? Is she dead? Is there something supernatural here? And also: How on earth do I make this work?

For the first hour or so of Immortality, I didn’t know what I was doing. One goal is to put the scenes of those three lost movies together in linear fashion; another is to answer those questions regarding Marcel’s disappearance. Acting as a combination of sleuth and movie editor, I fell in love with the process, hard.

That’s partially because there’s so much rich stuff here, and I took time to appreciate the mammoth amount of work within. It’s a little like Timecode, Mike Figgis’ experimental movie that shows four real-time takes at once, but on steroids. The scope of Immortality led Barlow to secure the help of film and TV screenwriters Allan Scott (The Queen’s Gambit), Amelia Gray (Mr. Robot) and Barry Gifford (Wild At Heart). Barlow also partnered with Netflix for the game’s mobile version, indicating his budget was larger that previous efforts like Her Story.

Most likely, you’ll begin the game as Marissa is being interviewed in a Tonight Show-like setting. It’s the late 1960s and the actor who plays the host seems to mimic a leering, smoking Johnny Carson. He demeans the young actress by saying, “You’re smarter than you look.” It’s hard to watch. But she’s stoic and introduces a clip from Ambrosio, a movie, you’ll discover later, based on M. G. Lewis’s lustful gothic horror tale called The Monk — an actual book published in 1796. Luis Buñuel attempted an adaptation and the graphic novel Batman: Gothic lifted liberally from the plot.

I saw that Marissa Marcel’s initials were M.M. and, of course, drew comparison to the life of Marilyn Monroe. Beyond that, the careful tribute here to the gritty visual style of low-budget ’60s and ’70s films — prior to the age of overwhelming special effects — is spot on. That was a time of exploitation and exploration, and that is here in all of its ugliness and brilliance. This is a very mature game, and before you start, you’ll encounter a list of warnings that may lead you to pause or stop playing — from blasphemy regarding Catholicism to abject sexual assault. Add a touch of the supernatural, and it’s not a game for the faint of heart — or mind.

Nonetheless, I kept digging in. For the first few hours, I resisted the urge to take notes about placing scenes in a particular order. Instead, I noted the excellent work of actors Manon Gage. The footage takes behind the scenes of the three lost movies was wonderful. Watching Gage take direction, seeing the evolution of a scene and how she was able to ramp up or ramp down her emotions, was completely convincing. (A few years ago, I spent the day on the set of Shirley in Catskill, NY, watching Elizabeth Moss and Michael Sturhlbarg get into character and film scenes for the indie film about horror writer Shirley Jackson’s life. Barlow has shown the process absolutely correctly.)

So what happens if you just lose yourself in Immortality? You’ll eventually find key plot points that lead to revealing secrets. The first one I found, which involves a terrible accident, was shocking. Here’s why. As a player, you’re pulled into thinking about the stories within the movies, their plots of horror or crime. The acting you see on the set makes you believe the characters are alive. So when something astonishing comes up in rehearsal, it feels like it’s happened in real life. “Jesus F-ing, Christ!” yells the director offscreen. I felt a mix of emotions: surprise, panic, sadness. How could this happen?

Immortality’s raw content is sometimes offensive. And its pace is slowed by consideration of the facts. That’s only right. It’s not fast-moving like a shooter or fighting game. It invites you to play with purpose, carefully piecing together plots, theories and clues, thinking deeply about what you’ve just witnessed. As you view hundreds of scenes using your old editing machine, you go beyond the role of player to a time 50 or more years ago, almost as part of the crew. After indulging in this landmark game, you have to go back again to being yourself, still thinking about movie making, the creepy magic within — and the creeps who continue to populate the film industry in real life to this day. 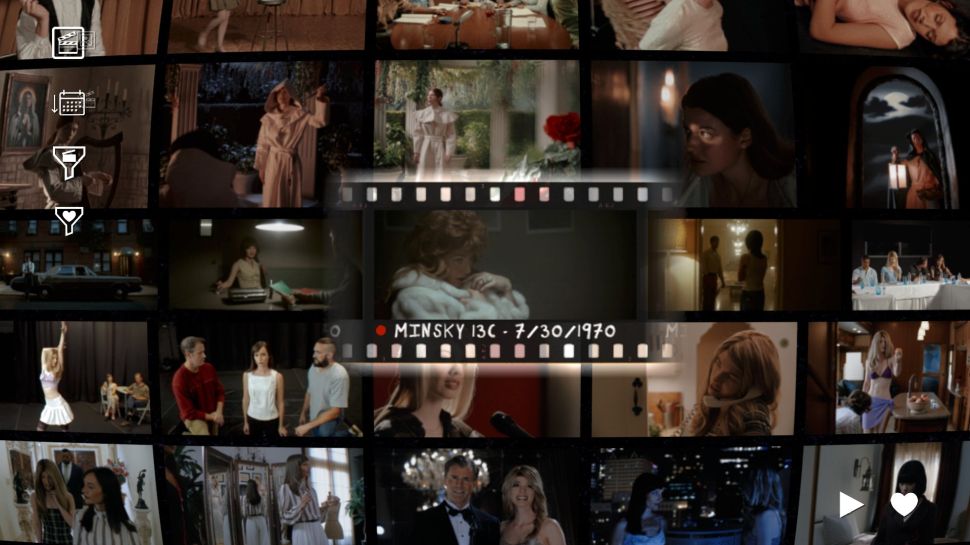