On the evening of August 19th at Actors’ Equity headquarters in North Hollywood, the sun was setting over a mixture of workers, union members and press teams with big black video cameras. There was a sense of excitement and curiosity as the group waited for the speeches to begin. On August 17th Actors’ Equity, the national labor union (associated with AFL-CIO) representing more than 51,000 professional actors and stage actors, had filed a petition for a union recognition election with the National Labor Relations Board (NLRB) on behalf of workers at a topless dive bar located off Lankershim Boulevard in NoHo.

The Star Garden Topless Dive Bar is like any other place where people pay to see naked people, experience various kinds of intimacy, and connect for a moment with a fantasy beyond their grasp. It is a workplace riddled with as many reasons to leave as it is with reasons to stay. Star Garden dancer Charlie described to the Observer why she loved Star Garden, “The reason why all of us are fighting so hard for it: The girls, every single person we worked with, created this community that it felt like a co-op already.” Charlie’s description of this community mimics many in managed spaces; the sex trade cultivates a space of vulnerability, a feeling of survival camaraderie, and is a fertile hotbed for friendship. All of the Star Garden dancers that spoke to the Observer preferred to be identified by their stage names, which is also a common practice at their workplace.

If the Star Garden workers are recognized as employees (based on the union’s filing with the NLRB) they will be able to participate in a union election. They have been picketing outside of the club since March after being barred from working after raising concerns, so they haven’t technically been Star Garden employees since then, but if they’re found to have been unduly terminated they will become eligible to participate in a vote to certify the union. As the LA Times reported “Most of the dancers involved in the petition said they were barred from entering the club when they showed up for work the next day.”

It’s not about Amazon and Starbucks

Despite its apparent relevance, the 2019 California law regarding labor classification, AB 5, had nothing to do with the ability of Star Garden workers to unionize, since an earlier law, AB 2509, specifies dancers (or workers generally in “public housekeeping establishments” and the “amusement or recreation industry”) are full-time employees, not independent contractors. A 2000 analysis by the California government regarding the law’s impact states:

“This clarifies situations where dancers may be incorrectly identified as independent contractors and not employees entitled to keep gratuities.”

“When we were listening to the Starbucks and the Amazon union talk, they were like, they’ll take away your benefits. They’ll take away all of this and then like eventually get to your job. I’m like, they didn’t give us that, it just goes straight to being fired,” Charlie said.

The circumstances behind the union movement at Star Garden have been dreadfully underreported or misreported, but the result is the same. Various reports have described troublesome events such as a customer hugging a worker without permission; non-consensual video recordings by creepy regulars; OSHA violations, and special treatment for one individual who was allowed to stay past the 2 A.M. closing time. The dancers allege that these events occurred leading up to March 18th when the strike began.

A noteworthy exception is Suhauna Hussain’s reporting in the LA Times: “Left to deal with inappropriate behavior from customers on their own, every dancer who spoke with The Times described feeling vulnerable to abuse. All said they had been groped, picked up, smacked, restrained or grabbed by customers without their consent.” This matches what sources told me of their experiences at Star Garden.

Lap dance quotas as a weapon

Every worker I talked to at Star Garden described a hostile work environment where their jobs were constantly threatened, with Charlie emphasizing an arbitrarily applied, and unusually high (for a dive bar), $200 lap dance quota that was used as a weapon whenever management wanted to get rid of a worker. All of the workers I spoke to discussed an outright hostility from management towards staff that included abuse around quotas, surveillance, and hours. Star Garden’s owners have not responded to repeated interview requests by multiple news outlets, including those submitted by the Observer for this piece.

The sole statement from a Star Garden representative came in July, when the bar’s lawyer spoke to BuzzFeed. Joshua Kaplan denied all misconduct, calling what the dancers have said “maliciously false.” Kaplan did not respond to our questions.

I attended the rally on August 19th at Actor’s Equity, as well as the picket line at Star Garden itself. I spoke to about ten workers and organizers, as well as attendees of the evening. They described a pattern of workplace abuses that they referred to as “the three strikes” (in the baseball sense) that led to the strike (in the labor sense.) While walking twenty feet from the picket line with two workers, I saw Star Garden’s security guard sitting grumpily behind  joyous protesters who were cheering at every honk from supporters driving down the boulevard. We moved to where we could speak openly without surveillance; according to both, it’s not unusual for management at Star Garden to repeat workers’ private conversations back to them as a not-so-subtle reminder that the dancers are always being recorded.

Strike one: A “joke” that was more of a threat

The first “strike” has been referenced in several news reports, rarely in full; four different Star Garden workers confirmed to the Observer that a worker went to the acting manager on duty to request that a regular client (for those unfamiliar with the jargon, a regular comes regularly but often with special privileges by establishments to encourage that relationship, often at the expense of workers) no longer be allowed to stay past closing. The manager on duty responded by discrediting her concerns, making a “joke” that the regular would harm her if she caused a problem and telling her not to push it. She responded that the “joke” wasn’t really that funny; she was fired for causing problems. This happened despite many workers viewing her as a top earner.

Numerous workers confirmed to me that each and every client reported to management for abusive behavior continued to be welcomed as a regular. Star Garden doesn’t have an in-house black list, a way to keep track of clients who pose a genuine safety risk versus ones who might just smell bad. One worker, May, confirmed to the Observer: “The guy that got the dancer fired for talking about the videotaping thing was a regular. He came in maybe three or four times a week. He was constantly trying to reach over the tip bar and touch us. We all had to talk to each other and say, don’t go near him.” Sex workers keep sex workers safe, Star Garden workers kept Star Garden safe.

The second strike was described by Star Garden worker Charlie: “I was on stage dancing and a customer was recording without consent. Another dancer came up because obviously security is not gonna do anything about that. They don’t care, that customer was drinking, making the club money. So they’re not gonna say anything. Another dancer, bless her soul, walked up to him and was like, you can’t record without consent. Put your phone away. Thank God. It turned into a little scene because he was over served. She got fired for ‘starting drama.’”

Workers described an environment where they were discouraged or banned from requesting help from the security guard if they were being assaulted or harassed. A Star Garden worker told me that a member of management told her, “Hey, if you have a problem with a customer, if you’re being assaulted, you can’t go to security, you have to go to a manager.” Charlie told the Observer that “a manager wasn’t always there. And then if you did go to a manager, they’d be like, ‘oh, okay. We’ll review the tapes later.’ As if these tapes later are gonna solve the problem of you getting assaulted right now.”

Stoney, an organizer with sex worker advocacy group Strippers United who uses her stage name professionally in her organizing work, informed me at the picket line that after the workers reached out to them seeking advice, they delivered a petition (which according to the LA Times, 15 of the 23 dancers signed) to the management on March 18th. Management locked them out the next day and required one-on-one meetings for any further contact, according to multiple sources. Stoney told me that the first lockout resulted in Star Garden workers and their supporters picketing for eight days straight until it became apparent that the club, like most managed spaces in the sex industry, is dead on weekdays. They only picket weekends now.

Another organizer with Strippers United, Alice, confirmed to the Observer that after meeting as a collective, the Star Garden workers confronted managers and presumed owners Stepan K. Kazaryan and Yevgenya Jenny Kazaryan (the club’s precise ownership, even on official documents, is murky) with their demands, which didn’t go smoothly. Alice described the management’s response as “we’ll talk to you one-on-one, but we’re not talking to you as a group. And that was it, that was when they decided to strike. Strippers United has been with them ever since.”

At the Actors’ Equity rally someone shouted, “Los Angeles is a union town!” to which the former labor organizer and progressive LA city council candidate Hugo Soto-Martinez shouted back “That’s right, LA is a union town!” Soto-Martinez is taking aim at incumbent Mitch O’Farrell’s seat in Council District 13. “When I heard about the workers here organizing I thought it was an incredible fight because it really shifts the paradigm of what a worker is,” Soto-Martinez told the Observer. “I think that there’s these false concepts that people have about who deserves to have a living wage and who doesn’t.”

Director of Organizing & Mobilization at Actors’ Equity Stefanie Frey, asked if Actors’ Equity’s move should encourage more strip clubs to seek unionization, responded: “Right now the focus is on the Star Garden contract. I am happy to talk to anyone from the live entertainment industries, who have long been exploited and I really hope that will lead more in the right direction in taking power back in their workplaces.”

Dancers’ rights have been a long time coming

“Sex worker unions—including stripper unions—have been around for some time and are not the result of AB5.  In fact AB5 does not affect organizing rights—only wage, unemployment insurance, and workers compensation rights,” University of California law professor Veena Dubal told the Observer.

Star Garden illustrates the power workers have when they come together to say enough is enough, even up against the unique complexities of recognizing sex work as labor. No one can reasonably debate in 2022 if sex work is work, if sex workers should be able to form a union (or reject one); if only because they were never asking for your permission.

This story was updated on August 25. 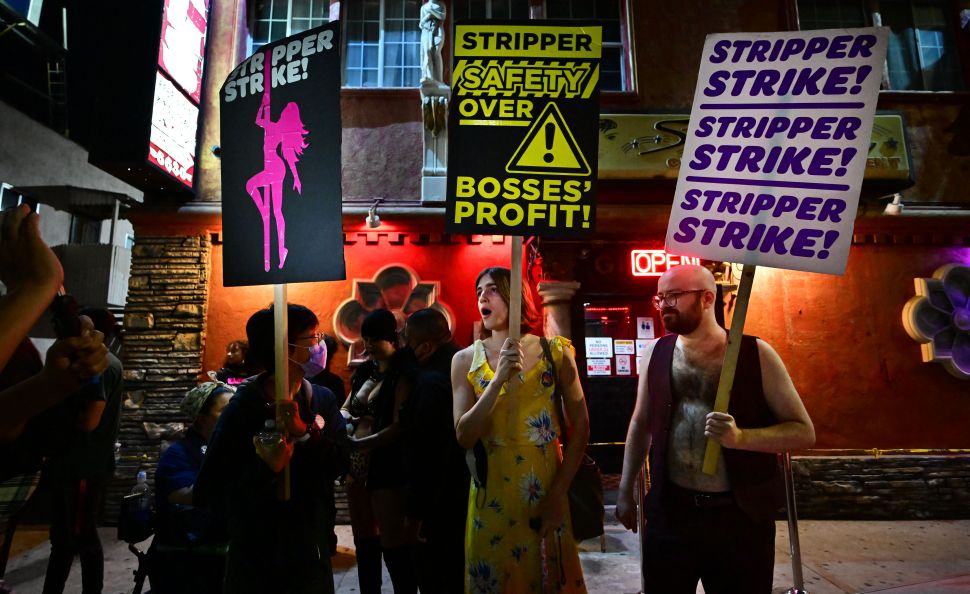