Sometime after Victor/Victoria opened on Broadway in 1995, a small, solitary mouse made its way up from the bowels of the Marriott Marquis Theater and into the theater’s wardrobe room. Julie Andrews, then inhabiting both title roles, got the word from her hairdresser, who told her traps were set.

The actress reacted to this news with a combination of horror and compassion that one could expect from somebody who owes her Mary Poppins Oscar to the guy who created Mickey Mouse: “Oh, could you please make sure they put down humane traps? If you catch the little mouse, don’t kill it. Take it out somewhere far away so it can have a life in the country.”

Andrews sheepishly confesses to this response: “The hairdresser looked at me as if I were mad, then said, ‘Julie, the theaters on Broadway are riddled with mice in the basement. There are probably hundreds—perhaps even thousands—of mice under here. This one probably just came up to look at all the stars.’ And that made us laugh. Then, I suddenly had a lightbulb about that notion and started thinking, ‘Oh, my God! A troupe of mice in the basement of a great theater! Wonder if they are putting on their own shows downstairs for their own audiences.’”

She took this idea to her usual collaborator—her daughter Emma Walton Hamilton, who is as theater-savvy as her mother. With husband Stephen Hamilton and producer Sybil Christopher, Hamilton founded the Bay Street Theater in Sag Harbor, New York, 31 years ago and has been running it ever since—all this, while simultaneously writing 31 children’s books with Andrews.

“The more we talked about it, the more excited we became,” Hamilton admits. “What a way to bring the magic of theater down to a kind of manageable scale for young readers! Within this troupe of mice could be all the classic characters of any theater, whether human or mouse: the director, the difficult leading lady, the intern, the weary producer, the hysterical hairdresser.

“Some could be terrible stereotypes—but done with great affection and love. We had such a good time writing it, modeling these mouse characters after people we know and love and work with, bringing our theater experiences and backgrounds to bear in creating this story—while, at the same time, giving kids the not-so-subtle message that theater matters. That’s the underlying agenda for us: to help kids discover and understand the wonders of theater.”

Replete with illustrations by the late, great set-designer, Tony Walton (Hamilton’s dad and Andrews’ ex) and a glossary of theatrical terms to keep the kids in the loop about theater etiquette and expressions, The Great American Mousical first saw the light of print in 2006. Six years later it first saw the light of the stage, courtesy of Connecticut’s Goodspeed Opera House.

This stage translation came as a slight surprise to Andrews, who’d sent the director of Goodspeed, being a friend, a copy of the book. “Within two days,” she recalled, “we got word back, ‘Oh, we’d love to try to develop it. Could you—would you—be interested?’” They were.

Composer Zina Goldrich and lyricist Marcy Heisler, who musicalized the Drew Barrymore Cinderella movie Ever After, were engaged to write the score, and Hunter Bell, who wrote the book for the Tony-nominated one-act [title of show], took on the Andrews-Hamilton book.

The plot that evolved is a life-and-death situation for theater. Like the humans in Follies, the mice in The Great American Mousical are threatened with demolition and extinction. But what actually saves theater from the wrecking ball are the mice, which, Hamilton points out, plays right into the overriding message that “no matter how small one is, one can always make a contribution. You never know what you can achieve even in spite of your size or your age.”

Andrews was young herself when she started storytelling. “I loved it as a kid,” she remembers. “Used to make up things all the time.” But her first book, Mandy, came about as a forfeit—some 50 years ago. As a result of a game she was playing with her eldest daughter—Jennifer Edwards, her step-daughter from her late husband, director Blake Edwards—Andrews said, “Okay, what is my forfeit to be?” Jennifer suggested that she create a story for the family.

“I thought to write it as a little fable,” Andrews recalls, “but, realizing Jennifer was a town girl and didn’t know much about the country, it kinda grew and grew—thanks to Blake’s influence. He told me, ‘Darling, it’s a sweet idea. Just keep building pages, one after the other.’”

Once she wrote fini to Mandy, Andrews “felt so abandoned and empty that I immediately wanted to do another, which was The Last of the Really Great Whangdoodles. That began it.”

Her deep dive into children’s books didn’t occur till 1997—when it had to. “After Victor/Victoria and after the operation on my throat, which sadly wasn’t successful—I was kinda asking around, thinking, ‘I must do something!’ And when we were asked by my publisher if I had anything for very, very young kids—particularly boys—I said, ‘Let me go think about it, and I went home to Emma. She had just had a lovely son, and I said, ’If you had to choose any book from the library for Sam, what would it be?’ Emma said, ‘It would have to be about trucks—firetrucks, dump trucks, whatever. He was a year old and pretty much pre-verbal, but only wanted to read books about trucks and sleep on sheets that had trucks on them and wear shirts that had trucks on them. You can only read ‘The bulldozer goes Ca-runch’ just so many times!’”

Like the dutiful grandmother, Andrews cased the bookstores for family-oriented truck stories and found none. “So I said to Emma, ‘Shall we do one together and see what happens?’”

Thirteen Dumpy the Dump Truck stories happened—followed by (for the distaff side) 12 Very Fairy Princess stories. Punctuating these was their mutual love, The Great American Mousical.

The Goodspeed liftoff—seeing their story materialize on stage—is still a vivid and active memory for the mother-daughter authors. “We had always hoped that our Mousical would go on from there and have kind of a continued life,” Hamilton says, “but, between other commitments and Covid and all sorts of other dramas getting in the way, it got stalled.”

Her brand-new news is that this log-jam is finally breaking up and a new production is in the works, starting tonight. “We received this invitation from the Wallis Annenberg Center in Los Angeles to mount a full production in 2023,” she beamed. In preparation for that, Bay Street is relinquishing its “dark Monday” to a staged reading of The Great American Mousical that not only benefits the theater but gives the authors a chance to put it on its feet again and update it. 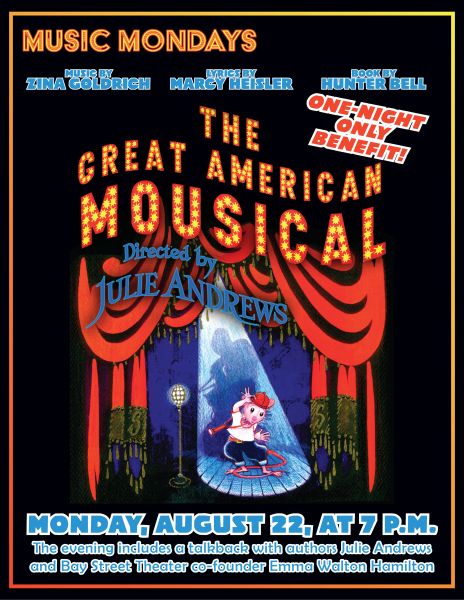 Andrews will be directing a Broadway-caliber cast headed by Debra Monk, Howard McGillin and Jonathan Freeman. The other roles (with one exception) will be played by company members of Ragtime, which currently occupies the Bay Street stage the rest of the week. The exception is Hope Hamilton, 19, who will be directed by her own grandmother in the role of the intern.

Ridiculously glamorous and agile for 86, Andrews has raked in a stockpile of Life Achievement Awards, the latest being one from the American Film Institute this summer. Along the way, there’ve been an Oscar, a BAFTA, two Emmys, three Grammys and six Golden Globes. Queen Elizabeth made it official in 2000, dubbing her a Dame for services to the performing arts.

It’s a challenge to do a piece on Julie Andrews and not use the word beloved. I almost made it. 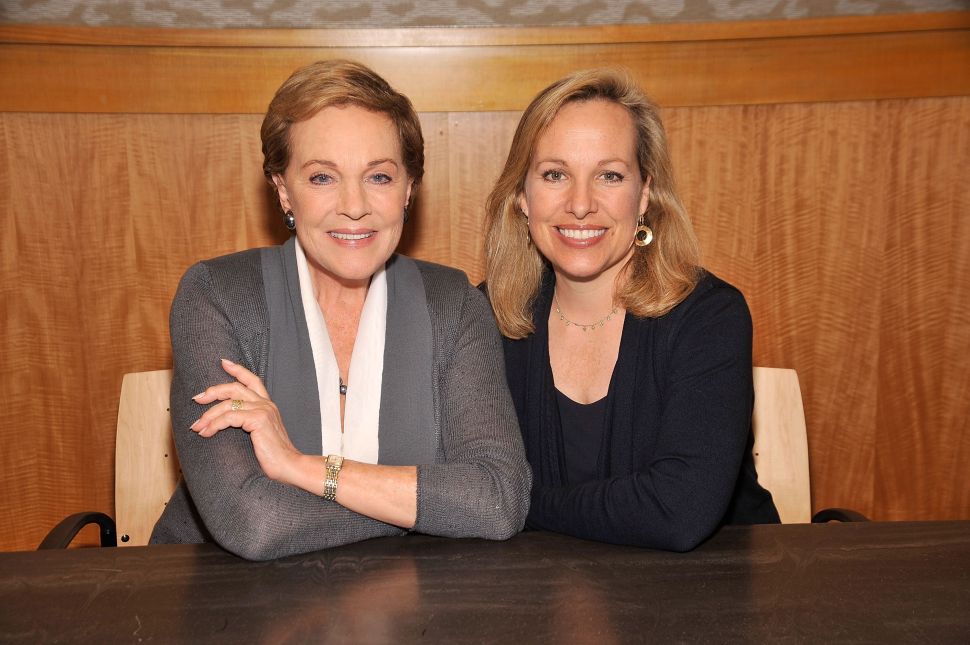