If you’re lucky enough, you can spot Victoria Villasana’s miniature embroidered pieces stamped onto the walls of some quaint street in Peru, India or Panama.

The artist’s jubilant embroidery weaves threads of life into black-and-white portraits of icons in society who’ve challenged the status quo across politics, music, fashion, activism, art and so on. Hailing from Guadalajara in Mexico, she is a passionate proponent of what she terms “old-school creativity” – creating things with her hands – and is happiest when indulging in ceramics and woodwork or poring over history books in the library.

Villasana doesn’t have a fascinating childhood anecdote about how her grandmother or aunt passed on their know-how or love of textiles to her. It’s quite anticlimactic but both her parents are accountants and she’s never taken up a course on embroidery or textiles.

First things first, how did you get started?

I moved to England in the early 2000’s. The experience of moving away from your home, culture and comfort zone really moves certain parts of yourself, it ignites growth and creativity.

I barely spoke English but luckily I landed a job as a florist and stayed there for 2 years before moving on to pursue freelance styling. Then I became a mom, but when my son was young I found myself creatively frustrated and needed something to keep me busy. I picked up old magazines that were lying around and started to experiment by embroidering on them with yarn to make a 3D collage of sorts. One day, when I was living in London, I saw a guy putting up his art down the road from where I lived. He was making characters and creating almost like some sort of scene. I googled him and surprisingly he happened to be Mexican as well! He really inspired me to go outside and put up my embroidered portraits to share with the world instead of having them lying on my desk – thanks to that people started picking up on my work.

A common denominator underlining your pieces are freely hanging threads that festoon the bottom of the frame – is that intentional or something you arrived at along the way? What is its significance?

When you start doing something creative, it often stems from your unconscious. You’re not thinking, ‘I’m doing this to reflect the meaning of life etc etc’. You just do it. After it’s done, then you start reflecting on why you did what you did.

I’m fascinated by the contrasts in life. For example, textiles represent an ancient craft while photography is somewhat modern or contemporary. My work unites the past and present; two polar opposite art forms.

With regards to the hanging threads – it’s like leaving a story unfinished. As humans we are constantly changing and the more we accept that, the better we can flow with life’s twists and turns rather than waiting to achieve certainty which is never within reach. Leaving the thread hanging is a representation of incompletion, and that’s okay. We will keep growing, evolving and our identity is always a work in progress.

How do you choose whose portraits to embroider over?

It’s usually of personalities we all culturally recognise and are familiar with such as Nelson Mandela, Frida Kahlo or Marilyn Monroe. People’s faces fascinate me and perhaps that’s why I prefer working with it as opposed to abstract art. I’m moved by people who’ve questioned existing norms and created change but I’m also moved by things happening in the world – be it social causes or current affairs.

Sometimes when I’m reading a book or watching a documentary, there are characters in it I admire which make me want to research more about that particular period in history. I think it’s important to reconnect with forgotten history and know stories that may not necessarily be told in school or taught through textbooks.

Take us through the process of completing a piece – start to finish – and the trials or tribulations that come with it which may not seem apparent to us?

My embroidery process is very intuitive; the pattern just flows. Sometimes when I’m reading a book or watching a documentary, I research its interesting characters. I don’t want to make something that’s just pretty, I want it to say something.

When I pursue commercial commissions I tend to digital sketch before beginning a piece but when given the freedom, I just pick up the needle and yarn and get started. I have a rough idea of the colours I’d like to use, but that’s about it. The pattern starts to build as I go along and I trust that process. Of course there are instances when I don’t like the way it’s going but I just carry on, I will finish the piece even if I don’t like some bits of it. But surprisingly in the end, it’s those parts that I like the most.

There is the romantic idea of an artist working in a studio for 8 hours, which is a ridiculous fantasy to be honest. You need a break from the creative process, it’s not realistic to be constantly absorbed with your work.

Artists often critique their own work, sometimes a bit too harshly. Is it difficult for you to cast an objective lens on your own labour of love?

My growth as a person goes hand in hand with my growth as an artist; it’s interconnected. In my twenties I was very insecure, I didn’t know who I was. You are what society or your culture tells you who you are.

I’m very embarrassed by the stuff I did 7-8 years ago, there is a temptation to erase it from the Internet but I don’t because that was my process and there is beauty in that. Perfection can’t be achieved straightaway; this is a reminder that I still need to hone my technique and will probably always continue to. Even today, I’m surprised that people actually like what I do. Every time I finish a piece I suffer from imposter syndrome.

Instagram is a competitive platform, particularly for creatives. Does the algorithm or number game get to you?

It does feel nice when you put something on Instagram and it gets a lot of likes or comments. But I restrict my usage of that app and try to use it solely as a visual diary of my journey as an artist. The key is to be consistent and put in the hours.

How did your experience as an immigrant translate into your artistic journey?

In Mexico I had a protected life, but in the UK I became just another immigrant. But struggle is good for the human soul, I’m grateful for those hardships. London is multicultural and I met people from all walks of life. I love travelling and I think culture is a beautiful manifestation of the human experience. But when I moved to England, what I missed the most about Mexico was the feeling of community. I missed walking around in the markets, surrounded by fruits, welcoming vendors who greet you with a smile and bursts of colour everywhere I turn. When I walk around in the streets of Guadalajara, I feel like I’m walking with a blanket; I’m part of something bigger than myself. 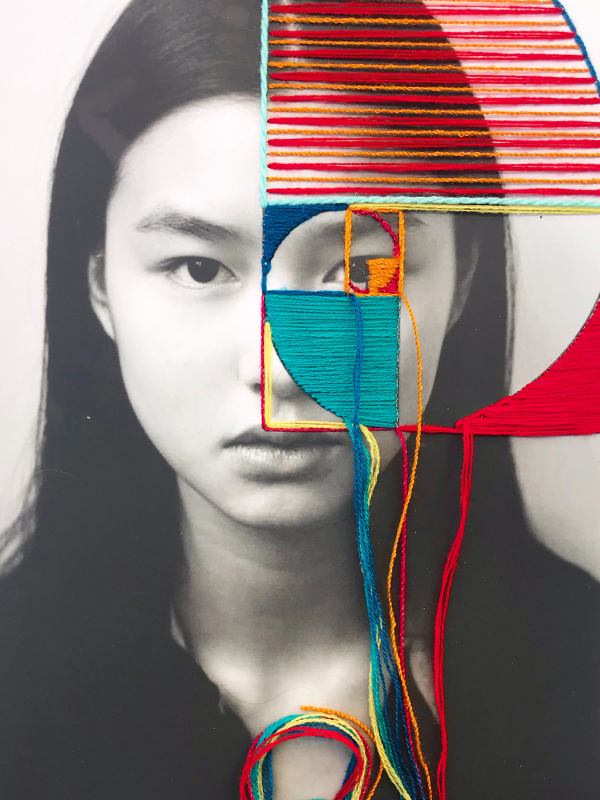