In 2015, Jesse and Emily Cole went deeply in debt to buy the rights to own an unnamed, unformed baseball team in a collegiate summer league and lease a vacant stadium in Savannah, Georgia.

As a business move, it was not an auspicious start, but today the Savannah Bananas are a viral hit, with more than 80,000 people from around the country on a waitlist for tickets for games that combine the antics of the Harlem Globetrotters with the pizzazz of a Ringling Brothers circus.

Baseball games are generally slow-moving and long-lasting, which can deter people who aren’t fans of the game’s intricate play. The Coles sought to make baseball fun for casual spectators through an alternative version of the sport they call Banana Ball, which includes skits and choreographed dances, as well unique rules like a two-hour time limit and letting batters steal first base. The Savannah Bananas have aired on ESPN and have garnered a TikTok following of 3.1 million, more than the New York Yankees, Atlanta Braves, Chicago Cubs and Boston Red Sox—combined. The Coles have also rejected many of the money-making tactics in sports, including sponsorships and advertisements. And yet, it’s profitable.

Van Johnson, Savannah’s mayor who has been to dozens of games, said the atmosphere is electric. “It’s a rags to riches story,” he said. “Obscurity to prominence.”

The Savannah Bananas play Banana Ball against the Party Animals, which are also owned by the Coles and act as the foil for the Bananas’ hijinks. These games take place at Grayson Stadium, their home field in Savannah, as well as on their Banana Ball World Tour, which in 2022 visited seven different U.S. cities. While the creative team plans certain skits that take place during each game, the gameplay itself isn’t scripted.

The Bananas are skilled baseball players with a knack for performing. One player, Mat Wolf, is a 34-year-old former college player taking time off from his job as a firefighter to play with the Bananas. In his free time, he developed more than 20 trick pitches incorporating  juggling and handstands.

The Bananas also field a team made up of current college athletes who play traditional baseball in the Coastal Plain League, an unpaid summer league for collegians. This team does not play Banana Ball, but they still engage in some stunts during games, including wearing kilts.

Bananas tickets cost $20 with food and drink included. In addition to no sponsorships or advertisements in the stadium, fans won’t pay ticket purchase fees, parking fees, or shipping costs for online merchandise orders.

“We have a business model that doesn’t make sense,” Jesse Cole said.

After buying the team, the Coles got the community involved by hosting a competition to name the Bananas. By their opening game in May 2016, the Bananas sold out their 4,000-seat stadium. They’ve sold out every game since their first season.

“They’ve done a great job at capturing a large fan base here in Savannah,” said Rob Wells, executive director of the Savannah Sports Council, which promotes sporting events in the city.

Jesse said they are making 10 times the amount of money from merchandise orders than they would have made selling sponsorships. Their revenue is evenly split between ticket sales and merchandise.

“We believe in long-term fans over short-term profit,” he said. “People don’t come to baseball games to be sold.”

The Savannah Bananas have leased Grayson Stadium until 2025 under their current contract, which calls for annual rent payments of $25,000 and obliged the team to pay $250,000 worth of stadium improvements. The Bananas will likely retain their spot in Savannah past 2025 because of the stadium maintenance funding.

ESPN+ first streamed a Bananas game in April. Further games appeared in August, with one game simulcast on ESPN2. John Lasker, vice president of digital media programming at ESPN, said they decided to stream Bananas games in conjunction with their docuseries “Bananaland” which premiered on Aug. 19 and follows the team through their world tour.

While Lasker doesn’t necessarily think the Savannah Bananas will change mainstream baseball, he said they have still successfully answered some of the gripes with the slow game. “And it might open the door for those who wouldn’t usually experiment with traditional baseball,” he said. As the 2022 season winds down, ESPN+ will stream four more Banana Ball games on Aug. 26, Aug. 27, Sept. 2, and Sept. 3.

Before buying the Bananas, Jesse Cole worked as the general manager of the Gastonia (North Carolina) Grizzlies, where he introduced performances such as dancing players and grandmas competing in beauty pageants between innings. He bought the Grizzlies in 2014 and when the Savannah Sand Gnats vacated Grayson Stadium in 2015, the Coles decided to spread their new baseball model south.

“We bought the team with debt because we believed in what it could be,” Jesse said.

Savannah residents were skeptical at first, said Johnson. Going from hosting a minor league team to a collegiate summer league team was a downgrade. Naming the team the Bananas sparked ridicule, as did its logo featuring a strong-armed banana swinging a baseball bat. The Coles told the community to give it a chance.

While Bananas games attract tourists, the majority of fans at each game are Savannah residents, Wells said. And the Bananas’ ties in the Savannah community go deeper than a loyal fanbase. At every home game, the Bananas partner with a nonprofit and donate a percentage of sales to the organization.

The creative team brainstorms ideas in what they call OTT, or “over the top,” meetings. While many of their TikTok videos have gone viral, including one with 90 million views, Traczuk said they focus on entertaining their live fans rather than their online ones.

“We don’t want paying customers to have to go on TikTok later to understand what they saw,” he said. Instead, the creative team will look at a TikTok trend and suggest ways to make it bigger or fit it into a baseball game, he said. For example, videos of people pretending to fall and then dancing on their hands and knees are trending on TikTok. At a Banana Ball game, player Jackson Olson held his hamstring while running home, then fell and danced on home plate. A live audience might find the skit comical while TikTok users might recognize the trend players are mimicking.

With 15 million visitors in Savannah each year, the Bananas offer another attraction to a city where tourism is a major industry. For the local residents, they’re another reason to be proud of their city, Johnson said.

“Banana Ball is catching on,” said the mayor. “I wouldn’t be surprised if other cities tried to cash in on it too.” 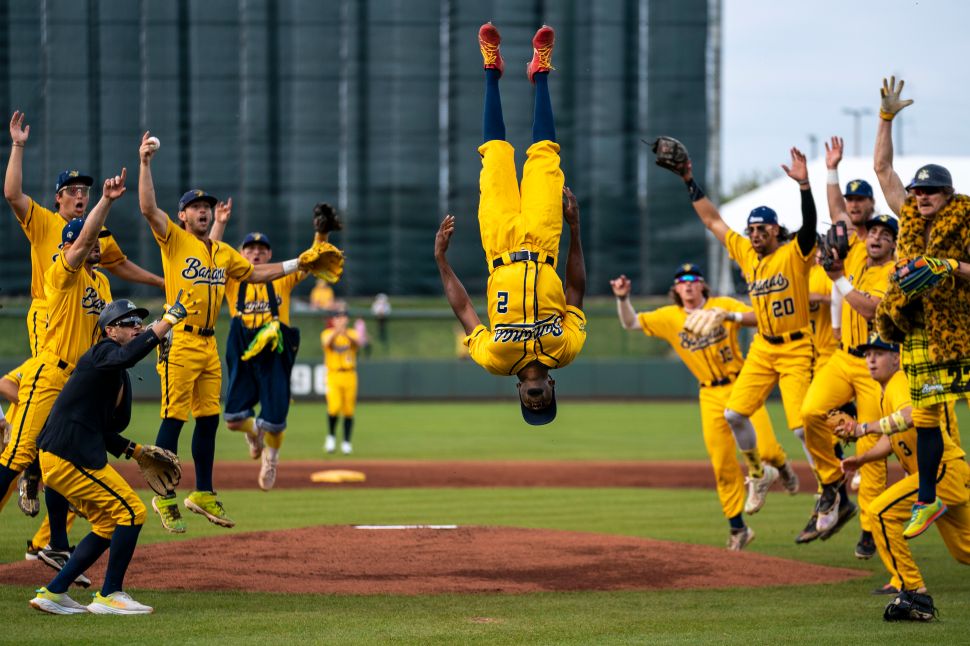