Color is a polyphonic language which brings Nigerian-American artist Victor Ekpuk (b.1964) and Indian-American Natvar Bhavsar (b.1934) to explore the expanse of an expressive, richly saturated palette to draw new geographies in parallel shows at Aicon gallery.

Three years after a first solo show, Ekpuk presents in “I am My Ancestor’s Essence” paintings and steel sculptures from 2014 to 2022, revisiting the notion of home, uprootedness, and reimagined traditions. Through faux naïve bold strokes, Ekpuk gives body and voice to dominating, primary colors. They roar; challenge; and disrupt. Ekpuk reinterprets in sensitive yet graphic ways nsibidi, traditional pictogram symbols from South and South-East Nigeria that travelled to Haiti and Cuba along with the Atlantic slave trade.

Such symbols hover above the minds of characters, for instance in paintings Matriarch 2 (2021) and Tête à Tête 2 (2022), and sculpture Ibibio Girl (2022), which convey the untranslatability of inner thoughts. In Oracle (2014-2022), nsibidi-inspired blue shapes wrap the entire canvas. Their totality solidifies their indivisible features. The character—quasi-symmetrical and textured—blends into this vast collective unconsciousness that is neither fully past nor present. Their face is symbolized by an omniscient eye. The mind primarily observes; its function is to see what is both visible and hidden.

From African roots to closer landscapes, This American (2022) is an impressive attempt at capturing the physicality of Blackness in today’s American society. The painting is based on an earlier sketch, then called Head Of State (2011). Sharp vivid lines suggest divisiveness, confrontation, and liminality—there’s an inside and an outside, a self and others. The totem-like character—a recurrent iconography in Ekpuk’s artworks—stands tall. Their hair forms the outlines of ambiguous lookouts. One can peak at others in these interstices or shield from external attacks. Here nsibidi shapes also add to pattern and texture that resist erasure.

“It is not necessary to try to literally read my work, it is more important to allow oneself to feel the art, without the burden of looking for meaning in each mark,” said Ekpuk in an interview with Art Breath, on a personal vocabulary he has derived from art and writing. A Smithsonian Institution fellow now based in DC, Ekpuk’s works have featured in the Johannesburg Biennial (1995), Dakar Biennial (2014), and the Institut du Monde Arabe (2017) among other noted venues and collections.

Ekpuk’s paper-based art, through acrylic on collage, celebrates womanhood and its sacred attributes. Fabric and more nsibidi labyrinthine marks define the silhouettes of statuettes, reminding how Benin bronzes and other wrongfully acquired indigenous artifacts remain in an obscene number of collections, far from where they truly belong—at home, in their communities. The confidence and defiance of Liberian Girl (2022) contrasts with the melancholic gaze in Lady in Sunday Dress (2022) and there’s a degree of loss in both images. In the former, the red, unfilled outline of a totem haunts like a painful memory, while the latter carries a cloud of sinuous thoughts along, casting a shadow on an otherwise sunny day.

In such works, Ekpuk uses the codes of portraiture and incendiary colorful icons to denounce colonial legacies and their simplified aesthetics. As the incarnation of a mental soil and cultural home, totems are the essentialized witnesses of a fluid identity that seeks to capture celestial longings and the firm recognition of a land and territory. Color is a means to perceive and such phenomenological experience is unparalleled in the works of Natvar Bhavsar.

“Part III: Works from 1987 to 2005” forms the third installment of a serialized retrospective. In this latest show which includes 14 paintings, Bhavsar plays with the linguistic infinity of color which he turns into a dance, an intimacy, a movement of pigments stripped of figurative elements. In doing so, he reveals the power of visual intensity in minimalist yet powerful terms.

Indian-born Bhavsar moved to New York City in 1962, at a time when artists lived in the same neighborhoods as galleries, and the SoHo milieu included familiar profiles such as Mark Rothko and Barnett Newman. It’s in abstraction that Bhavsar remembers the colors of Indian textiles and dyes and the powders of the Holi Festival. Color is a refuge for the vagaries of recollections, the diffractions of the mind, and its liberating potential.

Bhavsar presents three bodies of works which collectively embrace the tension of exploring the mind and finding one’s place in the world. This duality is shown as a gradual exploration of cool to warm colors, most of which contain a dense core of pigments such as VASOO II (1997) and VASOO III (1997). These splashes, puffs, and blots channel the unmeasurable frontier of outer space, a malleable scale that also lends itself to molecular forms. Whether in the infinitely large or irreducibly small, our mind wanders in the various diffractions and declinations that these pigments augment.

From intensely saturated color, paintings such as MANJAREE II (1996) and VERGAA (1973-2004) bring more subdued, ethereal hues. With them, we pause and time lingers just so softly in an edenic, cotton-like vista. GAT III (2001) is more cluttered and troubled, with grays desaturating yellow hues.

Bhavsar usually paints in phases or cycles, alternating between blues, and reds, and purples, and more. There isn’t a color that he hasn’t approached in his over 50-year-long career. More recent works such as BHADRAA III (2005) and ANDHARE (2005), apply controlled craftsmanship in carving beautiful indentations and details which converse with Ekpuk’s artistic rendition of nsibidi or Rachid Koraïchi’s mystical lettrism.

It’s hard to convey in words the sensory emotion these paintings provoke. Bhavsar is part magician, part musician and the seasoned talent that permeates through his works grips in its apparent simplicity. Where Ekpuk communicates visceral love and violence, Bhavsar’s diffused light appears more forgiving but no less profound.

Bhavsar understands darkness and shadows as necessary variants and interlocutors to prismatic companions, a subjectivity that appropriates paint as more than just a matter or medium. Bhavsar depicts evanescence and reveries, the smoke of a moment and alliterations of human elevation in much more organic ways than the 1960s Light and Space movement of the West Coast, which has been revived through recent shows such as “Color Out of Darkness” curated by James Turrell at Pace last spring. While his works are part of an impressive number of institutional and private collections, his contribution to contemporary abstract expressionism has often been underappreciated.

“Color possesses me. I don’t have to pursue it. It will pursue me always, I know it,” wrote Paul Klee in his diary, during a memorable two-week trip to Tunisia with fellow artists August Macke and Louis Moilliet in 1914. “Color and I are one. I am a painter,” Klee would add that same day.

So much around color remains elusive, immaterial, and consecrated. Luminosity is an aura, an energy, addictive stimuli, and pure life. In both Ekpuk and Bhavsar’s shows dedicated to displacement and feeling, we see in color a beating heart, the remanences of dreams, after-images, and the unwavering sounds of elsewhere. 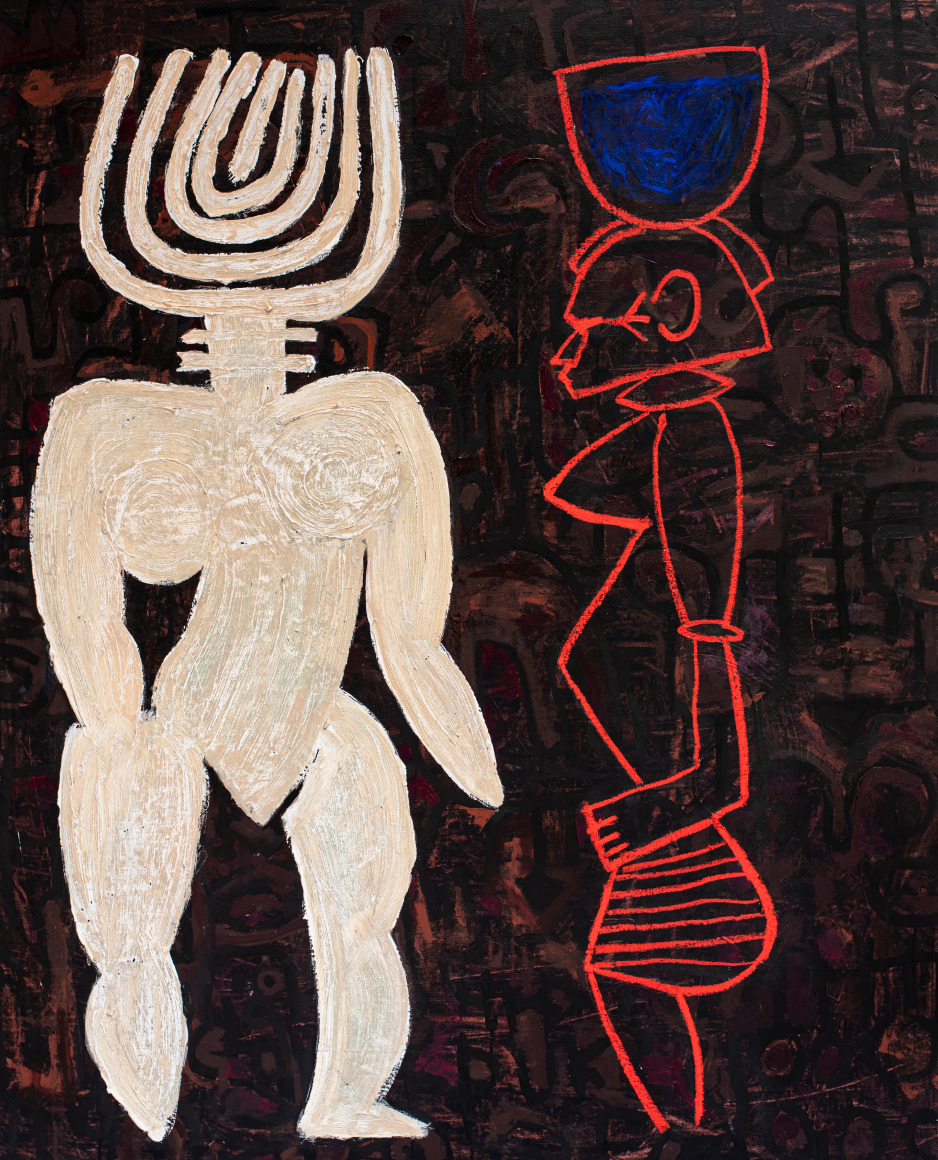