Considering that Into the Woods is only her second Broadway show (and the first that she hasn’t written), Sara Bareilles seems remarkably assured—at home—frolicking her way through this fractured fairy tale from Stephen Sondheim and James Lapine, currently holding forth through Oct. 16 at the St. James Theater. Most of the local critical giants fell hard for it.

Home turns out to be the operative word for Bareilles’ ability to catch the mood of the moment—be it comic, dramatic or musical—and make the most of it. A Grammy-winning singer-songwriter, she hails from a different tradition, writing autobiographical piano-pop ballads that have sold millions of albums with chart-toppers like “Brave” and “Love Song”—but, on stage, what you get is a fully-formed performer.

How did it happen? “Theater is a huge love of my life,” she confesses, contrary to her recent history. “I grew up a theater kid and was in local theater productions. My mom was a well-known actress in our community. We grew up having cast parties at our home and always going to the theater. I’m from a really small town—Eureka in northern California. That was where I found my footing as a performer, so theater has always been a sacred place for me.”

Into the Woods is a scrambled mashup of The Brothers Grimm’s Greatest Hits—Cinderella, Rapunzel, Little Red Riding Hood—plus a few other fairy tales. Bareilles belongs to the other faction—the baker’s wife who is rendered barren by a witch’s curse and must counter this curse by collecting various items from the Grimm gang in order to become pregnant. By intermission, a happily-ever-after has been affected. Then, in the second act, things get boring and really grim, and we can read into these storybook crises intimations of modern worries.


Running alongside these fairy tale figures, in and out of the woods, Bareilles has much to play as the baker’s wife—and many to play with. Director Lear deBessonet has handpicked a delightfully loony ensemble—worthies like Nancy Opel, Annie Golden, Julia Lester, Aymee Garcia, Joshua Henry, Patina Miller, Cole Thompson, David Turner and David Patrick Kelly.

“The baker’s wife is in the middle, stuck between these two worlds,” she says. “I think people find themselves feeling that way, relating between the person you think you should be and the person you’re becoming. She makes mistakes, she’s messy, she’s relatable.

“The thing that’s so beautiful about working with Lear is that there is a lot of freedom in the process to play,” Bareilles points out. “We did a little bit of discussion of my character—especially the relationship with the baker—and she was encouraging of teasing out places in the script in which we could make her contemporary and modernize her just a bit.

“One of the early things I brought up to Lear was that the baker’s wife doesn’t have a name. She’s just the possessive of the baker, so I gave her a name. To me, she’s Rebecca. Lear really likes a lot of freedom in the room. One of her genius moves was pulling together this extraordinary group of people—some of the most inventive and exciting folks on stage.”

So far, Bareilles has had two baker-hubbies. Neil Patrick Harris originated the role when the revival opened as a New York City Center Encores! production May 4, and Brian d’Arcy James took over the part when the show moved—practically of its own volition, but with a little help from producer Jordan Roth—June 28 into the St. James for a strictly limited eight-week run.

Quite understandably, Bareilles is not about to reveal her favorite baker. Rather, she poses a naughty question: “What if you like both of your husbands? That never happens! I got very, very lucky. It’s been a really exciting time of discovery. I actually feel like Neil was a big reason why my character ended up being funny for me. He’s so intense on comedy and finding all the bits. That’s something that Neil is so good at. I think I learned a lot from working with him.”


When Into the Woods premiered on Broadway 35 years ago—of all the colorful and fanciful characters populating the show—it was the relatable baker’s wife who won a Tony for Joanna Gleason, and Bareilles is blissed out to be filling those shoes. “I think Joanna Gleason is so special. There is something so immediate about her presence, so honest. She sent me flowers on our opening night, and I keep the card up on my makeup mirror. I treasure it because I just love and respect her so much. That was such a classy thing to do, so warm and inviting.”

Should the baker’s wife bring a new round of Tony evaluations, it will be a novel experience (and category) for Bareilles. “This is something that I deeply love and enjoy,” she admits. “Brian and I were backstage in between scenes the other night, just thinking how lucky we are to get to go out there and play. We just pinch ourselves. It’s, like, ‘Can you believe it? This is our job. We come out on stage and make people feel things and play.’ That’s what we do.”

Bareilles backed her way onto Broadway, not as an actress (at least not initially) but as a songwriter musicalizing Waitress, a 2007 film written and directed by the late Adrienne Shelley about an unhappily married, pregnant, pie-baking waitress. (Shelley, who gave herself a secondary role in the film, was murdered shortly after filming was completed when a 19-year-old man broke into her West Village apartment to rob her.)

Instead of pulling ballads out of herself, Bareilles allowed all the characters to have their respective say/sing and created a Broadway score as “an exercise in empathy” as a result.

That score got her nominated not only for a Tony but for a Grammy as well. Jessie Mueller was also nominated for the lead role of Jenna Hunterson, and, when she decided to surrender it, Bareilles tried the part on herself, and ticket sales jumped $1.2 million in a single day. She did it on two more times on Broadway—each time with a box-office bump—then took it to London. Waitress completed its Broadway run Jan. 5, 2020, with its 1,544 performance.

And that still wasn’t the end of it. Eleven months ago, during the show’s limited return engagement—with Bareilles—a film version of the show was done, to mark the spot: It is the first Broadway production to have an all-female production team: Diane Paulus (director), Bareilles (composer/lyricist), Jessie Nelson (book adapter), Lorin Latarro (choreographer).

Bareilles has no idea when it’s coming out. (“We’re in post-production, as we speak.”)

At present, she’s dealing with the end of her second Broadway adventure. Broadway is not in her immediate plans, so she’s reverted to pre-Broadway form: “I’m going to start writing songs for the next record. And I hope to be able to get in a little resting as well.” 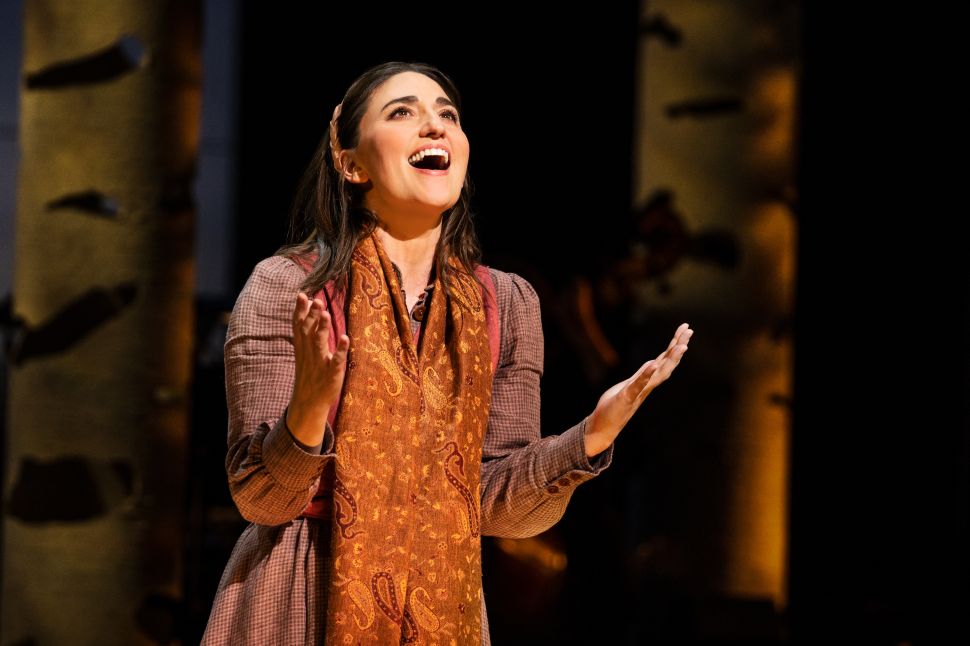