Yet another Italian museum has been hit with climate activists gluing themselves to artwork, the latest in a series of unique protests transpiring in art institutions across Europe. The environmental groups leading these demonstrations—UK-based Just Stop Oil and the Italian Ultima Generazione—are supported by a California fund calling itself the primary financial supporter for the two groups.

The most recent museum protest occurred on July 30 at Milan’s Museo del Novecento, where four Ultima Generazione activists glued themselves to the base of a 1913 Umberto Boccioni statue. The group was charged and fined, which is typical for its protests, said Chloe Bertini, a member who took part in the demonstration. She said the charges are usually are for demonstrating in a non-authorized protest and damaging the glass or stands protecting artwork.

This comes on the heels of a July 22 protest, when Ultima Generazione demonstrators attached themselves to a Sandro Botticelli painting at Florence’s Uffizi Gallery. The group used standard superglue for both protests, according to Bertini, who described its goal as “raising awareness, putting pressure on the government and shedding light on how much their inaction and focus on fossil fuels is condemning us.”

The Italian group collaborates and shares tips with the Just Stop Oil organization, whose members since June have been gluing themselves to artwork in museums in London, Glasgow and Manchester. Both groups have engaged in other types of actions, such as demonstrating in traffic or going on hunger strikes, and are demanding their respective governments halt fossil fuel production and embrace environmentally friendly energy. They are also both funded by the Climate Emergency Fund, an LA-based organization created by three millionaires in 2019 to support environmental activism.

“It was created to try and bring attention to this terrifying trajectory,” said Trevor Neilson, who co-founded the fund along with Rory Kennedy, daughter of Senator Robert Kennedy, and Aileen Getty, granddaughter of oil tycoon Jean Paul Getty.

The two groups have received $1 million from the California fund

The fund has financially supported 86 organizations since its creation. Just Stop Oil has received $920,000 since 2020, while Ultima Generazione has been funded with $80,000, according to Climate Emergency Fund executive director Margaret Klein Salamon.

“These protests are so awesome,” said Salamon. “People come to this museum to look at this painting, but we need them to look at the reality of the climate emergency instead.”

Salamon believes these disruptive protests are influential because they help recruit more activists and gain significant media attention. She added that European climate movements have gained more momentum than those in the U.S., in part due to the continent’s more lenient legal repercussions surrounding protests.

The Climate Emergency Fund is the primary funder for both Just Stop Oil and Ultima Generazione, according to Salaman, although she highlights this funding is only used for legal activities. “These groups do participate in high-stakes civil disobedience, but we don’t pay for that.”

However, this distinction can fall into a grey area.

“They’re funding our whole campaign,” said Bertini. “The funding really goes toward us taking action. They help support us, support the whole organization, a lot of people behind the scenes. It’s really directly helping us do what we’re doing.”

Ultima Generazione plans to embark on much more significant actions than museum protests in the future, according to Bertini. “Our goal is disruption.” 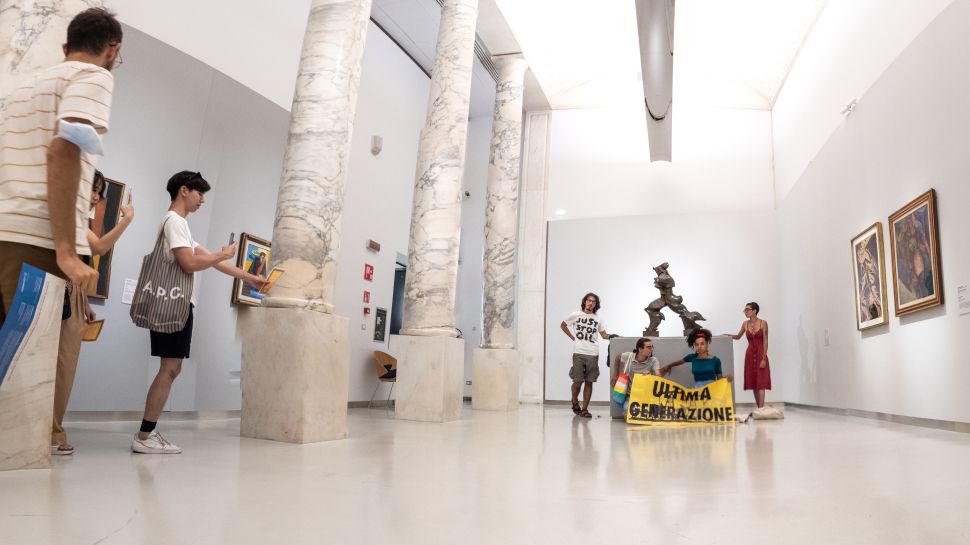