By the end of the day, of course, everyone knew, and regardless of one’s geographical distance from the deliberate airplane crashes in New York City, Washington, D.C., and Shanksville, Pennsylvania, the September 11th attacks shook individuals around the world and left a scar on the American psyche. No one reading this today needs further explanation or itemization of the impact of 9/11. There are no words.

There might, however, be music, or so hopes Tony Anderson. Anderson, a self-taught composer of cinematic and ambient music with over 400,000 monthly listeners on Spotify, has spent the past year working on Debris, an album inspired by the collapse of the World Trade Center and its aftermath. The album’s scope eventually expanded to include an accompanying compilation of restored video from the attacks and new, authorized footage from the National September 11th Memorial Museum captured by himself and director Mitchell Mullins. It’s a project that Anderson has felt compelled to complete.

“Debris is what I would have done if time and money were not constraints,” says Anderson, who spoke with the Observer over a Zoom call from Los Angeles last week. “It just was on my heart and mind, and I thought ‘I’d like to take a year and really think about doing something that takes someone to a physical place.’” Anderson speaks of his music and the events that inspired it with thoughtful and precise language. He has not approached this subject haphazardly. Debris is the culmination of years of study, of compiling video footage from the day, of speaking to victims and their families, of meditating on this flashpoint in history and its reverberations. He knows that he is uncommonly fixated on 9/11, and to this day he can’t explain why. “This is the only thing in my life that I have no words for, but I have the strongest draw to just do it.”

The last time Anderson felt such a creative compulsion was in 2019, after losing his mother to cancer. The resulting piece of music, Ariana, allowed him to process both his grief over her death and the joy that she brought into his life, and he says that he received emails from listeners — listeners who had no way of knowing what the piece was about — saying that it had helped them feel connected to their own lost loved ones. Anderson hopes that following this same urge to express the tangle of emotions he still feels around 9/11 will help others to process their own.

But, how does one go about composing what is essentially a soundtrack to a national trauma with global consequences? According to Tony Anderson, it requires allowing a listener to explore a space while leaving behind as little of his own fingerprints as possible.

“The way I’ve thought about it is that everyone has their own way of processing and coping with this, so the goal would be to try to make something that was malleable enough for people to set themselves in and be inside of and not get in the way. So, my hope would be, I don’t get in the way of what people need to feel and process, whether it’s rage or grief or sadness or nothing.”

This philosophy manifests itself in a twenty-three minute piece of music that rests almost entirely on a single chord, a C Major. The piano sketch that was the genesis of the album, “2,977,” was more melodic and expressive, a fairly conventional piano composition. As Anderson began to pair it with footage from the day that he’d compiled with friend and director Mitchell Mullins, and to workshop the piece with musical colleagues, even the spare, muted piano melody felt manipulative. Anderson and company quickly drew the conclusion that it would be inappropriate — disrespectful, even — to attempt to overlay one individual’s emotions over an event that evokes such, differing, deep, and complex feelings from each listener. Anderson stripped down the music to its barest foundations and focused his attention on producing an atmosphere of meditation that would place an audience in the historical moment where their own thoughts and feelings could reverberate. The strings, piano, and vintage synthesizers in Debris pulse in and out like long breaths, their recordings carefully degraded on analog tape to match the quality of twenty-year-old source audio and video.

Deciding what sound clips to use from broadcasts and home video of ground zero was a delicate process. Where was the line between evocation and exploitation? To help find the right balance, Anderson solicited advice via Instagram and eventually reached representatives from the FDNY, who helped guide his curation process. The finished Debris includes clips from Peter Jennings’ live newscast, and the sound of passing sirens. The crashes of the planes into the towers are omitted. There are no screams. The sonic centerpiece is a processed audio clip of the collapse of the two buildings themselves, which feel like a long, slow, lung-starving exhale.

“I really wanted to stress that,” says Anderson. “Not to shock people with it but to help them understand the gravity and the intensity of the inertia that came down.” He feels that this was the one piece of source audio that was essential to the album. Anything more visceral than that, he says, became exploitative. “I took a play from Peter Jennings’ book. He said, our job in the media is not to manufacture emotion and be frenetic or come across as anxious. We are assuming the audience is already feeling those things. Our job is to be as calm and neutral as possible to allow them to feel what they need to.” Rather than retraumatizing audiences, Anderson hopes that this soundtrack will help those reflecting on 9/11 to keep their heart rates down, even when it accompanies the shocking documentary footage that he and Mullins have assembled.

“The topic of 9/11 is heavy by nature,” says Mullins to the Observer on his work on the documentary. “Keeping the footage grounded in reality without dramatizing the story was really important to us when approaching the edit.” Anderson spent five years collecting, organizing, and properly crediting footage from the attack, which Mullins has been editing with him for months. “As a filmmaker/director/editor, it’s been an incredibly humbling experience and I feel as if this project has pushed us in ways we hadn’t expected.”

After workshopping the project with members of the FDNY, Anderson and Mullins approached the National September 11th Memorial Museum, where it caught the attention of Assistant Communications Manager Grant Kinsaul. Kinsaul endorsed the project for potential inclusion in the museum, and offered Anderson and Mullins private access to the memorial fountain so that they could record new footage that would give their documentary a sense of peace and closure.

Anderson hopes that the presence of his and Mullins’ work, either in the museum or on YouTube, will be a useful resource for Generation Z, who have no memory of 9/11 but have nevertheless lived their entire lives in its shadow. He worries that the event has become flattened in the eyes of a public that did not witness it, reduced to a death toll flashed on screens once a year and muddled by decades of conspiracy theories enabled by a government that remains insufficiently transparent on the subject. Even as someone who was conscious of the tragedy when it occurred and has remained fixated on it for the rest of his life, Anderson admits that he didn’t realize how little he actually knew about the attacks until he visited the memorial in person. He fears that the humanity of the events will be lost, that future generations will obsess over the melting temperature of steel but never bother listening to the 911 calls of office workers trying to survive on the griddle-hot floors above the blaze. Anderson has been down the conspiracy rabbit hole himself, and found no satisfaction there. And so, with both the album and the accompanying footage, he seeks to create an easily accessible and reasonably unbiased means by which to experience this moment in history, process it on one’s own terms, and avoid spiraling into Hell.

Though twenty-one years in the past, Tony Anderson believes that the urgency of processing our collective trauma from the September 11th attacks has not diminished. He finds echoes of it in the modern day plague of school shootings.

“When this last one happened in Texas, it shook me in a new way. It feels like the same sorts of acts of violence keep happening in schools and nothing’s changing. How does America move on and find closure when the cycle of insanity continues to repeat itself? There still seem to be some loose ends that have not quite been identified and wrapped up from the 9/11 attacks. I really believe that unless we are made whole in a few ways, from that attack and the way it’s affected everything since then, that we may not have the presence to engage the current struggles.”

Throughout his composition process, Anderson has found hope in the way New Yorkers bound together in the immediate aftermath of the 9/11 attacks, and the profound effect that they had on him even as a young man who, until that Tuesday, had never even heard of the World Trade Center.

“When people tell me now that our country is going to hell in a handbasket, I think, that is not our track record. When we have to change, when we’re forced to change, when we’re dealt incalculable odds, New York is the metric for how human beings actually treat one another. And you guys showed up, and you continue, and I believe that the fabric of New York is still very much alive and very intact. Your city showed up in a way that demonstrated the soul of America. And I’ll never forget that. So, there is a sense of hope in the music, and it’s meant to honor how you all dealt with this. I don’t think anyone who wasn’t in New York can ever understand that, but we can learn from it.” 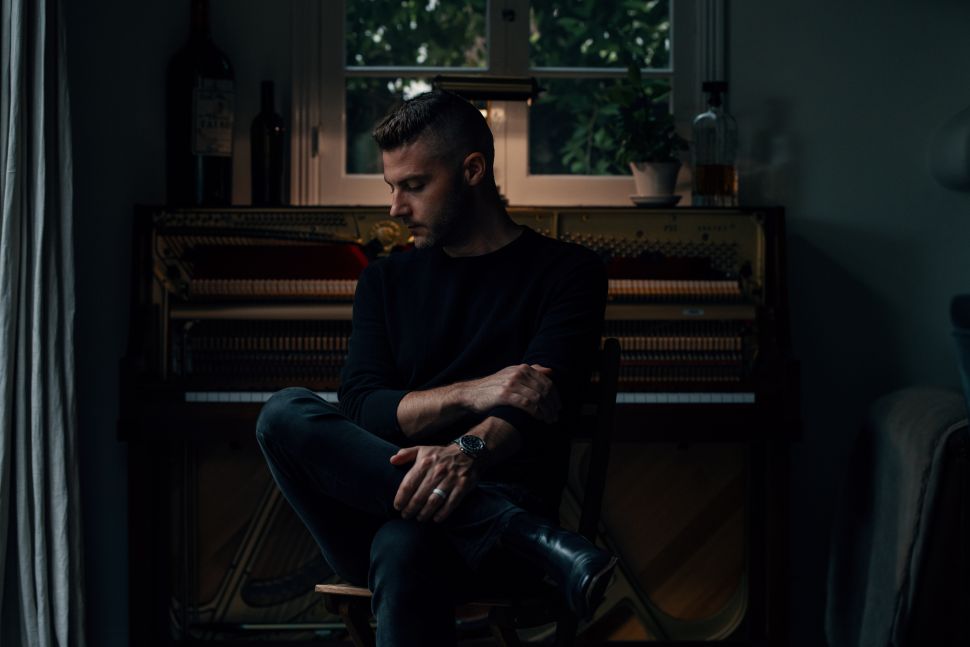