It takes a special kind of cynic to stand beside the Revson Fountain in Lincoln Center, gaze up at the Chagall murals inside the opera house, and not feel the tiniest bit thrilled. The beloved limestone Lincoln Center campus, now six decades old, warmed and smoothed by the patina of age and use, is a bright spot in a part of the city that can feel aesthetically and spiritually bereft. The eye relaxes when it lands on this island of bone white elegance in an ocean of corporate monoliths.

Lincoln Center’s newest addition, the refurbished home of the New York Philharmonic, David Geffen Hall—named after a 100-million-dollar gift from the billionaire and entertainment industry magnate—will have its grand opening on October 8. On the day the hall opens they will perform in an immersive multimedia performance of Etienne Charles’ San Juan Hill, which tells a story through music, and original first person accounts, of the neighborhood that was destroyed to build Lincoln Center. The renovations are nearly complete, and the Philharmonic is now rehearsing in its new home while the paint is drying, and the balcony handrails are still wrapped in plastic.

The hall was stripped and reshaped and now bears little resemblance to the old Avery Fisher Hall, visually or acoustically. As the home of the New York Philharmonic, sound was prioritized in the redesign of the new hall to an almost fanatical degree. This was an understandable precaution given the hall’s use as well as its history. When the hall first opened in 1962 as Philharmonic Hall, the acoustics were notoriously awful. Musicians couldn’t hear each other on stage. The New York Times called the sound “antiseptic” and “weak in the bass, with little color and presence.” The original acoustic consultant, Dr. Leo L. Beranek was fired, and the hall saw a major renovation and in 1976 reopened as Avery Fisher Hall. The renovations improved acoustics, but audiences still strained to hear at the back of the hall, and music from the bass instruments got lost in the vastness of the space.

The most noticeable acoustical elements in the architecture of the new hall are the vertical and horizontal lines along the sidewalls. Paul Scarbrough is the principal acoustician at Akustiks, which was selected in 2012 as acoustical consultants for the hall’s redesign. He told the Observer that this grid of lines, “introduce diffusion or scattering of the sound on some of the wall surfaces.” These lines vary in depth from two to fourteen inches and allow sound to be evenly articulated around the hall.

The grid is meant to have the same scattering effect that in a traditional European concert hall is created by dense ornamentation. According to Scarbrough, the architects and acousticians looked at the pilasters, moldings, and sculptures in concert halls like the Concertgebouw in Amsterdam and the Musikverein in Vienna and studied how much of the wall surfaces were flat and how much were layered to guide the different levels of articulation in the grid. In this way they are creating similar diffusions of sound at similar frequency ranges to a traditional hall.

Gary McCluskie is the principal architect at Diamond Schmitt Architects, which in 2015 won an international competition to redesign the hall. He told the Observer that they took inspiration from sound waves in the design of the articulated grid. “In the way that architecture is sometimes thought of as frozen music we were literally thinking of ways in which both the material in the wood and the shaping of that architecture could have a musical character,” McCluskie told the Observer.

From the warm brown beech wood walls to the brass and bronze railings along the balconies, the architects drew their inspiration from musical instruments. “The concert hall itself is a big musical instrument,” McCluskie told the Observer. “It is the way in which all the different sounds of the orchestra are blended together.”

This idea that the Philharmonic and its audience is nestled inside the body of a huge violin is lovely, and yet the space is more conceptually interesting than visually arresting. The grid along the sidewalls struck me less like soundwaves and more like a giant Excel spreadsheet. Which isn’t to say that it’s not beautiful, in its way. We belong to a culture that knows how to create beautiful spreadsheets. Likewise, the twisted ribbons of wood over the digital organ loft are impressively grand, and yet reminiscent of paper that’s gone through an office shredder. These elements lead me to wonder if the architects were inspired more by the objects in their offices, or by conference rooms and convention centers, than by musical instruments and concert halls.

The beech wood walls create a loungey mid century aura, in keeping with the historic aesthetics of the Lincoln Center campus. Yet, the paneling is also reminiscent of many elementary school auditoriums, last renovated in the ‘60s or ‘70s. At the Metropolitan Opera, whimsical anachronisms are lovingly preserved in their glorious opera meets disco decor. However, the rather masculine minimalism of Geffen Hall doesn’t match up. This is in part due to the disconnect between the architecture and the furnishings.

The minimalism of the hall is contrasted with the décor of the upholstered seats and redesigned lobby. The floral motif of the seating was created by Tod Williams Billie Tsien Architects and mimics the rose murals in the sumptuous new lobby. They are meant to suggest petals falling from the ceiling, with splashes of red, pink, and purple petals in patterns that vary from seat to seat. It’s a playful design in an architectural space that’s deadly serious. The combination of floral decadence and architectural sparseness looks like a clownish error. I viewed the space during a rehearsal without an audience or theatrical lighting so perhaps this effect will be transformed or mitigated during performance. However, from what I saw, compensating for the room’s minimal three-dimensional ornament with a profusion of petals gives an overstuffed and garish look to the furnishings. Where separately elegant, in combination they are discomfiting, probably unintentionally so.

That being said, David Geffen Hall will most likely be a great space for listening to classical music. 500 seats smaller than Avery Fisher Hall, it is an intimate, focused, and meditative space. There is no proscenium, and the orchestra is brought deeper into the audience, the eyes of audience members drawn to the stage by the curved balcony tiers and the grid along the sidewalls.

The seats are democratic, with the stage decently visible even from the back of the third tier. The most delightful aspect of the hall might be the choral balcony, which will be open to audience members when a choir isn’t in use, allowing the orchestra to be viewed in the round. Audiences will be able to see orchestral performances with the conductor facing them. They will be closer to the timpani and woodwinds and the sound of the orchestra will present differently in these very special seats.

Like its predecessor, Avery Fisher/Philharmonic Hall, David Geffen Hall is meant to last for a generation. It is meant to accommodate the transforming orchestral music world for a century to come. Given its geographical placement, it may well be the last big renovation the Lincoln Center campus sees. The bone white island could easily be underwater when next in need of major refurbishment. David Geffen Hall’s spare yet intimate swan song to Lincoln Center’s golden era is charming, thoughtful, and a little sad. Third go around, after sixty years of trying, they’ve hopefully gotten the acoustics right and created an excellent space for playing and listening to music. I hope for the sake of the future of classical music globally that they will be able to fill this hall with audiences of all ages for a generation to come. 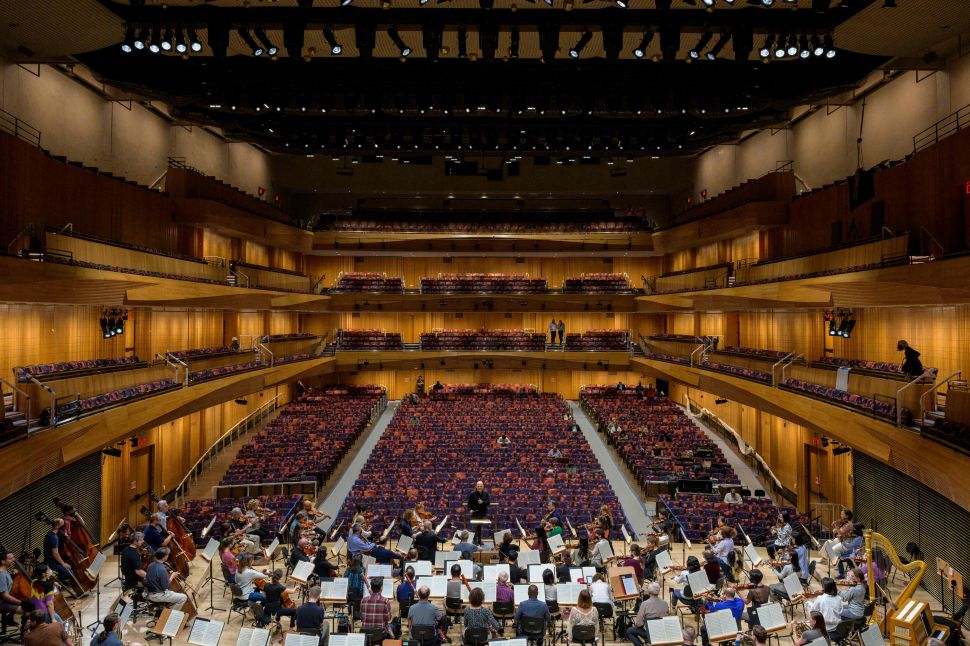