A quality cast of high-profile television actors—Dominic Fumusa (from Nurse Jackie), Jessica Pimentel (from Orange Is the New Black) and Abigail Hawk (from Blue Bloods)—labor mightily to make a convincing (if unusual) case for straying affections don’t necessarily leading to adultery.

Fumusa and Pimentel play working-class New Yorkers, Drew and Andrea, whose marriage is stretched to the bickering point by the never-seen title character, their ill-since-birth son who is intubated in the adjacent bedroom. So saturated with tubes and wires and hooked up to machines is he that they’ve never been able to hold him—which is several degrees beyond a similar case in Peter Nichols’ A Day in the Life of Joe Egg. Doctors gave the boy a year to live. He is now eight. Andrea holds on to the frail hope he’ll be cured and normalized; Drew knows better.

Resigned to the inevitable, Drew suggests a second chance, another child, but Andrea won’t hear of it. He finds some relief from his mental prison on the subway: Shayla (Hawk), an upscale, susceptible divorcee, who—best of all—is pushing a toddler in a stroller, four-year-old Tyler. Drew tells Shayla he has no children (possibly because he really feels that), and a let’s-pretend father-son relationship begins to form. Through the real and fantasized curves of what follows, there’s never any doubt that Drew loves his wife.

Fumusa holds that line beautifully throughout the play. (Shayla and the also-never-seen Tyler are another story.) “I think he does love his wife very, very much, and I think he loves his son very, very much,” the actor says. “It’s just a perfect storm in that moment in the way that only plays and movies can create. We’re just asking you to go along for the ride: ‘Okay, here’s a chance for him to get to know this little boy and his mother.’ It’s a difficult set of circumstances.”

Katie McHugh, who directed the play for Yonder Window Theater Company, told Fumusa early on, “We probably should not like Drew as much as we do, but we understand his motives.”

Fumusa agrees: “It doesn’t work if it’s about both infidelity towards his wife and infidelity with this child. It gets muddied. It sends the kind of message that may not be as nearly relatable. Drew and Andrea are in a difficult position after all these years. It’s possible to completely love each other and completely love this child, but still they have PTSD. They are traumatized by the experience.”

The actor took an instant liking to the script. “My agent sent it to me around the end of June. I remember looking at the dates and seeing it was going to begin rehearsal at the end of July. My wife and I had already rented a house in Martha’s Vineyard for a few weeks in August, and I was not necessarily looking for a play to do at that time, but I was so taken with this one that I said, ‘Honey, you’re going to kill me, but I gotta do this play.’”

Fear was his attraction to the play. “Years ago, my good friend—he’s a playwright—Stephen Belber told me that Marsha Norman, a playwright who taught at Juilliard, used to tell her students to write what scares them. I thought that was great advice and said to myself, ‘I’m going to try to act what scares me’ because I think when you’re involved in something that challenging, it suits you better. This play scared me. I’m a father, and I really connected with what Drew is struggling with.”

In addition to McHugh, Fumusa has another woman calling the shots: Judi Lewis-Ockler, Intimacy Director. “That’s a new phenomenon in the industry,” he says. “It’s terrific. It takes all of the anxiety out of those situations because you are very upfront about what you are comfortable with and what you’re not comfortable with. You talk it over. Back in the day, it used to be you get thrown into this love scene and nobody knew exactly what was going to happen. The director was usually pretty hands-off: ‘You guys figure it out. Do whatever you want.’ But it’s very awkward, so it’s great to have that person in the room with you and the director.”

Jasper is Fumusa’s first time on stage in eight years. “The last play that I did was Sarah Ruhl’s Stage Kiss at Playwrights Horizons. We sure could have used an intimacy director on that one because Jessica Hecht and I were kissing and kissing and kissing through the whole play.”

Would an intimacy director have come in handy when he did the 2002 original edition of Richard Greenberg’s Tony-winning Take Me Out in London and at New York’s Public Theater?

“Well, that’s a whole different story,” he points out. “There was no intimacy in the sense that there were no love scenes. It was just nudity. You were either up for the nudity or you weren’t.

“I did that play when I was 30 years old, and it was not terribly hard to do. I would not want to do that play now. You get older. Your sensibilities change a bit. Also, when we did that play, the internet was very young, and the idea of someone taking a photograph and putting it out on the web was very foreign to us. Now, of course—look what happened with the revival. It’s a totally different world.”

Despite his infrequent appearances of late, Fumusa considers himself more of a stage actor than a television actor. “Let me put it this way: I didn’t get my SAG card until I was nearly 30. I only did theater in my teens and 20’s. I love film and television, but I breathe when I’m on stage.”

It was his stage work that got him Showtime’s Nurse Jackie. Title player Edie Falco had seen him, and liked him, in a play—and picked him for her series husband at his first reading. “Edie’s a rare combination of brilliant actor and one of the kindest, most down-to-earth people you’ll ever meet.

Unlike most series actors, Fumusa lives in Brooklyn with his wife—Ilana Levine, an actress who hosts the podcast Little Known Facts—and their two children, Georgia and Caleb.

“I’ve never lived in California,” he says with a tinge of pride. “I’ve spent a lot of time there, and I’ve worked there a bunch of times. My wife and I made a conscientious decision to stay here. My wife is from here. I came here to do theater. I love New York and never wanted to live anywhere else.” 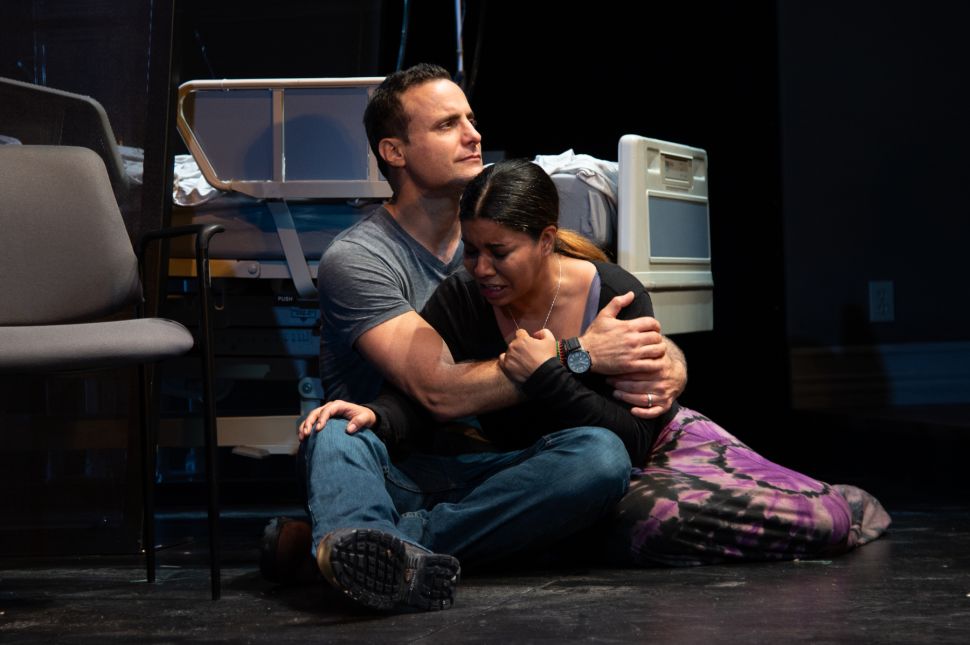