Want to hang with Ted Lasso and AFC Richmond? That’s the simplest way to parse a portion of FIFA 23, Electronic Arts’ sprawling new soccer game. The marketing hype is clear: as always you’ll play with real-life soccer stars, which has been the case for almost three decades of EA soccer games. But the added joy of FIFA 23 — the 30th installment in the popular Electronic Arts soccer series which has sold over 300 million copies — is that you also get to command the Emmy winning male actors who populate an Award winning Apple+ streaming show.

Before getting into the limited bells and whistles of the Lasso portion, some context: there are video game series like Grand Theft Auto that take years to create, but others, like EA’s sports series, are released yearly with a laundry list of new players and updates. They’re often given impressive-sounding names like Next Gen Hyper Motion 2 Technology — fancy wording that means smoother play and more animations that help amplify your game experience.

Why add fictional characters? Ted Lasso may confer a sense of added value — game cred and  Hollywood cred too — which you maybe need if you’re asking already committed fans to plunk down another $70 for the PlayStation 5 or Xbox -Series X game and feel good about it. Plus, there’s the warmth and empathy of Ted Lasso that’s a rarity in the sports gaming world — the only sports game that ever has brought forth the depth of family or friendship drama was the Spike Lee basketball narrative written for NBA 2K16 called “Livin’ Da Dream.” At the end, I teared up.

But even after all these long years of billion-dollar gaming profits outshining the film industry, video game makers and fans still have a love/hate attitude toward Hollywood. Hollywood doesn’t understand games, except when they do, which is rarely. So adding Ted Lasso to FIFA 23 is a tough tightrope to tread, and you can imagine the potential negative results being hotly debated in conference rooms at Electronic Arts: is it really for the core fans or is it just a way to boost sales by tempting TV viewers? For core fans around the world, playing FIFA daily is a lifestyle; it’s a sports simulation that can be very deep and complex as you manage your team and bring your players up the ranks. You don’t want any fluff getting in the way.

I’ve played about 15 iterations over the years and I know that newcomers shouldn’t dive into a game without going through a fair amount of tutorials for offense and defense, which EA tries to make enjoyable. But they are indeed tutorials, they’re not that fun, and some folks really want to get right into a game. Which is what I wanted to do with Ted Lasso, except Ted Lasso and his AFC Richmond buddies are really difficult to find. The user interface has been always been complex in EA Sports games, and that’s partially a good thing. There are so many modes of play, as coach, as team player, online, offline, with famed players, and career mode, in which you start out with few skills and move up the chain. When you’re looking for something in particular, like Ted Lasso and his team, the search through the varied menus is as daunting. (I had to go to a game journalism website to find it.) Both Lasso and the Team are tucked in a menu called “Rest of the World.” In other words, it’s hidden like an egg in a scavenger hunt.

Playing as Ted Lasso, the manager, is banal and disappointing. While Ted’s visage is a near perfect animated rendering, there’s no sense of humor here. In fact, I never heard him say a word in manager mode, which is about strategizing — and too many email messages. In your inbox you’ll find serious stuff about possible trades and marketing the team. They’re from different characters, but they seem to be written by the same person, who’d win a prize for blandness.

Ted doesn’t say a word when you play a match, either. You’ll catch him gesturing and moving around off the pitch, but he doesn’t really react much to plays on the field. I tripped an Irish player multiple times to see if I could get a reaction from Ted that somehow mimicked how Jason Sudeikis portrays the character on the show. It was a fool’s errand.

Playing as Roy Kent, Jamie Tartt and Dani Rojas is indeed enjoyable in an EA Sports FIFA 23 way. The field looks amazing, right down to the blades of grass. The stands are full, and the rowdy, team flag-waving crowd goes wild when you score. Multiple camera angles offer replays that are better than those on a stream or TV. (If you’re on an opposing stadium and play badly, fans may sing a taunting “Nah, Nah, Hey, Hey Goodbye,” which is deflating to hear.) But Kent, Tart and Rojas, the show’s most enthusiastic player, never say anything either. I did see Rojas do a cartwheel after the goal I got, which was very much in character and caused me to shout “How cool is that?” out loud. But that was one of the only times I felt the excitement that comes with meta familiarity.

Clearly, EA Sports didn’t want to bring a full Lasso experience to the fore, not even on their home page. It makes me ask if they paid for to license Ted Lasso or if Apple paid EA a fee for promotion? (I asked EA’s PR team but I didn’t get an answer.)

There is a good amount to like in FIFA 23 this year. When I wasn’t playing AFC Richmond, I dove deep in the new women’s soccer mode. That’s, thankfully, right up front on the TV screen, and you can play as Chelsea’s Sam Kerr, the amazingly talented Australian who’s won the Golden Boot on three continents. The ability to play as women is something EA is indeed proud of, and Kerr is featured on the cover to the right of French male phenom Kylian Mbappé. As you run up and down the field, a stunningly well-chosen mix of 100 songs, everything from Bad Bunny to Yeah Yeah Yeahs, gets you in the mood to play more and more.

This is the last year that EA will hold the license to FIFA. That doesn’t mean the company won’t have a soccer game next year, but it does mean they won’t have a World Cup mode inside. (FIFA wanted to double their $150 million yearly license fee, and EA balked.) That means there’s time to create something special with Lasso and AFC Richmond, like a standalone story mode as full of emotion as the Spike Lee basketball story in NBA 2K16. It could be a tale that has the signature Lasso humor, positivity and inspiration. That seems pretty unlikely to happen. But I like to remember that sign of hope outside of Ted Lasso’s office: “Believe.” 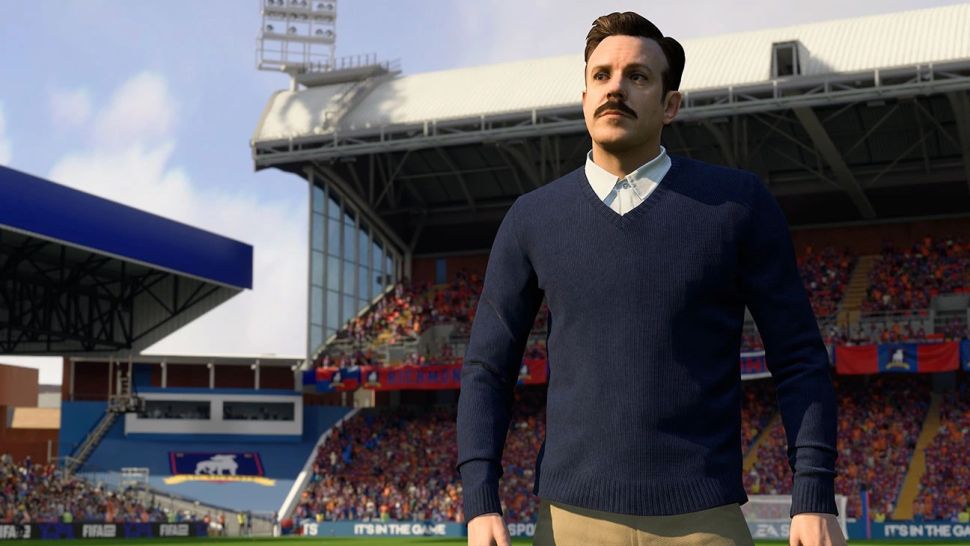