Xavier Chavez first saw Funko Pops while working at a comic store 15 years ago. He dismissed the vinyl toys a fad. “My first thought was that these are the new Beanie Babies,” he said.

Today, however, Chavez works at a desk lined with his own personal collection of Funko Pops. And Heritage Auctions, the Dallas-based auction house where Chavez now works as consignment director, is currently in the midst of planning an auction exclusively dedicated to Funko Pops for next spring. “I’ve turned around because I’ve seen the market,” Chavez said.

Founded in 1998 in Snohomish, Washington, Funko began as a company selling bobbleheads, the nodding figurines historically given out at baseball games. But in 2004, the company introduced the Funko Pop! line, small plastic toys with disproportionately large heads based on the likeness of pop cultures figures. Funko is now the self-proclaimed “world’s largest proprietor of licenses,” with thousands of Pop characters representing celebrities real and fictional, from the late Queen Elizabeth II to Dory from Finding Nemo.

As with other forms of collectibles like comics and autographs, the value of Funko Pops has skyrocketed since the Covid-19 pandemic. The company, which went public in 2017, reported more than $1 billion in net sales for 2021, a 58% increase from the previous year. Meanwhile, the secondary market for Funko Pops is worth an estimated $700 million to $1 billion, according to Funko CEO Andrew Perlmutter.

Pops are so lucrative that they’ve even been targeted by thieves. A shoplifter fled a Manhattan Barnes and Nobles with Funko Pops in tow on Sept. 10, knocking an elderly woman unconscious in the process. Meanwhile, previous Pop robberies have taken place in Orlando and Washington.

While the typical price for standard vinyl Pops range from $10 to $20, prices are ratcheted up on the resale market. Funko Pops based on the character Alex DeLarge from 1971 cult film Clockwork Orange typically go for upwards of $25,000, while Disney’s Dumbo elephant fetches $7,000. In May, a special edition Willy Wonka Pop sold for $100,000, the most lucrative Funko Pop sale yet. After the private sale, Chavez started seeing forgeries of the figurines. “That’s when you see a market becoming a serious collectible, when people start trying to make fakes,” he said.

Funko’s figurines have garnered parallels to Beanie Babies, the plush animal toys which caused a collecting craze in the 1990s. However, unlike the eventual crash of Beanie Babies, Chavez believes Funko Pops aren’t a fad but a true collectible.

The backing of third party companies is a signifier that Funko Pops are here to stay, said Chavez, pointing to Professional Sports Authentication (PSA), a U.S. based grading company which already authenticates Funko Pops and will soon begin grading the quality of the vinyl figurines.

While the most valuable Pops typically stem from limited edition releases, Perlmutter claims the company doesn’t purposefully manufacturer scarcity. “It’s not for secondary value purposes,” said the Funko head. “When we make a limited item, it’s usually because we know that the audience isn’t that great.”

Perlmutter also believes nostalgia plays a large part in which Pop characters see spikes — the Golden Girls and Bob Ross have been some of Funko’s most successful drops. While other toy companies sell to moms with kids, Funko Pops is focused on the moms themselves, according to Perlmutter, who said 35 is the average age for Funko buyers. “It’s a very different demographic.”

Funko Pops have also evolved into a currency for autographs, according to Kirk Staff, production manager at VVGS, an Alabama-based company specializing in sealing Pops in protective acrylic cases. “You used to get an 8×10 poster signed by Robert Downey Jr., now you get an Iron Man Funko Pop,” he said.

Staff believes the appeal of Pops is its variety. “Generally, there’s a musician or TV show or book, something that you have some personal connection towards,” he said. “Pops are the embodiment of that thing you have affection for.” 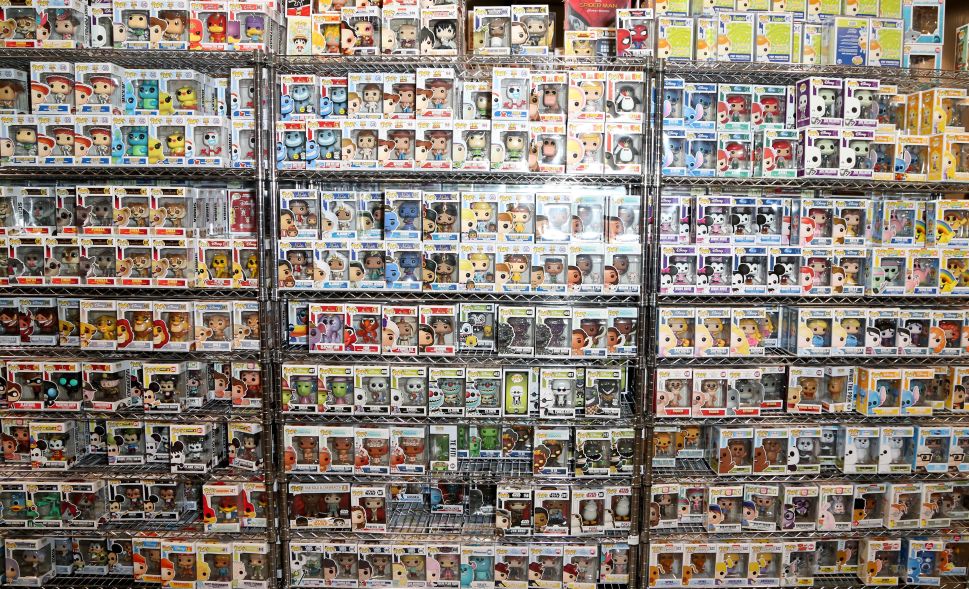