People view the world through the lenses of their own experiences, whether that’s religion, culture, or, as artist John Mack believes, media. “A Species Between Worlds,” a photography exhibit by Mack, asks visitors what remains when those lenses are removed. Located at the Skylight Modern in Chelsea, New York, “A Species Between Worlds” opened free to the public today, Sept. 1, and will remain throughout September.

Globally, people spent an average of almost seven hours online every day in 2021, with the U.S. average at more than eight hours. Just as the printing press sparked social change in the 15th century and television in the 20th century, the digital media we consume is increasingly impacting the realities around us. In 2016, a stampede in Taipei, Taiwan stopped traffic as hundreds tried to catch a rare Pokémon in the augmented reality (AR) game Pokémon Go. Online social technologies are continuing to mature with the development of the metaverse, which critics fear will negatively impact the mental health of its users.

Netflix’s 2020 docudrama The Social Dilemma, viewed by more than 100 million people, revealed how social media companies built addictive mechanisms into the algorithms to then sell its users’ attention to the highest bidding advertisers. “A Species Between Worlds” reminds users that when we point a finger at media companies, we are also pointing three fingers back at ourselves.

The exhibit combines art and technology to warn of reliance on the latter. And ironically, visitors will not get the full experience without a mobile device of their own. The tour begins by downloading an app, which creates an avatar for each visitor. Screens surround the room with screen-shotted Pokémon Go landscapes of U.S. national parks. When visitors hold their phones up to these landscapes as if they are taking a picture, the app reveals Mack’s photographed image of the park. The Pokémon Go landscape is almost comically basic—a flat image with green to represent land and blue to represent —where Mack’s photographs have color, depth, and perspective.

Pokémon Go, released in 2016, offered an early taste of what the metaverse could look like on a large scale. The game mapped out landscapes around the world, and users could look at their phone screens to find Pokémon, or “pocket monsters” that could be used in virtual battles. Pokémon could be found anywhere, from in a player’s backyard to in the Colosseum in Rome. Mack’s exhibit inverses this experience. Instead of standing in front of something real (trees, a river, etc.) and looking through a phone to find something virtual (Pokémon), exhibit visitors view the augmented images on screens and must look through their phones to uncover what the landscape really looks like.

In just six years since Mack’s project began, world-building technology has greatly advanced. Today, entire major league baseball stadiums exist in the metaverse with detail down to the leaves on trees. It gives the illusion of depth, color, and perspective, similar to being there in person, but “it is still a flat screen,” Mack told the Observer. “When a prison gets bigger, it’s still a prison.”

As visitors move through the exhibit, the “signal” weakens, which breaks down both the AR images and the visitors’ personal avatars. The landscape fades into a grayscale sketch, and the phone app reveals the three-dimensional wire frame of the image rather than the image itself. Words like “futility” and “apathy” appear on the screens to represent what some people feel when disconnected from online media, or according to The Social Dilemma, what social media companies have engineered its users to feel when offline.

Along with photographing national parks, Mack traveled to the Seven Wonders of the Natural World for this project. When entering the room with these images, a message appears on visitors’ phones saying, “The first Natural Wonder of the World is Nature itself. The first manmade Wonder of the World is boredom.” These screens are motion activated, so when a visitor stands in front of them, the image that appears is the Pokémon Go AR terrain. It takes stillness—or boredom—for the screen to reveal the photographed image.

In an interview with author Yuval Noah Harari in April, Mack said, “boredom is the closest thing to peace.” This statement holds true in the physical layout of the exhibit as well. After experiencing boredom, viewers enter the final room, where for the first time the screens display the real images rather than artificial ones—a total disconnection from the AR which began the tour, a restoration of reality, and maybe even a sense of fulfillment for viewers.

The tour takes viewers through feelings of control when viewing the AR images, a loss of control when the signal breaks down, and control once again when a phone is no longer needed to view images of the natural world. While Mack doesn’t cast technology as the enemy, he said he wants visitors to think about “the role they are playing in their own pandemic with digital devices.” 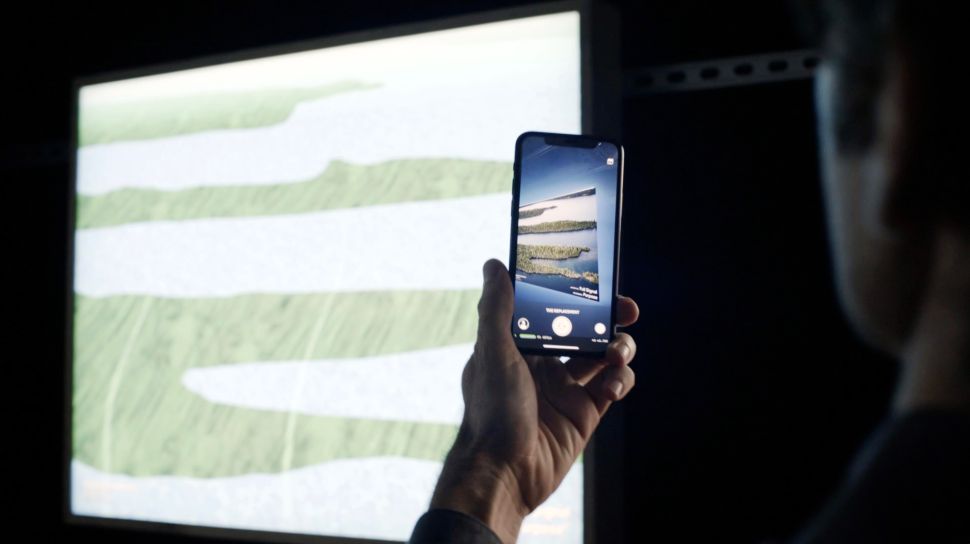