Earlier today, Queen Elizabeth II, the longest-reigning monarch in British history, was laid to rest in a state funeral at Westminster Abbey. Over 2,000 guests, including royals, world leaders and foreign dignitaries, attended the solemn occasion, paying tribute to the late Queen.

Kate Middleton also paid homage to the Queen with her carefully selected fashion today; in particular, with her jewelry choices. The Princess of Wales’ ensemble was fitting for the somber occasion; she wore an all-black coatdress (it’s reportedly custom Alexander McQueen, and is similar to a white version the then-Duchess of Cambridge wore for the Queen’s Platinum Jubilee celebrations earlier this year), with black stockings, pointed-toe suede pumps and a hat with a graceful bow and a simple black netted veil.

Princess Kate also wore the Japanese Pearl Choker, a necklace that belonged to Queen Elizabeth herself. The elegant, four-row pearl necklace, which features a diamond center clasp, was reportedly gifted to Queen Elizabeth by the Japanese government in the 1970s; the late monarch wore the choker several times over the years, including during a 1983 visit to Bangladesh, as well as to former Prime Minister Margaret Thatcher’s 70th birthday celebrations in 1995. Queen Elizabeth also loaned the necklace to the late Princess Diana, who wore it multiple times.

This isn’t the first time Princess Kate has worn the Japanese Pearl Choker, as she chose to don the necklace for Prince Philip’s funeral in April 2021, and to the happier occasion of the Queen and Duke of Edinburgh’s 70th anniversary celebration at Windsor Castle in 2017. 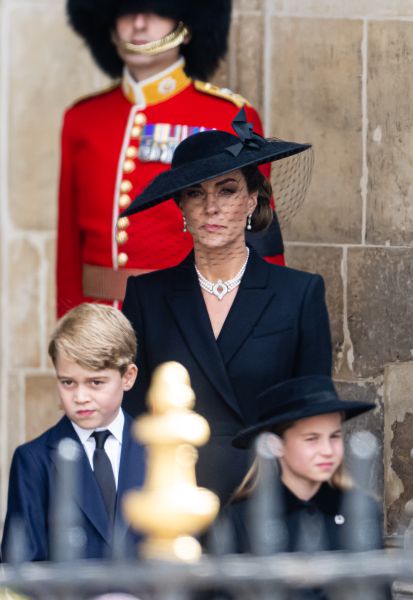 Along with the necklace, Princess Kate also wore the Queen’s Bahrain Pearl Drop Earrings today; they were created from pearls given to the then-Princess Elizabeth as a wedding gift in 1947.

It’s not surprising the Princess Kate, as well as Duchess Meghan and several other royals, chose pearls for the solemn day. Not only was Queen Elizabeth rarely seen without pearls, but pearls (in addition to diamonds) have become the traditional jewelry of choice for royal mourning periods, as the gem is notably colorless and more subdued, subtle and respectful than anything too bright and glittery.

Princess Kate and Prince William’s daughter, Princess Charlotte, also wore a sweet tribute to her great-grandmother today. The seven-year-old royal sported a diamond horseshoe brooch for the occasion, as a nod to Queen Elizabeth’s lifelong love of horses. The brooch was reportedly gifted to the Wales’ daughter by Queen Elizabeth, as Princess Charlotte inherited her late great-grandmother’s adoration of all things equestrian. 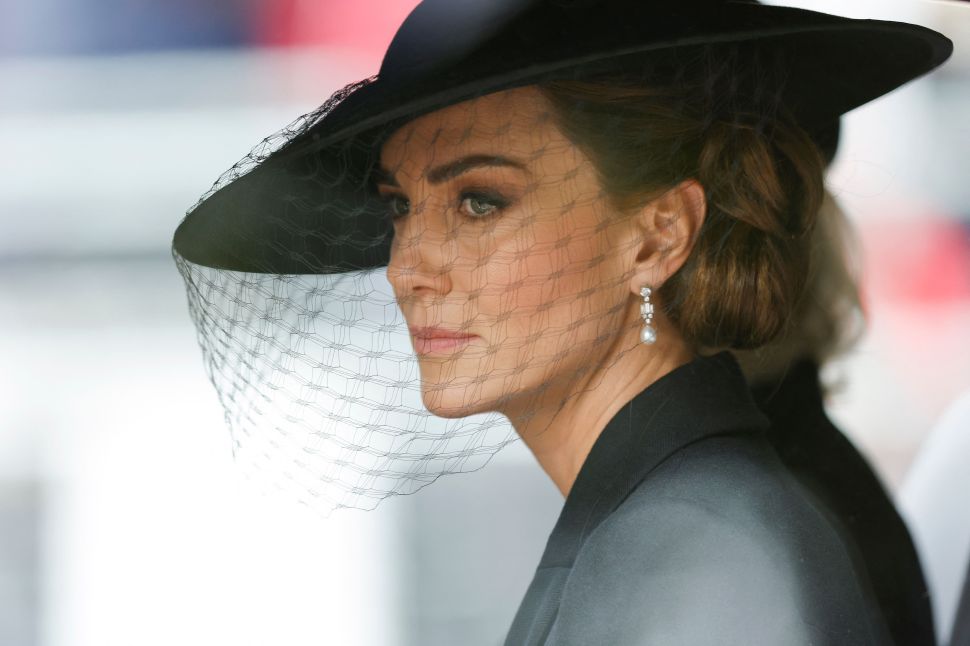